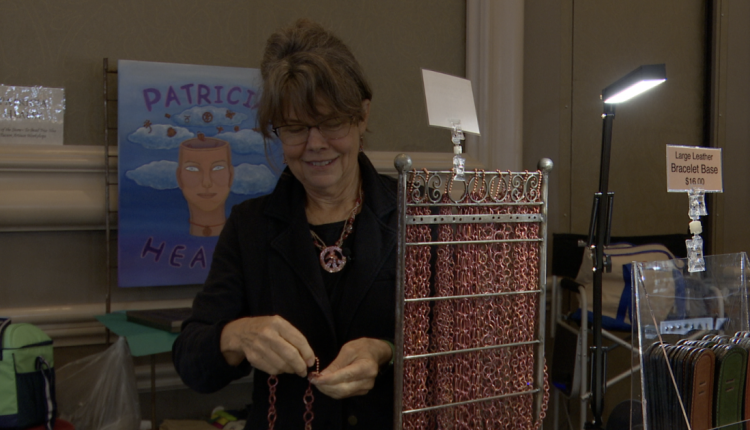 TUCSON, Ariz. (KGUN) — It’s a show that brings over a thousand people through its doors twice a year, but it’s not a performance the community gathers to see—it’s jewelry.

“We are the largest of the artisan gem shows in the world,” said Colors of the Stone Show Manager, Casey Kennerson.

Local artist, Patricia Healey, has customers from all over the world.

The Colors of the Stone gem show sees about a thousand people each day every fall and winter, seeing customers and artists from everywhere.

“They’re from all over the world. We do have some local Tucson artists as well; we always like to make sure we promote local artists,” said Kennerson.

Healey has been an exhibitor at the show for about 20 years.

“I just started out sharing a booth and I just had two trays of copper and now I have—I don’t even know how many trays,” Healey said.

She creates every design for her copper jewelry, beads and pendants.

The fall gem show gives exhibitors a platform to share the stories behind their art and to get face-to-face interaction with their customers.

Along with the face-to-face interaction, in-person shows also help Healey sell her work.

“Probably a good 50% of my personal income comes from in-person shows,” Healey said.

Healey said it’s not just about the income, but the reaction of her customers, both new and returning, keep her smiling.

“We work really hard in preparation and when we see that there’s a line waiting to come in, it’s really a good feeling that we just worked so hard and people came to the show to see our work,” Healey said.

Patricia Healey Copper will be at the Colors of the Stone show at the beginning of the year for the winter show.

——-
Faith Abercrombie is a reporter for KGUN 9. Faith joined the KGUN 9 team in July of 2022 after graduating Arizona State University in May. Share your story ideas with Faith by emailing [email protected] or by connecting on Facebook, or Twitter .