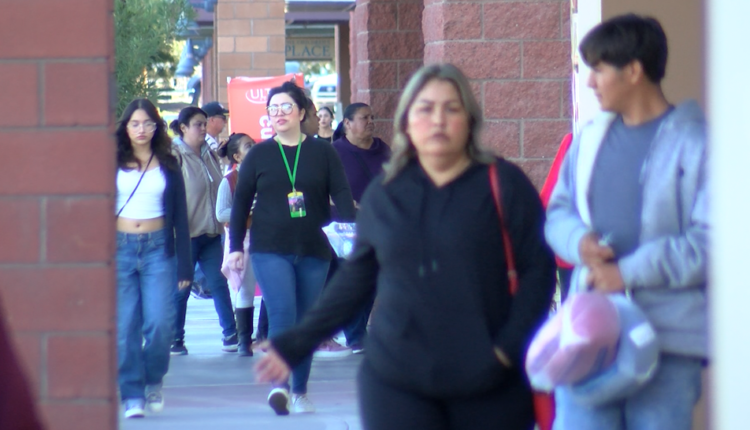 YUMA, Ariz. (KYMA, KECY) – It’s down to the wire with locals scrambling on one of the busiest shopping days this year.

Hundreds of shoppers are out and about at Yuma Palms Mall, just one day before Christmas Eve.

We spoke to several shoppers who told me just why they waited until the last minute.

One shopper Ruth Ceballos said she waited to go shopping because she was busy working.

Now, she and many last minute shoppers are having to deal with the holiday chaos.

“It’s very busy, very hectic. I can’t find the things that I want to find for people so it’s kind of hard because I’m last minute Christmas shopping so how am I supposed to buy something if it’s not there,” said Ceballos.

Another local says he was just braving the chaos for the great deals.

“I had a pretty dope deal on best buy’s flash sale for a 75 inch TV so I was like I’m gonna hop on it and the holidays are coming up so I decided to get it,” said Dylan Hermogeno.

And young shopper Chloe Diaz told me she was at the mall last minute to buy her parents Christmas presents.

“I got my mom a body scrub, and a coconut face mask, and I got my dad a coffee cup,” said Diaz.

And now she is patiently waiting for Santa to bring her presents.

“I’ve been waiting for it all year!” said Diaz.

The majority of shoppers said they knew this was coming, but for one reason or another, they still found themselves stuck in this situation.

Tucson gets millions for PFAS treatment