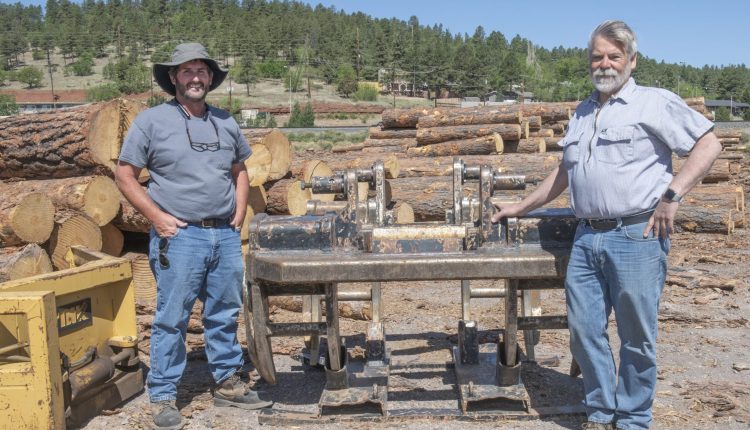 When forest restoration giant Wally Covington drives by the Ribelin Logging Co. sort yard on East Huntington in Flagstaff and sees the equipment up for sale, it makes him sad. “They are very good operators in the forest and had a huge impact on the community.”

With decades of experience, millions of dollars invested in logging equipment and a deep love for the forest, Ribelin Logging Co. President Ken Ribelin says the family-owned and operated business – a thriving logging company that at one time employed almost 70 people and could run 50 to 60 truckloads of timber a day – is closing.

“We really cared about what we did,” he said. “We hope our legacy is about bringing the image of the logging industry up. We always prided ourselves on what we did. We thinned a lot of acres, kept a lot of fire restrictions down and supplied a lot of jobs. Others looked up to us in what was going on on the ground.”

“It’s a huge loss to the community,” said retired Coconino National Forest Flagstaff District Timber Staff Officer Joe Luttman. “Ken is as much a conservationist as he is a logger. They were a very good company to work with, a very good company to be associated with and a very good company for the community. They were very conscious. I’ll tell you what. That company would do roads better than anyone else I ever worked with. Kenny was a stickler for details. He could tell you the cost per acre of running a skidder for one hour. He always followed the rules and regulations and was always trying to make sure the Forest Service was holding up their part of the agreement.”

“They had unbelievable integrity,” said retired Four Forest Restoration Initiative (4FRI) Operations Coordinator and former Forest Service Timber Sale Administrator Dick Fleishman. “Their contributions to the work around Flagstaff helped get this town a little bit safer. When we’d get fires in locations where they had worked, it was clear they had made a difference. They also paid good benefits to their workers at a time when other loggers wouldn’t take care of their people. And they were expensive. They wouldn’t drop their price to do their work because that’s what it took to do it right. In the timber sales going on now, some other companies struggle and the end results are more ground disturbance in the forest.”

Ken was 22 years old in 1974, when his dad, George, brought Ribelin Logging and the family to Flagstaff from Colorado in response to a request from Southwest Forest Industries, Flagstaff’s large sawmill operator. “When we came to Flagstaff, the logging companies did not have a good reputation. We tried to fix that. My father always taught us, ‘If something’s worth doing, it’s worth doing right.’”

Ken says, at the time, the logging companies in Flagstaff didn’t communicate with the loggers in the White Mountains. George changed that. “He was instrumental in creating the Northern Arizona Logging Association. The group would meet four times a year to work together on improving conditions for loggers and discuss how to prevent injuries and accidents. Sitting down and talking made things better.”

Fleishman was working as a harvest inspector on the Long Valley Ranger District of the Coconino National Forest when he first met George, who founded Ribelin Logging in Montrose, Colorado in 1958. “They were the first to actually be doing mechanical harvesting.”

Fleishman recalls the Dirty Neck Timber Sale near Clint’s Well as the first time he saw a tree seemingly moving by itself through the woods. It was being carried in the arms of new machinery, a log collector.

“Ribelin knew if you do the job right with the least amount of [forest] disturbance, you never had to go back. I learned so much from those guys. They were the best loggers by far. They would tell you how good they were, too,” said Fleishman. “There were five different large harvesting subcontractors working with Southwest Forest Industries then. The Ribelins were the only ones to stick around. They understood the economics and did the work efficiently. They had good equipment. They also built a lot of roads and would do extra work on roads, which saved them on not tearing up their logging trucks. They were never one to shortcut anything, they just wanted to do an excellent job. They’d do it the right way, they did everything well and they made money doing it.”

“Ken has a salt-of-the-earth character and Ribelin had a huge impact on Northern Arizona,” said Vastco Owner Ed Van Beek, a former member of the Forest Service road crew and wildland firefighter who has a long history with Ken that started in 1982. “What a wonderful land stewardship example they set in logging, and maintaining and developing bridges and culverts.”

The two businesses, Vastco, a traffic interchange and bridge building company, and Ribelin, worked together on the Interstate 40/Interstate 17 interchange in the early 2000s. “The Ribelin family was a big part of that project. They were very conscientious about tree removal and fitting the valuable trees and overall environment into the project so we could overlay the interchange in the ponderosa pine forest. We cut some trees and were able to mill them into benches along the urban trail [FUTS]. It was a wonderful example of taking a transportation development project and giving back while being conscientious, quick, clean and efficient. The Ribelins are outstanding people and the impact on the community has been nothing but positive in a very traditional industry.”

“I spent time with Kenny looking at his operations and talking with him about forest restoration treatments with minimal damage to the soil, maximum benefit to the residual stand. When he left a site, it was in good condition and on a good path for forest health,” said Covington, retired founder of the Ecological Restoration Institute at Northern Arizona University and Emeritus Regents’ Professor of Forestry.

Southwest Forest Industries was acquired by Stone Container Corp. in 1987, which closed the Flagstaff mill in 1998. “We’ve been existing without any mill since then by taking wood wherever we could sell it. It’s a downing task. There’s just no market for it. We’ve been a pretty small company for the last 20 years with the industry going away,” said Ken.

Since the mid ’90s, Ribelin has been the main operator clearing land for subdivisions and golf courses in Flagstaff. In 2009, Ribelin Logging’s parent company, High Desert Investment Co., opened a firewood plant in Winslow. High Desert Forest Products operated from the former Coca-Cola facility there. “We worked about 30 people out of that plan to get rid of the small wood off our jobs and ran it for about 10 years,” he said.

Ribelin had planned to be part of the forest thinning solution through 4FRI, delivering logs from small diameter trees to an Oriented Strand Board plan planned for Winslow. The OSB operation never happened and Ribelin didn’t win the Forest Service bid for the 10-year thinning contract. The company’s last contract on the Coconino National Forest was at Chimney Springs working with The Nature Conservancy (TNC) in 2017.

“They were the best loggers I ever worked with,” said Flagstaff Fire Department Forest Health Supervisor Neil Chapman, who was the TNC forest program manager at the time. “Their commitment to excellence showed in how they would implement projects and close out projects. I learned so much from them. Ken and the crew were just fantastic. They really paid attention to the right trees to remove and the right trees to leave in the woods. They did a wonderful job with the way the site looked when they were wrapping up and with rehabilitating roads.”

A Change on the Landscape

Ribelin had become frustrated with a lack of Forest Service timber sales in recent decades and the number of appeals filed on those that have been offered for bid. Those in the industry say the business has become more difficult since its heyday in Flagstaff in the ’70s and ’80s. The cost of doing business has increased while the labor force has decreased. “Finding people who can do the work in this backbreaking industry is tough, and contracts are getting more complicated and difficult to administer,” said Van Beek.

“When we started in Arizona, our contract with the Forest Service that spells out all the conditions of the sale was a quarter-of-an-inch thick. Now, they are two-and-a-half inches thick and there is nothing in there that makes it better for the logger,” said Ken.

At 70 years old this month, Ribelin is disappointed about the jobs that don’t exist now and the family business that won’t be handed down to the next generation. “It’s pretty sad when it could have been a really thriving industry.”

He is also concerned about devastating wildfires that he says will keep threatening Flagstaff and other communities. “That whole area where the Tunnel Fire burned, that was marked to be logged. Too many people don’t understand the need to thin the woods. The small trees are choking out of the forest. I’m not sure I can stand to watch what little is being done here.”

Of the Ribelin family involved in the business, company Chairman George Ribelin is 94. He and his wife, Vice President Joann, live in Cottonwood. Ken’s brother, Allen, is chief financial officer, living in Queen Creek. Little sister Joni Boardman, a former director, is in Clarkdale. Cousin Tim, a foreman, lives in Camp Verde. George’s brother Larry is in Flagstaff. His brother, Butch, died in 2020.

“We are losing generations of experience and loggers who do such high quality and important work protecting our communities and our watersheds,” said Chapman.

“This marks a sea change on the landscape,” said Van Beek. “There was so much talent working in the Coconino National Forest in the ’70s and ’80s. The Ribelins affected the whole Forest Service culture. Their work was part of the identity of Flagstaff. It’s bittersweet as we look back in respect for the past and try to understand how we see the future.”

“I hate to see the Ribelins go,” said Covington. “They’ve been important to Flagstaff since the ’70s. I think it’s going to be difficult to find companies willing to take on the risk of bidding on contracts without some kind of guarantee of the work. Still, I’m hopeful that we can restore forest areas to more open conditions and naturally functioning ecosystems. The Tunnel Fire burned very hot and the wind speed was high. I don’t see that changing. There are still tens of thousands of acres left to burn under high severity conditions in Arizona.”

As a logger, Ken was always in the woods, from daylight to nightfall. In retirement, he doesn’t see that changing, except now he’ll be camping and hunting. “That was the most enjoyable part of being a logger, being in the forest.” FBN