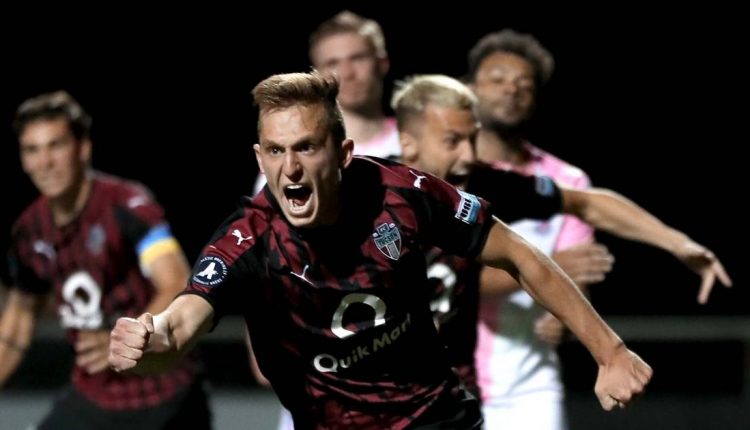 Behind a goal from an unlikely leading scorer, Tucson FC managed to get a point late in their season opener.

In the 81st minute FC Tucson defender Jacob Crull scored on a corner kick in the Men in Black’s home opener on Saturday night to salvage a 1-1 draw with Forward Madison FC.

“I think we got unlucky,” said FC Tucson defender Tyler Allen. “I think we tried to exploit them in the wide spots and we did well but we couldn’t get that finishing goal to put them away.”

FC Tucson midfielder Louis Perez got the assist on the goal.

The goal snapped FC Tucson’s (0-1-1) scoring drought of about 170 minutes to open league play after they dropped their season opener 4-0 at the Richmond Kickers.

In the 63rd minute Forward Madison defender Cyrus Rad got sent off after receiving a second yellow card with the Flamingos trying to protect a 1-0 lead.

“It was a well-fought game, I thought both teams had some good chances, especially obviously with them going down to 10 men,” said FC Tucson’s Charlie Machell. “I felt like we probably could’ve nicked it at the end but probably at the end of the day, a point’s a fair result.”


Forward Madison’s Cyrus Rad, right, chops FC Tucson’s Daniel Bedoya, picking up his second yellow card and the night and an ejection in the second half Saturday.


Forward Madison midfielder Christian Enriquez broke the deadlock with a goal in the 54th minute from about 30 yards out.

Crull’s goal is his second in all competitions this season for the Men in Black. In 2020 and 2021, when he played for Union Omaha, he scored zero goals.

“We were searching for that goal all game and after we got that goal they just packed it in and we were even a man up but we just couldn’t get that another one to finish them off and get the dub,” Allen said. “So we need to do better next time.”

Machell said Crull’s goals have been “massive” for them.

“I think it’s only a matter of time before our strikers start scoring goals as well but it’s so important for all of the team to chip in and Jake’s been massive for us to get those two goals in two games,” Machell said. “He’s a top player, you’ll see him after training every day working on those all the time, so credit to him for getting in those opportunities and putting them away.”

Allen, who played for Forward Madison (0-0-3) last season, was voted “king of the match” by FC Tucson supporters.

“It was good to see old friends but you always play harder against old buddies,” Allen said. “So it was definitely good play against them but I wish we got a better result.”

FC Tucson returns to action Tuesday when it hosts California United Strikers FC in the third round of the Lamar Hunt US Open Cup at 7:30 pm The Men in Black’s next league match is Saturday at the Chattanooga Red Wolves SC (2-0-1 ) at 4:30 pm on ESPN+ and Hulu.