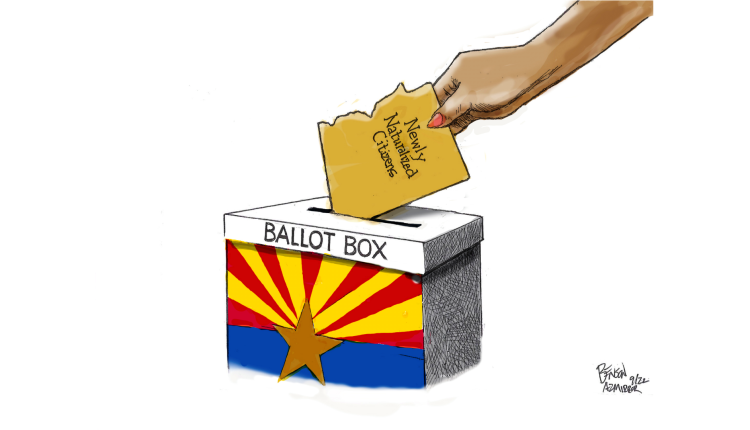 A record number of Latinos participated in the midterms and voter advocacy organizations say that’s just the beginning of the voting bloc’s increasing influence in Arizona.

As many as 400,000 Latinos voted in the November election, according to early voting data analyzed by DJ Quinlan, a partner at Phoenix-based Democratic consulting firm Radar Strategies.

“What’s becoming more and more clear is that 2018 and 2020 Latino turnout was not a blip, and we are going to see continued growth,” he said, during an online news conference Wednesday.

Quinlan expects the share of Latino voters to surpass that of the previous record made in the 2018 midterms, continuing a trend of rising participation rates from the demographic group. In 2018, the group made up 23% of Arizona voters. That share jumped to 30% and was credited with helping to win the state for President Joe Biden in 2020.

The increase in Latino voters is already evident when comparing turnout during this month’s midterm to the August primary election, in which more than 156,000 Latinos voted, Quinlan said.

That upward trend is helped, in part, by the voting bloc’s median age, which skews young. While the majority of the overall electorate in Arizona is white and between 45-64, the average age for Latino voters is concentrated in the mid-twenties.

“Latinos are a young population,” Quinlan said. “That means the vote share is going to continue to grow every single year but it’s going to take continued engagement.”

This year, that engagement effort was undertaken by Latino advocacy and voter participation organizations like Chicanos Por La Causa Action Fund (CPLCA) and Mi Familia Vota. Under the banner of the Latino Loud campaign, a $10 million dollar voter outreach strategy, as many as 36,000 Latinos were added to voter rolls for the first time.

Along with new registrations, the campaign targeted low-propensity voters, defined as Arizonans who’ve skipped out on one or two election cycles. The short-term hope was to encourage a higher turnout in this year’s midterm election than 2018, said CLPCA Executive Director Joseph Garcia, but the fund’s long-term aim is to sustain the voting bloc’s impact over time.

“This campaign was never about the 2022 election, it was not even about the 2024 election. It’s about all elections moving forward,” Garcia said. “We need to build upon the momentum we have going forward and not just start from zero again as we get closer to the next election.”

It’s time for the Latino voting bloc to be acknowledged and courted by politicians, he added, not dismissed or taken for granted and that will only be attained by consistent turnout.

“The goal is: We want to not be the vote that sometimes shows up, but actually the vote that you need to get to be successful — that you can’t win an election without,” Garcia said.

Every vote is critical in a swing state increasingly characterized by tight races, and low turnout could be the difference between a campaign’s failure or success. The Yes on 308 campaign, Garcia pointed out, was one such example. The effort to allow undocumented students in Arizona to pay in-state tuition passed with a difference of less than 60,000 votes.

Latino voters have also emerged as significant contributors to the pushback against the much-touted but unsuccessful red wave, further proof that mobilizing the voting bloc can help sway elections.

Dorian Caal, director of civic engagement research at the Los Angeles-based NALEO educational fund, said the reasons Latino voters were spurred to cast their ballots during the midterms saw a change from previous elections. While inflation was topmost in the minds of Latino voters, reproductive rights moved up to second place, according to polls conducted over a period of nine weeks.

That issue didn’t break the top 10 in the list of concerns in years past, Caal said, but the recent overturning of Roe v. Wade and subsequent state-level movement against abortion access helped to rally Latino voters.

Voter participation from the Latino community in the November midterms is a strong indicator of the group’s staying power in future elections, said political consultant Quinlan.

“This is now the third election in a row — including two midterm elections that young people and Latinos aren’t supposed to participate in, and a pandemic — that the Latino vote has shown up and made a difference in critical races,” he said.