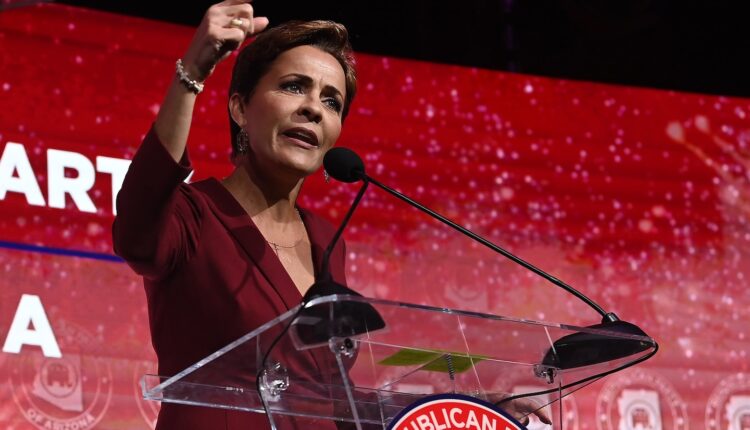 Hours before Kari Lake was projected to lose her race for Arizona governor, attorneys for her campaign and for the Republican National Committee spoke by phone Monday to a lawyer for Maricopa County, home to Phoenix and more than half the state’s voters.

The Lake representatives posed a series of questions about voting problems on Election Day, nearly a week earlier. Then, toward the end of the phone call, an attorney for the RNC stressed the importance of rapid answers, according to the Maricopa attorney, Tom Liddy, a lifelong Republican who heads the county’s office for civil litigation.

Liddy recalled that the RNC attorney, whom he and others identified as Benjamin Mehr, told him that there were “a lot of irate people out there” and that the campaign “can’t control them.”

Liddy said in an interview Friday that he considered those words a threat.

On Friday night, a Twitter account associated with Lake’s campaign posted a video of a portion of the call that captures Liddy cursing and raising his voice. The Lake campaign did not respond to a request for the full video, which was taken from inside the GOP’s war room at a Scottsdale resort. County officials said they were blindsided that the conversation had been recorded and then posted publicly with the names of only one side bleeped out.

Tim La Sota, an attorney for the Lake campaign who was present for the call, did not dispute Liddy’s characterization of the conversation but said he did not interpret Mehr’s comments as a threat. An RNC spokesman called Liddy’s account of the call “false” and issued a statement attacking Maricopa County officials as “completely inept.”

The tense exchange, between two Republican lawyers, lays bare the internal GOP war over the administration of elections. Nowhere is that feud more ferocious than in Maricopa County, the second-largest voting jurisdiction in the country, which became a focal point of former President Donald Trump’s efforts to reverse his 2020 loss. Vote counting is still proceeding in the county, and the race for state attorney general, which could shape enforcement of election law, hangs in the balance.

The interaction captured on video reveals how intensifying distrust broke into open hostility in the aftermath of the midterm elections. Lake’s campaign has cited problems with printers that plagued voting across Maricopa County to argue that the results should not be certified and that county officials should be thrown out of their jobs.

Lake has not conceded to Democrat Katie Hobbs, who declared victory shortly after major networks called the race on Monday.

The exasperation evident on the call has continued to define Lake’s public comments in the days since, while her campaign’s legal strategy remains unclear. People close to her campaign say potential litigation would be aimed not at reversing the results but at narrowing the margin.

Lake has not called for protests, as Trump did following his loss, but her team has shared memes about Hobbs that portrays the Democrat as a dog and call her “unfit” and “downright shady.”

The video clip circulated by the Lake campaign shows the RNC attorney, seated in front of a computer, holding a phone in his hand, with another person on the other side of him also holding up a phone as if to record the episode. In the clip, the RNC attorney says it would be helpful “for us to be able to say that Tom Liddy is giving us good information.”

“Guess what? Let me educate you,” Liddy replied, according to the video recording. “I cannot control what you say. OK? You can say whatever you want to say. I can’t control that. Now, if you’re not happy working with me…then we’ll just stop. I don’t give a s—.”

At one point, Liddy said: “It sounds like you’re threatening me.” More responded: “I’m definitely not threatening you, and I promise that.”

Liddy repeated the RNC attorney’s words back to him, as he recalled them. “If I don’t get these answers to you quickly, you’re not going to be able to tell the crazy people that I’ve been helpful,” Liddy said, according to the video recording. “I don’t give a f—.”

“I’m just saying what I’m worried about,” Mehr responded, to which Liddy told him, “I don’t care.”

Inside Kari Lake’s war room, where Republicans are grappling with defeat

La Sota, the Lake campaign attorney, told The Washington Post the call was one of many conducted with the county about “garden-variety” issues with ballots. Questions raised early in the call focused on the nature of outstanding ballots and the number of people who failed to properly check out of a voting center after encountering mechanical problems, potentially preventing them from casting a ballot elsewhere.

La Sota noted that the county attorney was in the middle of a stressful situation but said he thought Liddy overreacted. Liddy, a lifelong Republican, is the son of G. Gordon Liddy, the lawyer who devised the botched burglary that led to the Watergate scandal and the resignation of President Richard M. Nixon. He served as deputy counsel for the RNC during the 1990s.

Liddy told The Post he reported the exchange to his boss, County Attorney Rachel Mitchell, as well as to Sheriff Paul Penzone (D) and Bill Gates, the Republican chairman of the county’s governing board.

Lake’s campaign has been excoriating Maricopa County for problems with printers at 70 voting sites. The problems, which involved ink that was too light for ballots to be read, required some people to wait in long lines, travel elsewhere to vote or deposit their ballots in secure boxes that were transferred downtown and counted there. The county has yet to determine the cause of the printer problems.

Arizona precincts with voting problems were not overwhelmingly Republican

On Thursday, Lake told her followers on social media, “Arizona, we are still in this fight.” She traveled that day to Trump’s Mar-a-Lago Club in Florida, where she received a standing ovation at a luncheon hosted by the America First Policy Institute, a think tank founded last year by Trump allies and former members of his administration, according to a person who was there. That evening, she addressed a crowd at the club and claimed, falsely, according to a video circulated on social media, that officials “shut down the machines on Election Day.”

The county, for its part, has blamed Republican leaders in the state for spreading misinformation about early voting and making baseless claims of malfeasance. In the days surrounding the Nov. 8 election, the Maricopa County Sheriff’s Office relocated Gates to an undisclosed location because of threats, Gates confirmed Friday to The Post.

The county attorney’s office represents the two entities responsible for elections: the board of supervisors and the county recorder. After the 2020 race, Liddy played a leading role in advising county officials as Trump and his allies sought to delay and reverse certification of the results, and to undermine confidence in the results through a partisan ballot review that culminated in an investigation into county officials by Arizona’s Republican attorney general, Mark Brnovich.

Liddy told The Post that he reacted to the RNC attorney’s comments in the context of threats buffeting county officials and others who defended the legitimacy of the 2020 election. Among those targeted was Rusty Bowers, the Republican speaker of the Arizona House of Representatives, who resisted a pressure campaign to undo Trump’s loss in the state and faced protests outside his home as a result, including as his 42-year-old daughter was dying at his home in January 2021.

“This is in the context of us having people in the streets all throughout 2020; of people going out to the streets in front of Rusty Bowers’s home while his daughter was dying; of hundreds, if not thousands, of threats of death or imprisonment that have been sent to my clients who are officers or employees of Maricopa County, of threats of death to me and to my son,” Liddy said.

Liddy said that the questions posed by Lake’s campaign were routine and that he worked to answer them promptly.

“What I found shocking,” he added, “is that a member of the bar would threaten another lawyer.”

On Nov. 10, two days after the election, a Phoenix-based attorney representing the RNC wrote to the county’s director of elections to ask that his department “remain running 24 hours a day” to process ballots and release results, according to emails obtained by The Post. A county leader replied that the elections department was already “operating at peak capacity.” Election officials had previously emphasized that counting could take as many as 12 days.

This past week, Lake issued a series of video testimonials on Twitter from voters who claim to have been denied a chance to cast their ballots. The voters described encountering mechanical glitches or other barriers they described as discouraging, though some concluded their direct-to-camera remarks by saying they did ultimately cast a ballot.

La Sota, the Lake campaign attorney, has also requested wide-ranging communications and other documents from the county, according to a copy of the request obtained by The Post. Addressed to Liddy, the request seeks all communications before Election Day among county officials and agents “with regard to problems with tabulation or printing of ballots at voting centers.”

La Sota wrote that none of the voter centers open for early voting on Oct. 12 encountered tabulation problems, which he argued “would not make any logical sense.” A county spokeswoman confirmed that printer problems only surfaced on Election Day. But early ballots were all tabulated downtown, the same place where ballots with ink that was too light were sent for counting.

From Her View in Knoxville, the Health System Is ‘Not Designed for Poor People’

No smoking gun in first day of Lake election trial