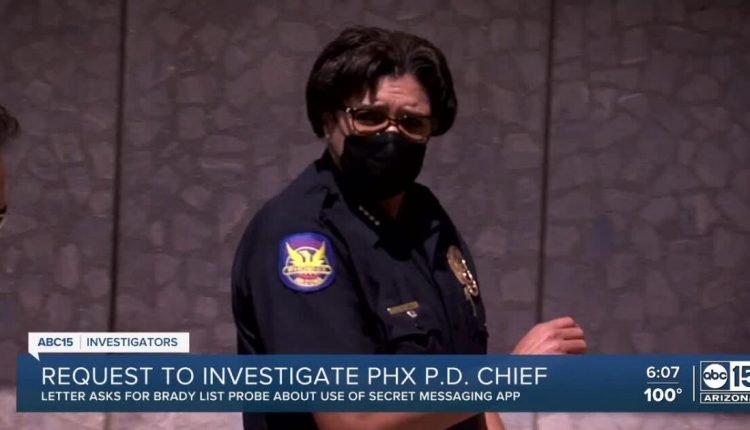 PHOENIX — A government transparency watchdog group is asking for a new integrity investigation of Phoenix Police Chief Jeri Williams and her use of a secret messaging app called Signal.

Last week, ABC15 Investigator Dave Biscobing exposed concerns that Chief Williams and other top police officials had accounts on the app, which encrypts messages and can automatically delete them, to discuss government business.

A letter sent from a lawyer for three assistant police chiefs to Phoenix’s city manager included screenshots from a “just the top” messaging group which indicated Williams may have used the app as recently as 2021.

A police spokesperson previously told ABC15 “Chief Williams asked that Signal not be used by her executive team for work-related issues and deleted her app from her phone in 2020.”

Judicial Watch sent a letter to the Maricopa County Attorney’s Office Sunday, saying Williams’ alleged conduct undermined public trust in law enforcement and claiming she tried to hide the truth from the public.

“Public officials have to comply with public records law,” said Mark Spencer, the Southwest Projects Coordinator for Judicial Watch. “This runs afoul of what’s called a destruction of evidence that could be a public records law violation, or even tampering with evidence.”

The letter asked for a review of Williams and any other Phoenix police managers who used Signal. “Maricopa County attorneys can evaluate what’s going on with the management misconduct and the allegations and whether they deem it is appropriate to put them on the Brady list, a Rule 15 issue,” said Spencer, who is also a former Phoenix police union leader.

Williams is just weeks away from retirement, and her department is currently under a Department of Justice civil rights investigation.

Brady lists are kept by prosecutors to track officers with a history of dishonesty, criminal activity, and other integrity concerns. Brady list information can be used to challenge an officer’s credibility on the witness stand. Even after retirement, Williams could be called to testify in court cases related to her role as police chief.

“The Phoenix Law Enforcement Association is aware of the allegations against Phoenix Police Chief Jeri Williams regarding the use of the encrypted messaging platform Signal for communication with her Executive staff and the inaccurate statement from the department about the Chief deleting the app in 2020. We believe all police officers, regardless of rank, should be held to the same standard of conduct, especially when it involves providing accurate information to the public. Our priority is preserving the integrity of the Phoenix Police Department therefore leadership must be transparent and truthful when questioned about serious allegations.”

A spokesperson for the Maricopa County Attorney’s Office would not comment on the allegations against Williams but did confirm Judicial Watch’s letter was received and it’s under review.

ABC15 also reached out to the Phoenix City Manager’s Office with several questions including whether Williams was investigating internally for alleged violations of public records rules and who else used signal or similar secret messaging apps to communicate.

In response to ABC15’s questions, a city spokesperson emailed the following statement:

“Technological changes have influenced the way people communicate in modern society. Those changes often outpace policies and procedures regulating their use. The City is committed to an evaluation of our policies and training to ensure employee adherence to all applicable public records.”