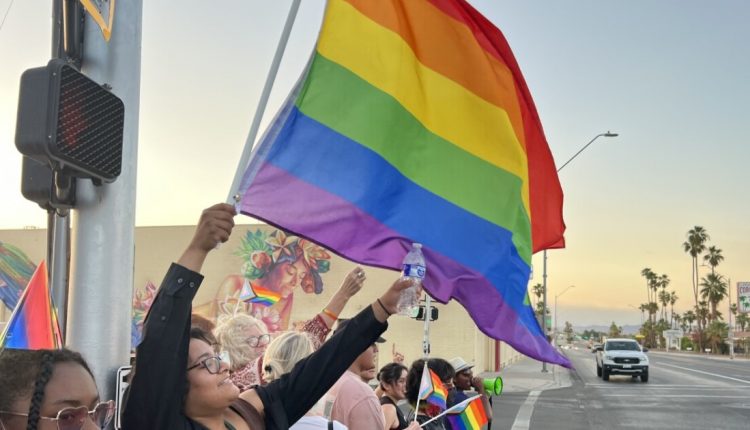 Yuma Pride returned Friday night after a hiatus due, in part, to the pandemic. Organizers say it was designed as a demonstration of the strength of the local Lesbian, Gay, Bisexual, Transgender and Queer+ community.

Peyton Ortiz said she organized the march as one way to celebrate Pride in Yuma.

“It’s important to the LGBT community because they’re able to see they’re not alone,” Ortiz told KAWC. “It’s also important for all of Yuma to see we’re here, we’re proud and we’re united. ”

“(The march) shows a lot of love and support,” said Jimenez, who is bisexual. “Nor just for bi or gay (people) but it’s for people who have their family here with us.”

Kayla Dunston and Aquila Taylor said they recently relocated from the East Coast.

“This means there are people here like my wife and I,” said Taylor, who was a shirt with a rainbow that said But First Equality. “It’s nice to know we have a community here. They’re laying the groundwork of how to treat people, not just gay people, but everyone.”

Other Pride activities in Yuma this month included Pride brunches. There will be a Pride rave on June 24.