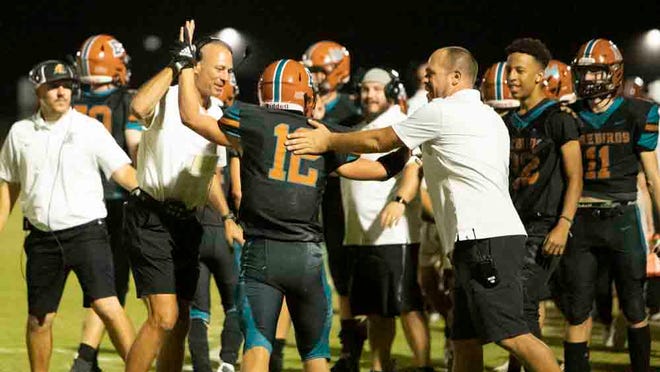 No. 2-ranked Peoria Liberty shut out Glendale Mountain Ridge 42-0 Friday night but it was all defense to start the game after each team could not maneuver a first down.

The Lions offense started to click early in the second quarter, as they scored first and didn’t look back after that. The Liberty defense was stout, giving up minimal yards all night and forcing seven three and outs to win handily.

The Liberty defense blocked a punt, and the offense scored five plays later on a 4-yard touchdown run by Bruzon.

Anderson opened up the third quarter with a 79-yard catch to the 1-yard line. Zach Wallace then ran it in for the touchdown.

Anderson finished the game with one touchdown and 147 receiving yards for Liberty, which is ranked No. 2 in The Republic’s Open and 6A rankings and the AIA 6A rankings (Chandler is No. 1).

Bruzon ran for one touchdown and threw two touchdowns, while throwing for over 250 yards.

“Our defense is tremendous,” said Colin Thomas head coach of Peoria Liberty. “So many guys make plays for us. That’s a good offense, good quarterback, good receiver, so I was very proud of their effort.”

“We just had to get organized on a few things that was causing us some trouble,” said Thomas. “In the second half we were able to run the ball effectively and make some big plays.”

Peoria Liberty moves to 7-0, 1-0 and will host Sandra Day O’Connor next weekend, while Glendale Mountain Ridge fall to 4-3, 1-1 and will play at Centennial next week.

On Friday night, senior quarterback Richard Stallworth had an opportunity to set the all-time passing yards record for Arizona high school football and help push his Yuma Catholic team to 6-1 in its first season of 4A Conference football.

The latter he was able to do, but the record will have to wait for another night as Yuma Catholic held off a late rally from Glendale (2-5) to win on the road, 35-20.

Stallworth and his cousin, senior Jace Seale-Brown, were on point Friday night as the pair connected on four of Yuma Catholic’s five touchdowns. The two put their team on the board first when Stallworth found Seale-Brown in the corner of the end zone on the opening drive of the game. This was Stallworth’s first of two touchdown passes to Seale-Brown in the first quarter.

Stallworth connected with Seale-Brown with 4:20 left before halftime to give their team a 21-0 advantage, while the two put the game on ice for Yuma Catholic on a 39-yard pass that proved to be the final score of the night .

Glendale’s junior quarterback, Zechariah Owens, tried to single-handedly keep his team in the Friday night game with both his arm and his legs. He put Glendale on the board with 8:19 left in the third quarter with an eight-yard run into the end zone. Following a drive he engineered down the field, Owens again found the goal line, this time on a 38-yard run that cut Yuma Catholic’s lead to eight and gave the visitors a scare with just 4:30 to play in the fourth quarter.

Highlights of the game

Following Owens’ touchdown that cut Glendale’s deficit to 28-20, the hosts were unable to convert the extra point that would’ve cut its deficit to seven. With an already large hill to climb, Glendale was unable to stop Yuma Catholic on their following drive and Stallworth’s fourth touchdown pass to Seale-Brown gave their team a 15-point lead and delivered the knockout punch to Glendale.

Quote of the game

“Right now it’s all business. We’ve just got so many bigger things to do right now and, you know, Lord willing, that will come, but at this point we’ve got to take care of business, get our wins, and get a good seed in the playoffs” – Yuma Catholic head coach Rhett Stallworth on how much of a focus his son Richard Stallworth’s passing yards record has been on both his quarterback and the team

Eastmark continued his winning ways with a 56-6 win over Coolidge Friday night. The win came on the team’s senior night which included a pregame ceremony, fireworks and a stadium-wide sing-along to Sweet Caroline.

On the field, the Firebirds outmatched Coolidge in every aspect of the game. Eastmark scored a touchdown on each of its first seven drives.

The offense was led by senior running back Diego Rodriguez who started the scoring with an eight-yard touchdown run. Rodriguez wasn’t done scoring, however. As the first quarterer was coming to an end, the running back scored his second touchdown of the game extending Eastmark’s lead to 28.

Rodriguez would finish the game with 77 yards and two touchdowns on the ground.

Other seniors on Eastmark also made an impact with their legs on offense.

A week after throwing for over 200 yards and three touchdowns, senior quarterback Mack Molander scrambled for two touchdowns of his own.

Despite having the smallest role of players who ran the ball, junior running back Coleman Samples tackled on a touchdown of his own in the first half to get the Firebirds up 35-0. On his four rushes, Samples averaged 14.25 yards per carry.

After having an explosive game last week, Eastmark’s star wide receiver Austin Johnston was only held to two catches for 59 yards, but he was able to reel in a 16-yard touchdown to open the second half.

Senior tight end Wyatt Mullenaux was the featured receiver for Eastmark. Mullenaux scored a touchdown on both catches he made.

Eastmark replaced its starters after one drive in the second half and were unable to generate much offense after that.

On the Coolidge side, junior wide receiver Wanya Brookshire made a highlight reel catch along the sideline to put his team on the board. Other than that, one play, Coolidge was unable to generate any offense.

On the defensive side of the ball, Eastmark controlled the turnover game. Early in the second quarter, the Firebirds recovered two fumbles on back-to-back defensive plays. Both turnovers directly led to touchdowns form the offense.

Senior defensive lineman, Preston Bradford forced one of the fumbles as well as sacking the quarterback twice throughout the game.

Eastmark was also able to pick off Coolidge once on a highlight play from senior safety Kaiden McCarty.

Eastmark head coach Scooter Molander was emotional as he spoke about the importance of his team’s seniors on their senior night.

Both teams will finish the regular season next week as Eastark will travel to Wickenburg for a matchup against the Wranglers. Coolidge will end its season with a road game against ALA-Ironwood.

Marcos De Niza (No. 1 Republic 4A rankings) came into Friday’s game undefeated, winning all of their games by at least 14 points. So, how would the Padres handle it when adversity came their way? This game gave them an opportunity to answer that question, and they did, rallying for a 35-28 victory on a game-winning pick 6.

To start the game both defenses showed why they are highly regarded as we had a scoreless first quarter. Now there was a touchdown called back for combs that should have been counted.

The second quarter started out with a bang as Brasen Leon threw a touchdown pass to Clinton Hopkins to get Marcos on the board, Leon and Hopkins linked up multiple times on that drive. The seven point lead didn’t last long as Combs came back with a long touchdown pass of their own in response. The score was knotted at seven going into halftime.

Combs started the second half well, going on a 14-0 scoring run to take a 21-7 lead into the fourth quarter, but it as followed by an unsuccessful onside kick. Marcos took advantage of this by scoring to start the fourth quarter. The Padres quickly got the dball back and score again to tie the game at 21 with less than six minutes left.

Combs resolved with an 80-yard touchdown pass to take a 28-21 lead. Marcos showing grit and determination would come back to score and tie the game at 28 on a drive that included a 4th and 10. Combs now had three minutes left in the game to drive down and win.

Combs was driving down the field and a win on the road seemed to be in their future when Marcos intercepted a pass and ran it back for a touchdown and the winning score.

Each team will be on the road next Friday: Marcos goes to Poston Butte and Combs visits Seton Catholic.﻿

Red Mountain overcame a slow start offensively and a frightening injury delay. Friday night. But a stout defense held things down before the offense got into high gear, as Red Mountain took care of visiting Queen Creek 24-6 in a 6A East Valley region battle.

The game was delayed for nearly a half hour during the second quarter when receiver Gunner Moore went down with what was feared to be a neck and head injury. Moore was taken away by Ambulance, but is expected to be ok.

Red Mountain (5-2, 2-0) puts itself in good position for the post-season and potential region title.

Queen Creek (3-4, 0-1) qualified for the open division playoffs a year ago, now finds itself scrambling to secure a 6A playoff berth.

Red Mountain quarterback Carter Crispin played razor sharp, throwing for 191 yards and three touchdowns. Senior Ja’Kobi Lane was again Crispin’s top target, as the 6-5 Lane used his size and athleticism to help carve up Queen Creek’s secondary most of the game, finishing with seven receptions for 112 yards and one touchdown.

On the first play of the second quarter, Lane avoided double coverage by going up high in the back of the end zone to pull down a 15 yard strike from Crispin.

Lenox Lawson and Bode Wagner each caught touchdowns in the second half.

Red Mountain’s defense made near goal line stand at the end of the first half that permanently swayed the game’s momentum.

Trailing 7-0, Queen Creek reached the Red Mountain two yard line with under two minutes until the half. A pair of rushing attempts were squashed before a crucial false start penalty put Queen Creek back to the eight yard line. On fourth down, Queen Creek

Quote of the Game

“We started out a little slow, but we started clicking offensively after the second quarter. And having Ja’Kobi (Lane) always makes a big difference. He can make so many plays and opens up our offense. Our defense was awesome all night. That stop before halftime really fired everyone up.” —Red Mountain quarterback Carter Crispin.