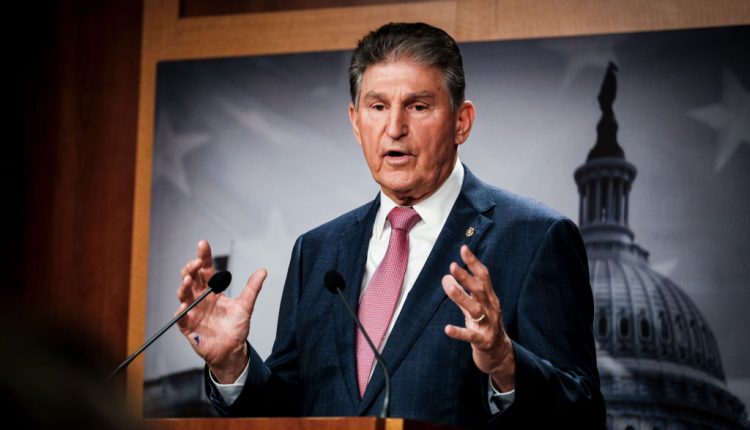 Among the items on Congress’ lengthy to-do list by the end of the year is U.S. Sen. Joe Manchin’s proposal to speed up the federal government’s permitting process that certifies energy projects do not harm the environment.

But the bill, which was a condition of the centrist West Virginia Democrat’s support for his party’s larger climate, health care and taxes measure earlier this year, may still not have the support it needs to pass, with progressive Democrats concerned about the effects on environmental protections.

Failing to pass a bill this year would be a disappointment to Manchin and his allies in the oil, gas and coal sectors, who have pushed for years to loosen federal permitting requirements. Some renewable energy advocates also say that federal permitting must be reformed for wind and solar technology to reach their highest potential.

But it would be welcome news for environmental advocates, who say the bill would weaken a fundamental environmental law that protects communities from pollution, while providing little in the way of new renewable energy capacity.

Congress is expected to be in session through much of December, before adjourning for a new session in January and a split government as Republicans take over the House with a slim majority.

“It’s a pretty tight calendar, and they have a lot they have to do,” said Brett Hartl, the government affairs director for the environmental group Center for Biological Diversity, which opposes the Manchin bill, speaking of the lame-duck session of Congress.

“So do you spend a lot of time on a piece of legislation that is very deeply divisive?”

Environmental groups, including those in the environmental justice movement that seeks to project marginalized communities from exposure to pollution, have opposed the bill from the start.

The measure would put time limits on environmental reviews and restrict communities’ power to challenge agency decisions in court.

The letter was distributed Monday by U.S. Rep. Raul Grijalva, a progressive Arizona Democrat who chairs the House Natural Resources Committee and has vocally opposed the Manchin bill.

Those time limits don’t actually weaken the requirements of the law, but an artificial timeline without additional resources to complete reviews could lead to agencies cutting corners, said Aaron Weiss, the deputy director of the conservation group Center for Western Priorities.

“And when agencies cut corners on NEPA reviews, that’s how they get tied up in court for years,” Weiss said. “So the irony of at least the last Manchin proposal that we saw is it didn’t seem like it would actually do much to streamline NEPA reviews and, if anything, that it could backfire.”

A major sticking point in the Manchin bill is its provision approving the Mountain Valley Pipeline, a natural gas pipeline in Virginia and West Virginia.

U.S. Sen. Tim Kaine, a Virginia Democrat, said earlier this year that he opposed the bill because of that section. The pipeline should go through standard environmental reviews, he said.

The permitting bill was part of a deal Senate Majority Leader Chuck Schumer made with Manchin to secure his support for Democrats’ major climate, health care and taxes bill, which provided $370 billion in clean energy spending.

Schumer said at the time he didn’t love the idea of weakening environmental statutes, but it was a necessary concession to Manchin to pass the larger bill. He also said that reforms could speed clean energy projects.

“In terms of the permitting reform, I didn’t like it, but it was something that Sen. Manchin wanted,” he said in a press conference immediately following Senate passage of the Inflation Reduction Act in August. “We modified it some and, in fact, it has some very good things for the environment. It’s going to make permitting easier for clean energy.”

But that argument hasn’t caught on completely, as environmental advocates oppose trading away longstanding federal protections for permitting changes that would help both clean energy and fossil fuel production.

“It is pretty naïve to think that if we gut NEPA that the bigger winner would somehow be renewable energy,” said Hartl of the Center for Biological Diversity.

“I think (renewable energy) transmission is important,” said Lisa Frank, the executive director of the Washington office of the environmental group Environment America. “But we don’t see it as this do-or-die moment that we have to pass something by December or a clean energy future is wrecked.”

Prospects yet this year

There are indications Manchin and Schumer are continuing to work to appease the bill’s opponents and pass it this year, likely as an attachment to either a government funding bill or the annual defense authorization.

The White House is supportive. Press secretary Karine Jean-Pierre said during the Nov. 10 White House daily briefing that the defense bill should include Manchin’s permitting proposal.

But the permitting bill remains without critical support in Washington.

“As you saw when we tried it last time, there weren’t enough Republican votes,” Schumer told reporters Tuesday. “I’m working with Sen. Manchin to see what we can get done.”

Despite Schumer’s blessing, rank-and-file Democrats, especially on the House side, have largely not endorsed it.

Progressives have well-documented concerns about the bill. Neither progressives nor Republicans have given any indication that they are changing their positions. Grijalva, in the  Monday letter, reaffirmed his opposition.

Republicans, in theory, should favor a proposal to streamline federal permits. Some Republicans have railed for years at the red tape that slows down and increases the cost of infrastructure building.

A more conclusive victory for Republicans in the midterms may have brought Democrats and environmental groups back to the negotiating table this year, to try and hash out a deal — especially on clean-energy transmission — before the less environmentally conscious GOP takes over in January, Hartl said.

But with a slim, single-digit majority in the House, Republican Leader and the presumptive next House Speaker Kevin McCarthy may be unable to corral votes on a permitting bill and progressives appear more willing to take their chances.

“The odds of Republican dysfunction and inability to function are extremely high in the next Congress,” Hartl said.

Still, Manchin and Schumer have pulled off surprises before. Most recently, Manchin insisted this summer he was still working on a climate bill that he could support, even as his colleagues in Congress and many other observers blamed his ambivalence for tanking the chances of any legislation to address climate.

He and Schumer emerged within weeks with a deal for a major bill.

An individual close to Manchin said in late November that the senator “continues to look for ways to pass it by the end of the year.”

But given the packed agenda — funding the government, authorizing annual military spending, perhaps raising the debt ceiling, and passing a bill to clarify how the Electoral College works — Democrats may prefer to stick to items they agree on, Hartl said.