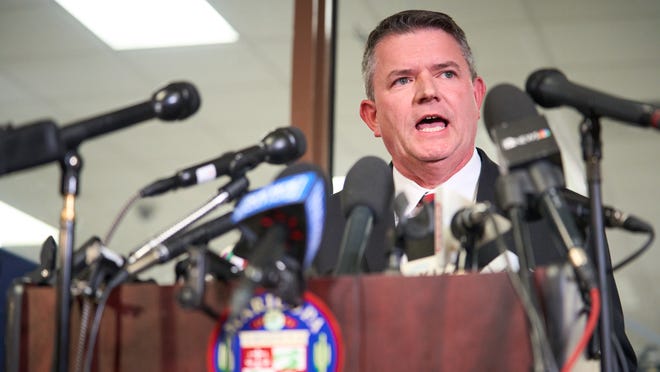 Live updates across the state

We’re still counting, Arizona. More than 500,000 ballots have yet to be tallied statewide.

In Maricopa County, election officials were working 14 to 18 hours a day to process results of Tuesday’s election. They will keep at it through Veterans Day, Saturday and Sunday to verify and count a record number of ballots dropped off at the county’s vote centers Tuesday.

The county will release an updated results count Friday evening.

What to know: Arizona’s highest-profile races still up for grabs

11:40 am: Deasy concedes to Daggett in Flagstaff mayor’s race

Flagstaff Mayor Paul Deasy conceded to challenger Becky Daggett on Friday in the city’s race for mayor in the midterm election.

Fewer than 4,000 votes separated the two candidates as of Friday morning, and Coconino County still has about 12,000 votes left to count, according to the Secretary of State’s office.

Depending on how the votes land, the race could still change significantly. But Deasy, a statistician by trade, doesn’t think a 20-point swing is realistic considering how the votes have gone so far this week.

“Congratulations to the incoming Flagstaff City Council. It’s been an honor being Mayor this last term,” he wrote in a Twitter post on Friday morning. “I look forward to serving our community in other ways and spending more time with my children.”

Looking back on his two-year term, Deasy said he is most proud of securing unexpected funding for the city’s stormwater infrastructure and implementing the CARE Team, which manages 911 calls related to mental health and substance abuse without the need for a police presence.

As of Friday morning, there were an estimated 518,034 election ballots still to be counted in Arizona, the Secretary of State’s Office said.

Ballot counting was expected to extend through the weekend.

10:30 am: O’Halleran concedes the Congressional District 2 race to Crane

“I want to thank the hardworking Arizonans that made calls, knocked doors, and engaged voters – especially the unparalleled staff on Team O’Halleran,” he said in a statement.

O’Halleran was seeking his fourth term in Congress after redistricting and ran to represent an area that is much more Republican than his current 1st Congressional District.

“There’s no denying that my team and I are incredibly disappointed in these results, but I thank the families of Arizona’s First District for giving me the opportunity to serve you these last six years,” he said.

“I thank my opponent for a well-fought and challenging race and wish him all the best in his service to Arizona’s Second District.”

One major race was decided Thursday: Republican Eli Crane defeated three-term incumbent Rep. Tom O’Halleran in the 2nd Congressional District, which sprawls across much of northern and eastern Arizona.

Crane, a businessman and former Navy SEAL, says on his website that combating voting fraud and illegal immigration are major priorities. He is endorsed by former President Donald Trump and supports the Trump-style Make America Great Again, or MAGA, platform.