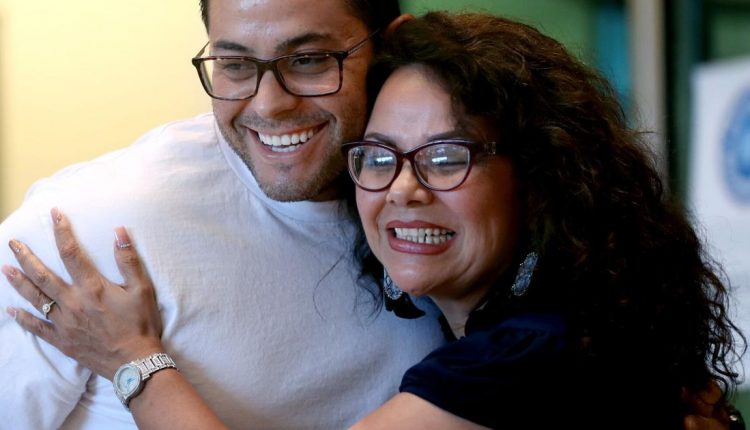 On a Friday in June 2015, Blake Guererro officially ran out of luck.

Guerrero had started using drugs a few years before and ended up with a handful of offenses on his record while trying to support his habit. He first went to federal prison in 2010 at the age of 20, and that’s when he says the cycle began. He’d get arrested, serve his time, get released and start using again.

Unbeknownst to him, the car he’d stolen on that June day belonged to a probation officer. Guerrero fled from police, bypassing two spike strips, before running out of gas on a reservation in Pinal County.

This time, he ended up serving a little more than two years in prison after being convicted of fleeing from law enforcement. Following his release, Guerrero moved to Tucson and spent nearly four years on probation, overseen by Pima County Adult Probation Services.

Guerrero changed his luck while on probation, as an exemplary participant in the program. Last month, he was one of eight people honored for his persistence during a ceremony that featured officials from Pima County’s justice system and former NFL player and University of Arizona alum Vance Johnson.

With between 7,000 and 8,000 people under supervision of Pima County Adult Probation Services each year, the department’s “Journey to Success” event was created several years ago to bring attention to the program’s most successful participants.

Honorees are nominated by their probation officers, each of whom carry a caseload of 60 to 65 cases.

In its third year, Journey to Success has seen 32 people honored. Only one was later charged with a subsequent crime.

Of the 3,471 people who completed probation in Pima County in the 2018 fiscal year, 579 reoffended sometime between 2018 and 2021, according to data from the Arizona Judicial Branch.

That’s a nearly 17% recidivism rate, higher than the statewide average of 13%.

Sanders said the Journey to Success event is the only one of its kind in the state and he’s aware of only one similar program in the country, in Marin County, California.

Honorees receive a certificate and their photos and stories are posted in the lobby of one of the four offices of Pima County Adult Probation Services.

One of this year’s honorees told his probation officer after seeing the wall of photos that his goal was to make it up there himself. While he missed the ceremony, his photo and story were already hanging on the wall among those of the other honorees.

In 2021, 84% of people who exited probation in Pima County completed their terms successfully, said Cara Singer, the probation department’s division director of field services and the creator of Journey to Success.

Sanders called success a relative term, saying that in his business, success is defined as someone who leaves the program without going to jail or prison.

Sanders said within the 85% of successful probationers, there are some people who do amazingly well, to the point that their probation officers couldn’t help but take notice — and action, by nominating them for the award.

Pima County Superior Court Presiding Judge Jeffrey Bergin called the event one of his favorites of the year, saying that judges on the criminal bench spend most of their time talking to people who have found themselves in trouble.

“With fingers crossed, we hope that the program that’s been put together is going to show people how to get back on the right track, how to be happy again, how to be productive in our society, but rarely do we get to know the end of the story,” Bergin said. “They leave our courtroom, and that’s the last we hear.”

Journey to Success allows Bergin the opportunity to learn the outcomes of some of the hardest cases, he said, adding that some of the honorees have overcome insurmountable odds. Including Guerrero.

Hope for the future – and others

Guerrero said he had no idea when he was arrested that Friday in June that it was going to save his life. He said he got sober in prison and met God.

When he got out, he spent two years under federal probation and four years under state supervision, which he said was less than ideal.

“It was kind of rough. I got different probation officers checking on me, trying to see where I’m at,” Guerrero said.

“She always worried about me. Every time I told her I was graduating or I was meeting with a staff member or I was getting privileges, she was always nervous,” he said. “Kind of like, ‘This is make or break. This is where you make it or you fail.'”

He said she kept him in line over the years, watching over Guerrero as he got involved with and eventually started working at Teen Challenge of Arizona, a Christian-based nonprofit that helps people address life-controlling problems in order to become productive members of society .

Guerrero said the support of Esquivel, his mother and his family helped carry him through his years of probation.

“I began to find that there was hope and there was a chance to change. I didn’t have to be this number, this criminal, what my dad was. I could actually be successful and healthy,” he said.

“When these people began to love on me and look past these walls, it just reminded me that I was more than just a drug addict.”

Guerrero said after the event that while he still hath a long journey ahead of him, he’s proud of how far he’s come.

“Knowing that I completed this gives me hope that I can do the next journey and get through the next task,” he said. “Because this was huge.”

Guerrero, who now helps operate a landscaping company, was surrounded by family and friends at the event as Esquivel presented him with his certificate.

“I love you, but I’m going to delete your number now,” Esquivel told Guerrero with a laugh.