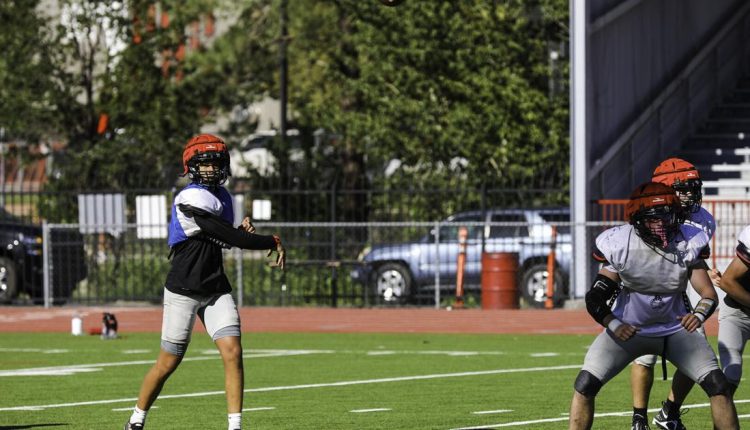 After a bit of a wait, the 4A Conference Coconino Panthers football team will open the regular season on Friday with a home contest against 3A Blue Ridge.

Though the season officially started last week, Coconino was one of just three teams in the conference to have a bye last week — Washington High and Grand Canyon Region rival Bradshaw Mountain also were off to start the season.

Coconino played a scrimmage on Aug. 26 against Snowflake — which coach Mike Lapsley said put a few nerves at rest. The Panthers looked solid at points, including two straight drives ending in long touchdown passes. Being able to hit and execute plays against a quality opponent, regardless of whether it was a regular-season game or not, made a difference.

Still, Lapsley said the Panthers will need to overcome some first-game jitters against the Yellowjackets to start the season 1-0.

“The scrimmage did a lot for us in terms of getting those first plays out and seeing what we’re doing. But I think there’s still going to be mistakes. That’s always the way it goes in the beginning of the season. But hopefully we can minimize those and keep the momentum,” he said.

As part of the 3A, Blue Ridge started the season three weeks ago and has already played in two games. The Yellowjackets hold a record of 1-1, most recently defeating St. Johns, 27-15, on Aug. 26.

The Yellowjackets have a solid defense under coach Jeremy Hathcock, who recently led the 6A Desert Ridge Jaguars to several playoff berths before moving back to his hometown school. Coconino’s offense, led by junior quarterback Enoch Watson, senior running back Cooper French and other potential contributors, will have to execute well from the start to score enough to win on Friday.

They will also have to do so against a Yellowjackets squad with two full weeks of game preparation. Even though the season started three weeks ago for Blue Ridge, it had a bye last Friday. So both teams will come into the game with plenty of time to plan for each other.

“We emphasized all week that they’ve got a bye as well, so we’ve got to be better in our preparation,” Lapsley said. “We told them it comes down to who better executes the game plan after two weeks.”

Kickoff between the Panthers and Yellowjackets is set for Friday at 7 pm at Cromer Stadium.

The Flagstaff Tennis Association is raising funds to send two teams to the 2022 USTA Junior Team Tennis National Championships in Orlando in October.

Northern Arizona’s 14U and 18U teams won the Southwest Sectionals in Albuquerque over the summer, and thus qualified for the national competition next month.

The FTA is set to host a rally-a-thon on Friday from 5 to 7 pm at the Northern Arizona University tennis courts. Similar to a run-a-thon, the goal is to find people to donate a certain amount of money for each ball hit or a flat donation.