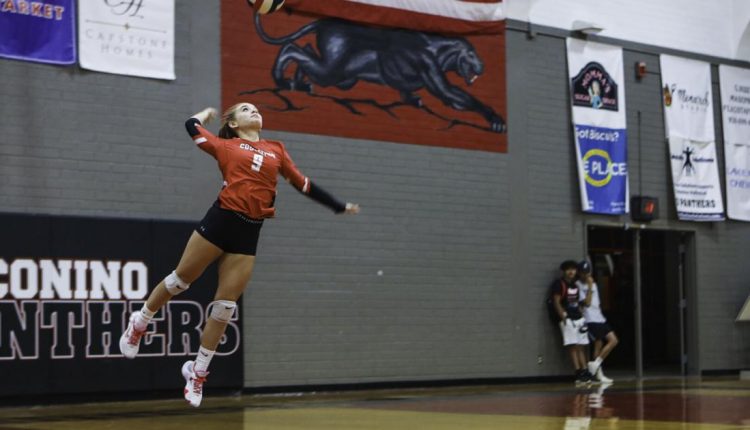 Coconino volleyball played its most dominant match to this early point in the season, sweeping Cortez 25-12, 25-12, 25-10 at home Thursday.

The Panthers were solid offensively in the meeting of the 4A Conference squads, with hitters such as Hope Williamson, Lucy Steigler, Eiley Palmer and others racking up kills from well-set balls. Coconino was efficient with its swings, and allowed Cortez to make mistakes.


“We just wanted to play our game, have fun playing our type of volleyball,” setter Kayla Derryberry said.

Coconino was great defensively, too. Cortez had some solid attackers, but it seemed the back line, led by libero Izabel Pozar, would consistently come up with a good first pass.

The Panthers (2-2, 1-0 Grand Canyon Region) are still finding their way a bit this season, with several new starters and contributors throughout the lineup.

Following a 3-2 loss at 4A power Greenway on Tuesday, Coconino bounced back for its best performance of the season. As the team hosts several other squads in a home tournament over the weekend and is set to face more region foes in the coming week, Coconino hopes Thursday’s result will lead to more wins.

“I think we were happy with the way we played today. I don’t think we knew exactly what we were coming in, but I think we’re going in the right direction,” Pozar said.

The Panthers were set to play three matches in the Coconino Classic on Friday, and will resume play in the regular season at Mingus Union next Friday.

Flagstaff lost in a tiebreaker at Deer Valley on Wednesday night. The defeat was Flagstaff’s second straight.

Flagstaff (1-3, 0-0 Grand Canyon) will compete in the Coconino Classic beginning Friday, and will host 3A Snowflake to resume the regular season on Monday.

The Spartans (4-1, 2-0 North) are off to their best start in coach Erik Carrillo’s four-year history leading them. NPA will take nearly two weeks off ahead of their next match, a city rivalry contest at base Flagstaff on Sept. 20.

hungry? It’s a good week to go gourmet in Tucson