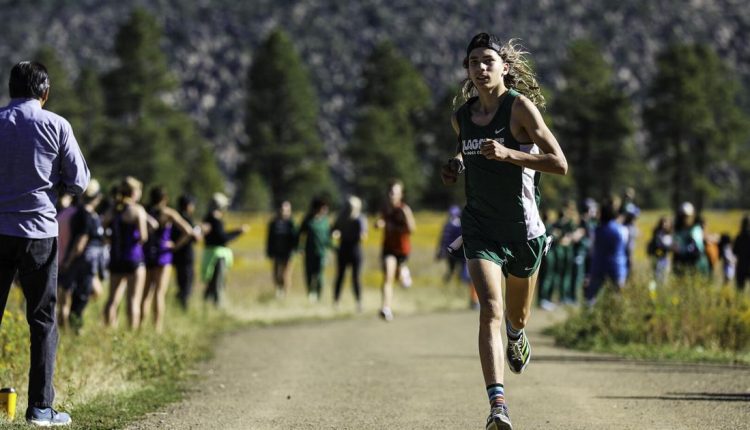 The steady mountains in the backdrop of Buffalo Park resembled the steady performances of the Flagstaff High School cross country teams, which swept the Four Corners Invitational behind dominating victories, with 29 points in the boys varsity race and 34 points in the girls varsity race Saturday morning .

Flagstaff also swept the individual titles, with sophomore Cole Troxler and freshman Taylor Biggambler each earning gold in their respective races, finishing the 3-mile distance in 16:03 and 18:53, respectively.

The strong tradition of distance running at Flagstaff High School comes from a sense of looseness and togetherness. The boys varsity team has a compact range of talent that allows for a lot of team-styled workouts. The Eagles bring the ability to access team consistency in races.


“Communication is key in how the team works together and pushes each other in practice,” Eagles senior Shaydon Begay said.

Having the same energy and mindset is important to the program, as it proves valuable time and again.

The freshman standout, Biggambler, ran away with the girls race after a tactically sound opening mile.

“After I came up the hill the first time, I gained momentum and kept that speed all the way through. I went the fastest I could in the last mile,” Biggambler said.

Biggambler has proven to be an important new piece to Flagstaff’s roster as their postseason pursuits are on the horizon.

The next meet on the schedule for Eagles is on Saturday in Gilbert at the Equinox XC Festival.

It’s the second time she’s won the national title at the distance.

This time, Bruce set a new course record in the process as she clocked a 31:52, smashing the old record of 32:18. She crossed the finish line just three seconds off her road 10K personal best.

NAZ Elite’s Stephanie Bruce is set to compete in the USATF 10K championship race on Saturday in Northport, New York, the location of the prestigious Great Cow Harbor course. It will be the last national championship on the surface Bruce will run as a pro as she nears the end of her retirement lap.

“I really did have a lot of confidence she’d win the race, because when she is fit and healthy and in a field of competitors that are her equal, I like her chances,” Ben Rosario, NAZ Elite executive director, said Saturday . “So I liked her chances going into the race, and I felt like it was hers to lose, and she went out and won it.”

She also won the first-place prize money of $7,500. She also proved her training for the New York City Marathon is going well.

The performance Saturday indicated “she’s very fit and we couldn’t be in a better spot,” Rosario said.

Coconino (1-1, 0-0 Grand Canyon) dropped its first road contest of the season at Arcadia on Friday, blowing a 21-0 lead in the meeting of the 4A Conference programs.

Arcadia scored 20 points in the third quarter, and a late touchdown capped the comeback for the 3-0 Titans.

Senior Quinn Mickelson ran for a team-high 71 yards and a rushing touchdown for the Panthers. Panthers junior quarterback Enoch Watson threw for 100 yards and a touchdown.

The Sun Sports Staff contributed to this roundup.

Police investigate body discovered in a container in north Phoenix