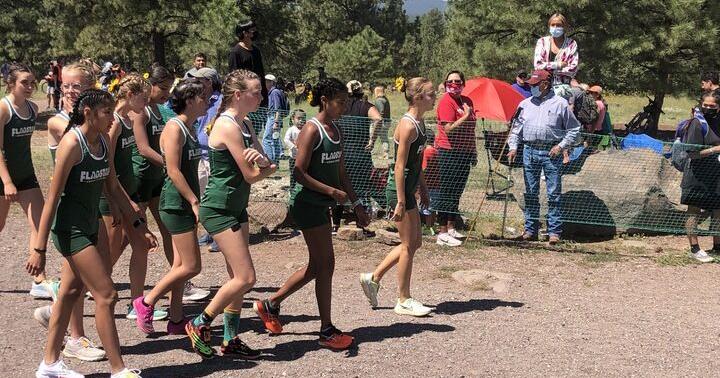 Flagstaff senior cross country runner Mia Hall claimed her second overall win in as many competitions, winning the Fountain Hills Invitational in Fountain Hills on Saturday with a time of 17:28.63.

She crossed the finish line before the runner-up by nearly two minutes.

Flagstaff’s Taylor Biggambler finished fourth in 19:33.77, helping the Eagles place second as a team at 91 points. Highland, a power in Division I, won the girls race with a low score of 45.

The Eagles boys also placed well, taking third in their race with a score of 166. Highland won at 68 points. Flagstaff’s Spencer Lott was the Eagles’ top finisher, placing 19th with a time of 16:50.78.

The Eagles are set to compete in the 41st annual Woodbridge Cross Country Classic in California set to take place Thursday.

The Panthers girls finished second in their race, scoring 55 to first-place Hopi’s 26 points.

Hopi’s runners finished in each of the four top spots. Page’s Alyssa Harris — formerly of Flagstaff High School — finished fifth with a time of 21:43.76. Wheaten Smith was Coconino’s top placer in sixth (21:57.78).

Page is slated to compete in the Ojo Rojo Invitational at Tumbleweed Park on Saturday.

The Spartans and Cougars proved to be the top contenders in the 2A Conference this fall, following their state championship contest from last season.

Northland Prep has still played just one regular-season match — which it won. The Spartans were set to host St. John’s Tuesday.

Northland Prep dropped its fourth consecutive match as nears its restart of Central Region contests, losing Monday in four sets to 3A Winslow on the road.

Middle blocker Bella Moseng recorded 12 kills, 2 solo blocks five digs for the 2A Spartans, who dropped the first two sets, 25-19, 25-17, before avoiding the sweep with a 25-23 victory in the third set. Northland Prep struggled to find other ways to terminate the ball against the hosts, who totaled 15 blocks.

The Spartans (1-4, 1-0 Central) finished with six service aces and committed 13 service errors. Miranda Greene added 10 kills for Northland Prep, is scheduled to play its first consecutive matches as host starting Thursday, when they play the 2A Kingman Academy Tigers.