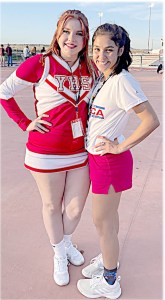 Area high schools were well represented in the Colorado High School Coaches Association’s All-State Games, held last week at CSU-Pueblo.
Yuma High School graduate Clay Robinson played for the White team in the basketball tournament. His team won both of its games to claim the title. Haxtun’s Owen Knode also was on the team. Ethan Johnson of Holyoke, and Merino’s Derrick Alber played for the Blue team.
YHS graduate Harper Whitehead participated as a member of the All-State Spirit Squad. She is the first from Yuma to participate in spirit/cheerleading.
Fatima Duran, another member of the Class of 2022, participated in the All-State Wrestling event.
Lone Star graduate Alivia Weathers competed in the girls basketball team for the Blue team. The team won its first game, but lost its second 79-75, with Weathers scoring 12 points. The Blue was coached by Holyoke’s John Baumgartner, and also included Kristin Vieselmeyer and Lauren Herman of Holyoke, and Karla Godsey of Wray.

Lamya Kuntz of Lone Star competed for the White team in the volleyball tournament. Former Liberty student Kennedy Frank of Stratton also played on the White. Athletes from Sedgwick County, Merino and Haxtun also played in the All-State Volleyball Tournament.