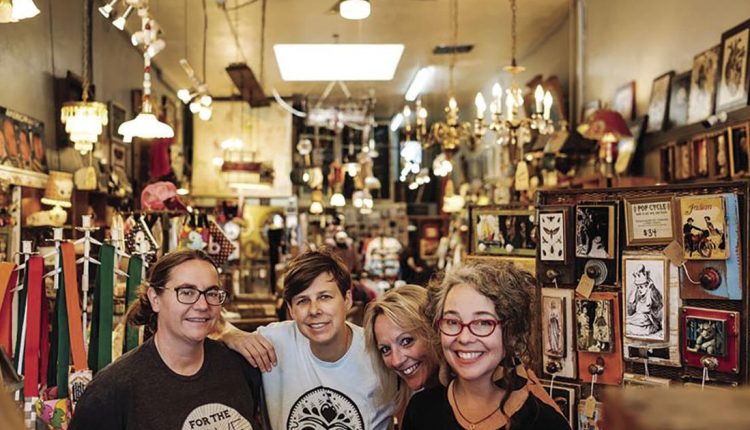 Made in Tucson Market is where the makers hang | News

Maybe it was the appearance of the T-Mobile booths. Or the growing preponderance of sunglass racks. Or maybe it was just the sheer crowd size at Tucson’s biannual Fourth Avenue Street Fair, which was beginning to resemble a sidewalk Coachella.

Whatever the impetus, in 2017 a small group of craftspeople and shop owners in the Fourth Avenue district took a step back to look at what a behemoth the then-47-year-old arts and crafts fair had become, and decided it needed a reboot .

The Made in Tucson Market was created as a smaller, more local and more community-based alternative to the Fourth Avenue Street Fair — a kind of throwback to the fair’s ’70s roots, when the street was a hippie hodgepodge of natural food co-ops , thrift shops and offbeat bookstores. And, like its bigger sibling, MinT is back after a long pandemic postponement for its third event since the 2020 lockdown.

“The street fair was just getting too big for small makers,” explained Libby Tobey, manager of Pop-Cycle, a shop that features locally created art made from recycled materials.

“It was getting too costly to get a booth, and because so many people come, sometimes the booths were too small to really showcase their art,” Tobey added. “It’s hard for a little maker or an individual artist to recoup their cost from something like that, especially if they’re just a beginning maker.

“But we realized in our shop alone we sell works from over a hundred local artists, and we felt there was a need for them to have their own showcase. So we kept asking the Fourth Avenue Merchants Association (operators of the street fair) if we could do this. And then finally we just came together as a group and did it on our own.”

The first MinT was organized by Pop-Cycle, Tanline Printing and its Tiny Town retail shop/gallery space and Rosie’s Barkét, a DIY dog wash and boutique that started on Fourth Avenue but has since relocated to Oro Valley. It featured the works of about 50 local artists and merchants, many of whom were well known to the community — but not for their hidden artistic talents.

“The people who came to the shop would see the names on the pieces and say, ‘Oh, my gosh, that’s my baker that I see every day, but I didn’t know they did jewelry!'” Tobey said. “Or, ‘That’s my neighbor that I wave to every morning when I’m walking my dog. Who knew she made clothing!’ It’s like everyone kind of knew each other in some capacity, which was really cute.”

Alexandria Baxley, a former crew member at Rosie’s Barkét, was one of those shy hobbyist artisans who was persuaded to bake some of her one-of-a-kind cookies for the MinT last November. The exposure gave her the courage to devote more time to her own home-based small business, Ali B Confectionary, where she sells her whimsical creations via her Instagram page (@alibconfectionary).

“It was exciting and it was nerve-wracking all at once, but it was mostly exciting to see the community’s reaction to my cookies,” she said. “And for so many people to like what I was selling and what I was doing was so validating and so encouraging.” Baxley said networking with other makers in the area is a win-win for them all.

“The community supports everyone who’s a part of it, and so whenever you get to meet other artists, we can cross-promote and support each other.”

This winter, the one-day fest, set from 10 am to 5 pm Sunday, Nov. 27, is expected to have more than 275 participants and take up the full two-and-a-half-block stretch on Seventh Street between Fourth Avenue and the train tracks. But Tobey insists the event will retain the connected community feel that was built into its foundation: All artists included in the market must be Tucson residents and must make their goods locally.

“For big things like the Fourth Avenue Street Fair or the Tempe Festival of the Arts on Mill Avenue, they actually bring in all kinds of vendors that are not necessarily local,” she said. “And sometimes corporations sign up, where you end up with big retailers like Sunglass Hut operating booths. I understand the need for that, but we like to show that your community has all these makers and you can buy things from them rather than buying from corporate vendors. There’s just so much you can do within your own community, and that’s what it’s cool.”

Artist Johnny Carrillo has also been there from the start and now creates the signage for the event — as well as a lot of Fourth Avenue shops. Although he regularly hosts his own booth at the events, he sees himself less as a vendor and more as a “facilitator” for the other local makers.

“It feels good to see other artists just grow and get better with their craft,” he said. “Doing what they’re passionate about it, building up big collections and bringing them to the market. To see a little maker or somebody who’s doing artwork kind of on the side take their creations to the market is so cool. Because the marketplace is the true validator of what you do. You sell, you see what is popular, and that gives you a lead on what direction you should be pursuing to be more lucrative.”

The vendors lined up for this month’s MinT include its biggest variety of artisans ever. “Jewelry makers, candle makers, soap makers, print artists, people who do textiles, collage makers — it runs the full gamut.

“The street fair is a lot of fun, too, and some of the vendors here participate in that,” Carrillo added. “But that’s a pretty huge event. This one is more focused on handmade goods, and that’s it. And it’s all from local Tucsonians! It’s everything I love about Tucson, and it just feels like such a good thing.”

Made in Tucson Market

WHERE: On Seventh Street between Fourth Avenue and the train tracks