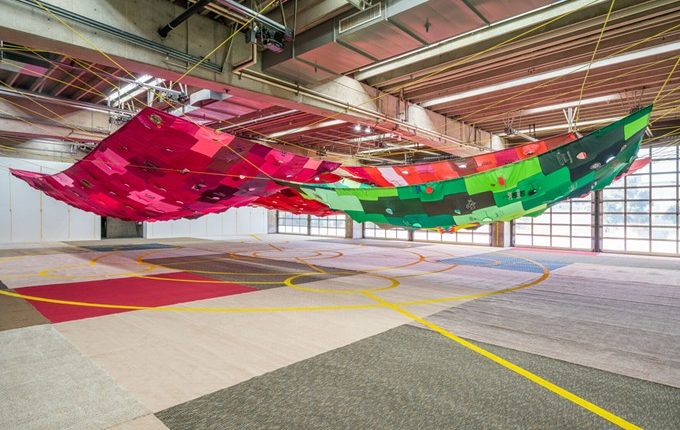 In the past few weeks, as the evening sky began to darken, a building in the city center shone beautiful colors on the streets: magenta, pink, green, yellow, royal red.

The nightly light show comes through the large glass doors of the MOCA-Tucson Museum of Contemporary Art.

But the source of this rainbow beauty, amazingly, is a lot of thrown out t-shirts.

In the huge Great Hall of the Museum, the shirts – brilliantly dyed and sewn together to form huge tarpaulins – dangle from the ceiling. They are tied to the ship’s rigging and move high above the gallery.

In honor of the low origins of the T-shirts, the artist Pia Camil from Mexico City calls the work “Bara, Bara, Bara”, the song used by Mexican street vendors. It is short for “Barato”, Spanish for “cheap”.

Part painting, part soft sculpture, this bold fiber work is visually dazzling and intellectually intense. “Bara” has completely taken over the Great Hall, once a garage for mammoth fire engines, when the building was still a fire station. It’s big enough to hold their immense three-part installation.

Below the swinging “Bara” there is a floor component, the “Autonomous Space Rug”, on which visitors can sit or lie down and look at the colored roof. The carpeting was from a leftover store in Phoenix, and Camil designed his swirl patterns.

A third piece of the installation, “Air Out Your Dirty Laundry”, is outside on the museum’s front terrace. Instead of a flag blowing in the wind on the flagpole outdoors, old shirts and jeans flutter on a clothesline. Locals are invited to donate old clothes to fly on the clothesline. You can also request to use the carpet as a venue for holding socially distant book clubs or other events.

The work is beautiful and even joyful. But it criticizes consumption, labor exploitation and the environmental degradation caused by the manufacture of clothing, especially the use of dyes and way too much water. It is estimated that it takes about 713 gallons of water to make a T-shirt, from the cotton field to the factory to the final wash. Those gallons would be enough drinking water to feed a thirsty adult for well over two years.

Cami’s work follows the life cycle of the shirts. The tees start with orders in the US, for example when a soccer team wants to celebrate a victory or a dealer wants to sell Irish jerseys on St. Patrick’s Day. The job usually goes to underpaid workers in Latin America. The shirts they make, adorned with words and full of slogans, travel to the United States


The proud Irish Americans and lucky soccer fans wear them for a while, but soon enough they’ll give them to a charity or get rid of them in some other way. As the curator Laura Copelin says, “they become trash in the US”

They go back to Mexico to be sold to the poor or to be dumped on landfills. But through the artist’s intervention, some of these Ragtag T-shirts are destined to return to the US (“Bara” also performed in Dallas in 2017 and in Glasgow in 2019.)

Camil buys second-hand and third-hand t-shirts from a cheap store outside of Mexico City. She over-dyes the old shirts in the bright colors and then sews them together in color, red with red, green with green, etc. to make huge tarpaulins.

As soon as they arrive in the designated gallery, the tarpaulins are hung so that the words are hidden so that visitors can read them and think about their meanings. For Camil these texts are a kind of poetry.

The wordless side of the fabric faces the ceiling. The artist also provides peepholes so fans can pierce their heads and marvel at the pure, unpolluted colors.

Unsurprisingly, COVID-19 disrupted Camil’s usual practices. Instead of coming to Tucson to oversee the installation of the work, she was stuck in Mexico. It was up to the museum to put “Bara” together under Camil’s instructions.

“We communicated by phone and had a lot of discussions,” says curator Copelin. The piece should be site-specific and “it changes over time. The way the sails work is different in each venue. ”

The pandemic also led to major changes in the “autonomous space carpet”.

When the work was in Scotland in 2019, Camil created a comfortable base by turning dozens of old jeans into comfortable pillows. Photos show visitors curled up next to each other, lounging or resting, or looking at the fabric roof. Obviously this iteration would not work in corona times.

For the Tucson Show, Camil asked for comfortable carpets to cover the entire floor of the Great Hall. She designed an elegant pattern of circles and lines that wind over the carpet. Inspired by images from 18th century French gardens to maps, Camil perched on lines that served as borders to remind guests to maintain social distance.

The item of laundry outdoors also has COVID origins. Last fall, Marfa, an art institution in rural Texas, offered artists jobs “to do something they CAN do during the pandemic,” says Copelin, who also works with Marfa. Camil won one of the scholarships. Camil, based in Mexico, came up with a piece that “blew up what could be a flag,” says Copelin. Instead of national flags, discarded clothes from real life waved in the open air. The play started over in Tucson, with different clothes.

Camil, who received a BFA from the Rhode Island School of Design and an MFA from the Slade School of Fine Art in London, has received international attention for “Bara, Bara, Bara” and other works reminiscent of the “Mexican urban landscape” writes in one of her biography.

“I’ve been interested in her for a long time,” says Copelin. After learning about Camil’s exhibition at the Dallas Contemporary Museum, the curator contacted the artist and eventually invited her to show her work at the MOCA. COVID Allowed: “We Hope To Get You Here Before The Show Ends”

Free during the pandemic

EXTRA: From the beginning of May you can participate in the installation in two ways. You can apply to MOCA for a mini-grant to use the carpet room temporarily for your own event – book club, dance, etc. And you can join the lingerie piece outside by donating a piece of clothing, recording a story on that shirt, or denim garment and leave You fly it high in the sky on the clothesline. See website for details.

Boom or bubble? How long will the hot Phoenix real estate market last?

If we face our pandemic grief, we can move to a better “normal state”.