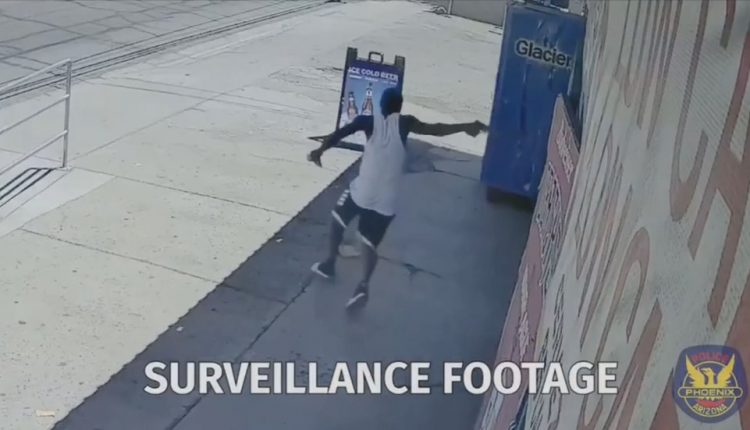 PHOENIX (3TV/CBS 5) — A man is in custody after police say he shot at a Phoenix store clerk because he was upset over cigarette prices. Officers say surveillance video captured 34-year-old Gregory Boston attempting to shoot the employee nearly two weeks ago.

Fidel Pabon said he doesn’t technically work at the QuickStop near 7th Avenue and Buckeye Road; he only stays inside the store when his wife is working to make sure she is safe. “She’s alone. In the daytime, nobody’s here, and she’s alone, so I’m worried about people like him,” Pabon said.

On June 15, around 1:30 pm, Pabon said Boston, who they say has been in the store before, was asking him about various products. “He asked me a lot of times the prices. I said I don’t know you gotta bring it to the scanner,” Pabon said.

Pabon said Boston became angry and dropped all of the items and left. He came back about five minutes later. “He say, ‘Give me cigarettes!’ I say, ‘No, you say I’m rude, I have to learn the prices, so find another place to get the cigarettes,’” Pabon said.

Court paperwork says Boston began to walk out but reached into his pocket and pulled out a gun. Boston shot at Pabon, narrowly missed him, and then ran away from the store. The bullet hit the window and struck the back wall above the cooler. “Seconds later, some customers come inside the store and say, ‘Are you OK?’ I see the guy running with the gun’ and at the same time, I called the cops,” Pabon said.

According to court paperwork, Pabon told officers he had seen Boston in the store before and believed he lived in the neighborhood. On June 17, officers took Boston into custody after they saw him leave a nearby apartment. According to court documents, Boston told police that he was at the store at the time of the shooting but shot the gun by accident. He also admitted to police that he was not supposed to have a gun due to prior felonies. Police say officers searched Boston’s apartment and found a loaded gun in the bedroom closet.

Boston was booked on one count of aggravated assault, two counts of discharging a firearm in city limits and one count of possession of a weapon by a prohibited person.