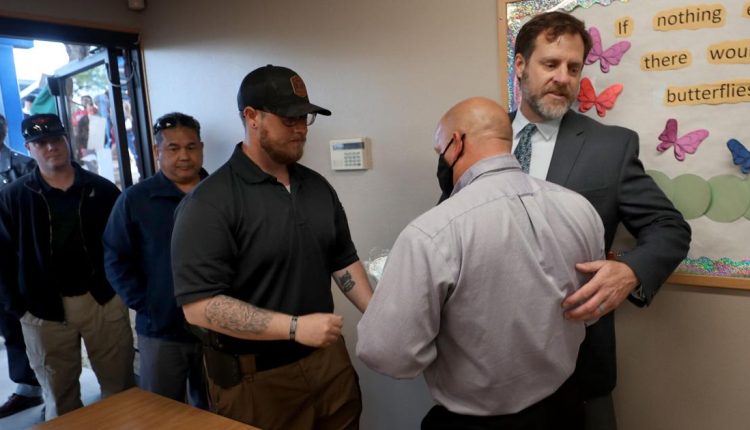 One of the men who showed up with zip ties to confront the principal of Mesquite Elementary School over COVID-19 protocols in 2021 was found guilty of disrupting an educational institution and several other charges related to the incident.

On Wednesday, Kelly Walker was found guilty in the Tucson City Court of two counts of interference with or disruption of an educational institution, intentionally or knowingly remaining on property of an educational instruction so as to interfere with its lawful use, refusing to obey lawful order to leave educational property and one count of disorderly conduct. All are misdemeanors.

On Sept. 2, 2021, a parent went into the principal’s office at the Vail school upset that his child would have to isolate and miss a school field trip because of possible exposure to someone with COVID-19, the Associated Press previously reported. Walker and another man also barged into the office.

The Associated Press reported that one of the men was carrying large black zip ties that could be used as handcuffs. The men were claiming that the principal was breaking the law and they were going to arrest her.

Walker argued that the incident was justified because they were “bullying” children and families by imposing pandemic quarantine he considered illegal, according to a column by the Star’s Tim Steller.

“I would like anybody who can who’s close by to go to Mesquite Elementary School and back up these parents,” Walker said via live video online. “What’s happening is wrong, and we’re not going to have this in our community.”

Walker’s sentencing is scheduled for Nov 17.