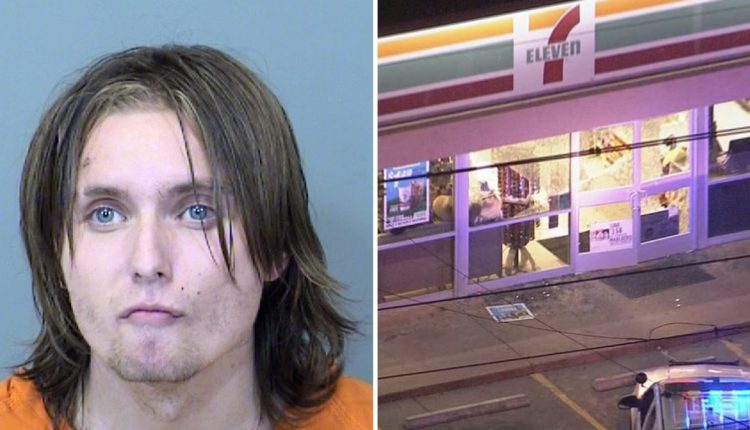 Man shot by officers at Phoenix 7-Eleven was armed with 4 guns, knives, ammo

PHOENIX (3TV/CBS 5) — Police say the man who was shot by police as he was walking into a Phoenix 7-Eleven filled with people was armed with guns, loaded magazines, knives and an ax and thought demons were after him. The man was identified as 22-year-old Isaiah Ries Manning, who was released from the hospital and booked on Wednesday.

On Sept. 22, around 7:30 pm, a woman called 911, saying her son, Manning, was acting strange and saying “demons were after him” before he left her house near 31st Avenue and Greenway Road with several guns and a backpack filled with weapons, investigators said. Court documents say Manning’s mother and her daughter heard a loud gunshot from where Manning was walking. Police say she also told them Manning was “anti-police.”

Officers then received a tip from Manning’s father, who saw him walking and asked him to get in the car, court paperwork says. However, Manning refused and kept walking. Officers then tracked him to the parking lot of a nearby 7-Eleven. Police say officers noticed Manning was holding a gun magazine and told him to stop. However, he didn’t listen and continued walking to the front door of the store filled with employees and customers. According to court documents, officers were afraid the people inside the 7-Eleven “would become hostages or victims” if Manning went inside, so they shot Manning several times. Manning then fell to the ground inside the store. Officers safely got everyone out, and manning was taken to the hospital. No customers or employees were hurt.

On Wednesday, police interviewed Manning after he got out of the hospital. According to court paperwork, Manning told police he believed his rifle was “actually a gun” and “allowed by law.” He also reportedly claimed the gun’s suppressor was a “prop” and denied ever shooting the gun. However, investigators said Manning admitted to building the suppressor and had it with him, along with several other guns, when he walked into the 7-Eleven. He faces two counts of prohibited weapons charges.

An obscure, but vital, state board overseeing city tax codes hasn’t been able to muster a quorum since May 2019