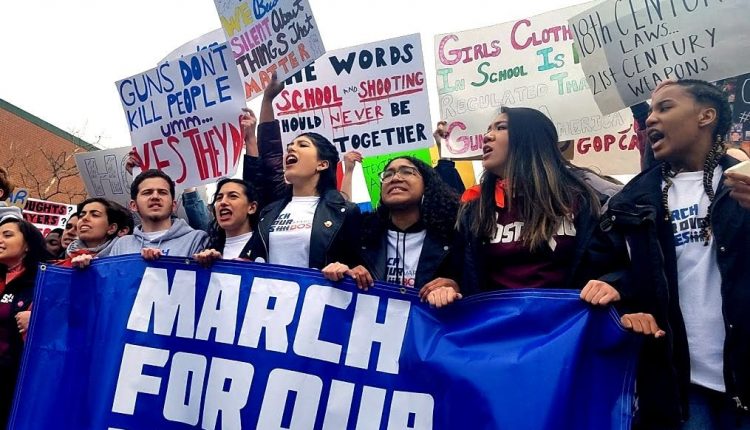 PHOENIX, AZ — In the wake of rampant gun violence both here in the Valley and across the country, March for Our Lives, founded in 2018 by survivors of the Parkland, Florida, high school massacre, will be marching at the nation’s capital in support of gun control Saturday, June 11. Hundreds of sister marches will be held in cities across America, including one in Phoenix, set for the same day.

The Phoenix event is set for 5-7 pm Saturday at the Arizona State Capital, 1700 W. Washington St. The local event is student-led, and you can sign up here to attend.

The demonstrations come after the latest school shooting in Uvalde, Texas, on May 24 that resulted in a profound loss of lives.

Nineteen children between the ages of 9 and 11, and two of their teachers, were killed inside a fourth grade classroom at Robb Elementary as law enforcement officers waited for more than an hour outside, according to reports. Justice Department investigators are expected to focus their probe on police response to the shooting.

March for Our Lives organizers’ immediate goal is to pressure elected officials to “step up and pass universal background checks” in the US Senate. The House approved a bipartisan background check bill in 2019, but it has since languished in the Senate.

“No more time. It’s time Democrats, Republicans, gun owners and non-gun owners come together and stop focusing on what we can’t agree on and start focusing on what we can even if small,” activist David Hogg said on Twitter. Hogg was 17 in 2018 when 14 of his fellow students and three staff members at Marjory Stoneman Douglas High School were killed by an 18-year-old gunman with an assault-style weapon.

“We’re doing another march on June 11 sign up here and help us make this time different,” he continued, alluding to previous times when gun law reforms failed to materialize from national outrage over a mass shooting.

US Sen. for Arizona Kyrsten Sinema is one of four senators working on a package of legislation to reform background checks and red flag laws, bolster school safety and create new mental health programs, Politico reported.

US Sen. for Arizona, Mark Kelly supports background checks for gun purchases, along with other gun safety reforms. Kelly’s wife, former US Rep. for Arizona Gabby Giffords, suffered a brain injury in a mass shooting during a constituent event in Tucson in 2011. Giffords and Kelly have strongly advocated for gun reform since then.

In a prime-time address Thursday, President Joe Biden outlined a far more ambitious and politically difficult proposal that includes expanded background checks. He also called for the restoration of a ban on assault-style weapons and high-capacity magazines, one he helped pass as a senator in 1994 and that Congress allowed to sunset in 2004.

Failing that, Congress should at least find a way to keep those military-style weapons out of the hands of those with mental health issues, or raise the minimum age to buy them from 18 to 21, Biden said.

“How much more carnage are we willing to accept?” Biden said. “Don’t tell me raising the age won’t make a difference.”

He called on Congress to end “outrageous” protections for gun manufacturers, which severely limit their liability over how their firearms are used, comparing it to the tobacco industry, which has faced repeated litigation over its products’ role in causing cancer and other diseases.

“Imagine if the tobacco industry had been immune from being south, where we’d be today,” Biden said.

If Congress doesn’t act, voters should show their outrage and turn gun control into a bellwether issue in November’s midterm elections, Biden said.

A secondary goal for March for Our Lives organizers is to push young voters to the polls in the November midterm elections, a strategy that worked in the 2018 midterms. Its 2018 march, held just over a month after the Parkland massacre when anti-gun fervor was high, fueled a 47 percent increase in young voter turnout from the 2014 midterms.

It was the highest youth vote turnout ever, increasing in every state, according to a Tufts University analysis. In a first, Everytown for Gun Safety, a gun-reform lobbying group backed by billionaire Michael Bloomberg, outspent the National Rifle Association in federal elections, according to The Trace, a news organization that investigates gun violence.

March for Our Lives said voters made clear in 2018 “the status quo was no longer acceptable” by kicking a record number of NRA-backed candidates out of federal and state policymaking offices.

The Uvalde school shooting was the 27th of 2022, according to Education Week, an independent news organization that covers K-12 education and has been tracking school shootings since 2018. In that time, 88 people have been killed and 229 others have been injured in 119 school shootings.

Gun violence overall has spiked to the point that it’s a public health crisis, according to the federal Centers for Disease Control and Prevention, which earlier this year reported a near-record-high number of gun-related deaths in the United States in 2020.

An analysis of that data shows firearms were the leading cause of death among children for the first time in 2020.

Get more local news delivered straight to your inbox. Sign up for free Patch newsletters and alerts.