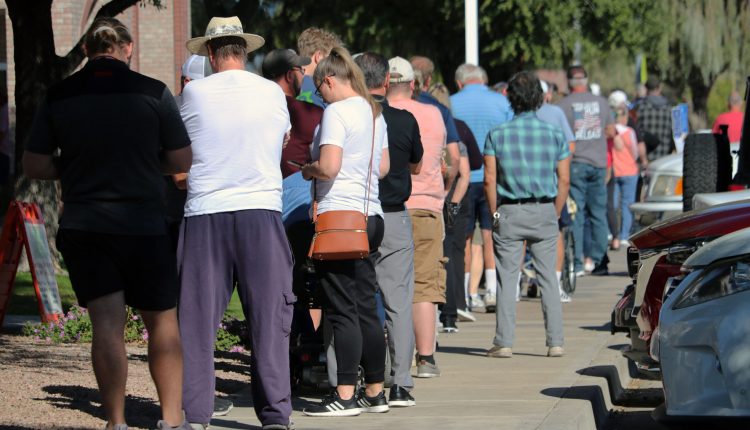 The Maricopa County Board of Supervisors certified its 2022 election results Monday at the close of an acrimonious meeting full of yelling and interruptions from a crowd angry about the administration of the election and what they claimed was voter disenfranchisement.

The supervisors voted unanimously to certify the election at the end of a more than four-hour-long meeting that included public comments from 41 people, all but four of them leveling scathing criticism of the supervisors and Maricopa County Recorder Stephen Richer, who were in charge of the election.

Some of the speakers even went as far as telling county leaders and election officials that they were evil and that they were going to hell. Bill Gates, the county board chairman, repeatedly asked members of the crowd to be quiet while others spoke, threatening to recess the meeting if the crowd became too rowdy or to kick out people who wouldn’t stop yelling over others while they tried to speak. At least one woman was asked to leave when she refused to stop yelling.

Chris Hamlet, who made a failed bid for Mesa School board in the Nov. 8 election, said that public comment during Monday’s meeting amounted to political theater, since he believed the supervisors had already made up their minds to certify the election.

“This is a war between good and evil, and you all are on the side of evil,” Hamlet told county officials, telling others in the crowd if they want to fight corruption in elections, they need to get God on their side.

Lesley Shepherd said she and several people in line with her at a voting center on Election Day couldn’t get tabulators to read their ballots. She also played a recording that she said proved that a computer programmer could introduce code into tabulation machines that would change the outcome of elections.

“We are coming to you, asking you to dig deep in your heart and not be condemned to hell one day,” Shepherd said, adding that she isn’t a member of the Republican Party but is a registered independent, as she continued to yell at the supervisors.

Several of the commenters criticized the board’s two-minute time limit for each member of the public who spoke during the meeting. That limit is routine at the county board’s meeting, and similar limits are in place across Arizona at county boards, city councils, school districts and more — including at the state legislature, where Republican committee chairs frequently limit testimony much more severely.

“This whole process of the two minutes is a violation of the First Amendment right to petition our government and address our grievances,” said Randy Miller. “You have no right to limit our time while you give government officials who work for us all the time in the world that they need to talk about what they are gaslighting us about.”

County Supervisor Jack Sellers expressed disappointment that many of the people who gave public comments, especially those who asked pointed questions about the election, left after speaking, failing to stay and listen to the county’s answers. Under Arizona law, elected officials aren’t allowed to respond directly to individual members of the public, but the meeting agenda included an in-depth review of the election after the public comment period ended.

During that portion of the meeting, county election officials explained things like how all ballots were counted at the two polling centers where ballots that had not been counted were commingled with ones that had been counted (the original count for that entire batch of ballots is thrown out and the whole batch is recounted) and why the counting process takes so much longer in Arizona than it does in California. County officials also made clear that, although printer issues that caused tabulator problems negatively impacted voters, no voters were turned away.

Voters were all given the option to fill out a new ballot to see if the tabulator would accept it, put their ballot into a secure box named “door 3” to be counted later at the county’s central tabulation center or to check out and head to a different voting center to vote.

Many of those who voted on Election Day, including some who spoke during Monday’s meeting, said they didn’t want to put their ballot in door 3 because they were afraid it wouldn’t be counted.

“Feed your ballot through the onsite tabulator yourself. Do not push the green button if your ballot is not read correctly. Do not put your ballot in ‘box 3’ or ‘door 3,’” read an image she published shortly after 8 a.m. on Election Day. In another tweet with the same image, Ward urged her 220,000 followers to “SHARE & RT” her advice.

The county has been using door 3 for voters whose ballots couldn’t be read by tabulators since 1996, when Maricopa County began using on-site tabulators at voting sites.

“This is a very common practice,” Jarrett said.

In eight of Arizona’s 15 counties, there are no on-site tabulators on Election Day, and voters only have the option to put their ballot in a secure box to be counted later.

But election workers received pushback from voters early in the day Nov. 8 when they suggested voters put their ballot in the secure box to be counted later.

“It’s because we had highly influential members of the public telling voters not to put their ballots (in box three,) creating fear, creating fear in those voters,” Jarrett said.

In addition to Ward and the AZGOP, Republican gubernatorial nominee Kari Lake and secretary of state candidate Mark Finchem encouraged voters not to use door 3 on Election Day but to stay in line until their vote could be tabulated.

In answer to questions from the public about why trucks were leaving the county’s central tabulation center to go to Runbeck Election Services in the hours and days after Nov. 8, the county explained that signatures on early ballots are scanned by Runbeck so that they can be compared to the voter’s previous signatures to ensure the ballot is valid. The county says that the chain of custody for the ballots is maintained throughout this process, with observers from both parties.

While one public commenter said his wife waited two hours to vote in person on Election Day, and he waited an hour, election officials said that 114 out of the county’s 223 voting centers had maximum waits of 15 minutes or fewer. There were seven voting centers that at some point had wait times of one hour and twenty minutes to almost two hours, but there were vote centers nearby the ones with long wait times that had much shorter lines. The county provided an online map of voting centers with regular updates on wait times on Election Day.

Most of the speakers said they were Maricopa County voters, and several of them either worked at the polls or were observers. But one man who described himself as the “chief election denier” said he was from Colorado, and Ben Bergquam, a conservative self-described journalist from California, said he was denied access to the county’s election office to report on the election.

Maricopa County has been a target of election fraud conspiracy theorists since 2020, when former President Donald Trump claimed the presidential election was stolen from him. Election denialism, even among elected officials in Arizona continued, led to a partisan audit of the 2020 election in Maricopa County that found no evidence that the election was rigged.

That trend was amplified by several election-denier candidates on the ballot this election, and printer issues at Maricopa County voting centers on Election Day contributed to additional worries about election administration in the county.

Some of Arizona’s most well-known Trump-endorsed candidates who ran on the “Big Lie” that the 2020 presidential election was stolen from Trump still have not conceded races that their Democratic opponents won by thousands of votes, including Lake and Finchem.

Lake and Republican candidate for attorney general Abe Hamadeh have both filed lawsuits against Maricopa County ahead of the election certification. Lake’s suit demanded information from the county about Election Day issues, while Hamadeh’s suit challenged the election results, which legally cannot be challenged until they’re certified, according to Arizona law.

Arizona’s Republican attorney general sent a letter to Maricopa County Nov. 19, demanding answers from the county about Election Day issues, to which the county sent a partial response Sunday.

While several members of the public, along with Lake, Finchem and Hamadeh claimed that Republican voters were disenfranchised by Election Day printer issues, the county answered that voter turnout this year was better than it typically is during midterm elections, especially so for Republicans.