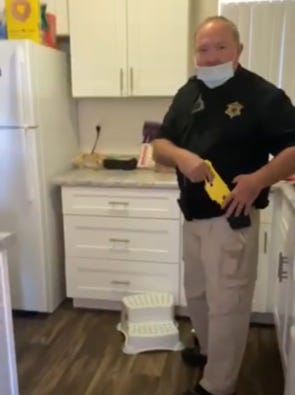 The constable at the center of an Arizona Republic investigation has submitted his resignation, just weeks after the ethics board suspended him for 30 days for pulling his weapon on an unarmed tenant, and violating multiple ethics codes and laws.

Doug Clark, constable for the Agua Fria Justice Precinct, submitted a letter to county supervisors this past Wednesday, saying he will serve out his term until Dec. 31. He cited medical reasons for leaving.

Clark is under multiple investigations for his involvement in a shooting that happened in July 2022, when he admitted to entering an evicted tenant’s home with his deputy constable, Steve Perkins, when they shouldn’t have. Constables are authorized to serve eviction paperwork along with other processing jobs of their respective courts, but they don’t have police authority to go into homes or remove anyone after an eviction has already been served.

Initially, the narrative around the shooting from the constables involved was that the two were processing the eviction paperwork. But exclusive leaked footage obtained by The Republic showed that the constables had already served the paperwork four days before.

A gunfight prevailed, and the tenant, 32-year-old Marcus Mungeam, later died from gunshot wounds to the head and neck, but neither Clark nor Perkins admitted to shooting him. The county medical examiner initially labeled it as a homicide, but then changed it to undetermined after the Maricopa County Sheriff’s Office began investigating.

The ‘Cowboy’ Constable:Read the original investigation into Clark, here.

A month later, Clark pulled his gun on another tenant being evicted who was trying to secure his dog from escaping or attacking the constable. Body camera footage from a responding Avondale police officer, obtained by The Republic, revealed that the person filed an official complaint against Clark. Moments later, according to text messages reviewed, Clark reached out to offer the tenant money.

In both instances, Clark had not filed use of force incidents, as required by state regulations, nor did he surrender his weapon until a medical clearance was given to return to work, according to documents obtained by The Republic.

Clark’s actions were brought to light by the Arizona Republic’s investigation into Clark’s lengthy history of posing as a police officer, using force against tenants and illegally accessing criminal databases in order to get dirt on political rivals and professional critics.

His misuse of public technology and equipment, along with a lengthy rap sheet of disciplines, resulted in the Maricopa County Sheriff’s Office firing Clark just after he was elected to be a constable to the downtown precinct.

More on Clark:Embattled constable urged to resign after holding tenant at gunpoint

When the ethics board that oversees constables found that Clark had improperly used county vehicles and other property for personal use, they urged him to resign in 2018. He didn’t and eventually lost his race that midterm primary, but was successful in becoming a write – in candidate in the Agua Fria Justice Precinct later that same year.

This past November, he won the seat again. But in a Dec. 8 ethics board meeting, the board almost unanimously approved to suspend Clark for 30 days and urged his resignation, again.

Clark’s medical issues have been held with for privacy reasons, but the ethics board learned that the constable was being treated for brain-related injuries, which Clark attributed to on-the-job traumas. He also submitted an evaluation from a social worker, but the board noted that the person did not provide evidence they had the medical authority to determine if Clark was capable of continuing to work.

The County Board of Supervisors will appoint a new constable to head the Agua Fria Justice Precinct, though it’s unclear when that will happen.

Joseph Darius Jaafari is an investigative reporter who covers criminal justice issues. He can be reached via email [email protected], on his Twitter @JosephJaafari or by cell at 480-356-8873.