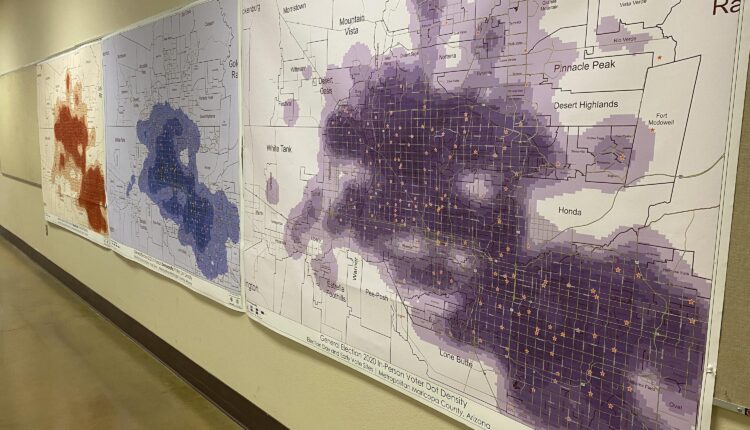 CLAIM: Election officials in Arizona’s Maricopa County displayed a map of Republican voters in the county at its central tabulation facility in Phoenix, but did not have a comparable Democrat voter map.

AP’S ASSESSMENT: False. Heat maps showing past Republican and Democrat voter turnout are both displayed in the Maricopa County Elections Department’s central tabulation facility, according to a spokesperson for the department and a photograph she provided to The Associated Press.

THE FACTS: A photograph of a heat map showing Republican voters in Maricopa County displayed at the tabulation center spread widely on blogs and social media Monday, with many users claiming that no equivalent Democrat voter map was displayed. Heat maps use data visualization to examine information.

“Maricopa’s Heat Map of GOP voters. No Heat Map of Independents. No Heat Map of Democrats. Just Republicans,” Mark Finchem, a Republican who lost his bid for Arizona secretary of state in the midterm election, wrote on Twitter Monday. The tweet was shared over 1,000 times.

A Monday blog post similarly asserted that Maricopa County displayed a heat map of “expected” GOP voters and that the elections department “did not have a similar Democrat heat map hanging on their wall.”

But that’s not correct. Maricopa County elections officials displayedit heat maps showing both past Republican and Democrat voter turnout, Megan Gilbertson, a spokesperson for the Maricopa County Elections Department, wrote in an email to the AP.

The maps, which are displayed in a hallway at the county’s central tabulation facility in downtown Phoenix, show in-person voter turnout in the 2020 general election, Gilbertson wrote.

The maps are used to make “data-driven decisions on the best places to have voting locations in future elections,” she explained.

“The Maricopa County Recorder’s Office has a Geographic Information System (GIS) team that makes all of the maps in-house,” Gilbertson added. “We use the turnout data by party for elections such as the Presidential Preference Election, which is a party-only election. We use the all-voter maps for future planning for Primary and General elections.”

The maps were made in late 2020 and were hung in the facility hallway in January 2021, according to Gilbertson. Similar in-person turnout maps were made in 2019 during planning for the 2020 presidential preference election.

One of the blogs that shared the false claim about the county only having a Republican map has since published an additional post acknowledging that a Democrat map was also installed.

Finchem did not respond to the AP’s request for comment.

This is part of AP’s effort to address widely shared misinformation, including work with outside companies and organizations to add factual context to misleading content that is circulating online. Learn more about fact checking at AP.

Suspect arrested, man identified in reference to man being stabbed on Tucson’s southwest side | Criminal Law