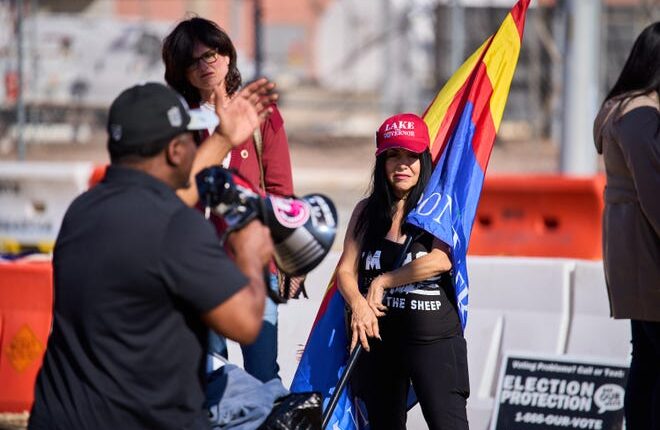 Maricopa County election has been certified. Let the grifting begin

The Maricopa County Board of Supervisors on Monday voted unanimously to certify the results of the 2022 election, meaning it’s all over but the shouting.

And, well, the protesting, the suing and the general all-around cry-babying that the election was stolen right from under Kari Lake and company.

To quote one of Lake’s recent appeals for funds: “With a contribution of $5, $10, or $35, I can reach every corner of the state and make sure that Republicans know that their ballot may NOT have been counted.”

Lake, others continue to pitch a fit

For weeks now, Team MAGA’s top candidates have been busy pitching a fit about the fact that they lost, filing lawsuits, demanding a new election and in general, doing anything and everything they can to undermine confidence in Arizona’s Nov. 8 election.

There was Kari Lake over the weekend, waxing on – without providing any evidence, of course – about the “mass voter disenfranchisement” in Maricopa County.

“We know we WON this election and we are going to do everything in our power to make sure that every single Arizonan’s vote that was disenfranchised is counted,” she told Real America’s Voice on Saturday.

There was Abe Hamadeh, filing a lawsuit last week to block the state from certifying the vote – or, in the alternative, to declare him the winner of the attorney general’s race. Hamadeh lost to Democrat Kris Mayes by 510 votes, triggering an automatic recount that will happen after the state certifies the election on Dec. 5.

“I’m not stopping now. Let’s do this Arizona,” he tweeted on Saturday.

Naturally, Rep. Paul Gosar got into the act. “Thousands, possibly tens of thousands of voters on Election Day in Arizona were disenfranchised and unable to cast their vote due to the unacceptable incompetence of Maricopa County. This election needs a do-over,” he tweeted on Friday.

Or more likely … no one was disfranchised.

But if some people, indeed, didn’t vote, perhaps the blame lies with the leaders of the America First movement—the ones who told them not to vote by early ballot and to be suspicious of anything and everything on Election Day.

Did it really disenfrancise voters?

Sure, there were problems on Election Day, as there always are. Maricopa County Supervisors Chairman Bill Gates said as much on Monday.

“This was not a perfect election,” he said, shortly before the vote to certify the election. “But it was safe and secure, the votes have been counted accurately.”

Interestingly, precious few of the several hundred people who showed up on Monday to complain stuck around long enough to hear the county debunk, in detailed fashion, their various claims of the many ways in which the election was stolen. But then, they’ve been groomed not to believe anything elections officials say anyway.

“Voters in Arizona were disenfranchised. Period. We don’t care what the @MaricopaVote says,” the party tweeted.

Maricopa County on Sunday acknowledged printer problems in 43 of the county’s 223 voting centers on Election Day but said no voters were disenfranchised and no laws were broken.

“Every voter was provided a ballot by which he or she could record their votes, and all such ballots cast by lawful voters were tabulated, whether in the vote center or at the Maricopa County Tabulation and Election Center,” deputy Maricopa County Attorney Tom Liddy , a lifelong Republican, wrote.

In his response to questions from the attorney general’s Elections Integrity Unit, the county addressed some of the MAGA team’s biggest complaints:

MAGA COMPLAINT: Republican voters were forced to wait in line for hours, with potentially tens of thousands leaving before they could vote.

MAGA COMPLAINT: Because of printer problems, voters were told to put their ballots into a box, to be taken downtown to be counted, but nobody knows if those ballots were counted.

IN FACT: Since 1996, the county has used secure ballot boxes to collect ballots that cannot be read by the tabulators. They are then taken downtown and counted.

This year, printers at 43 vote centers experienced problems on Election Day. Voters were advised by poll workers to deposit their ballots into those secure “Door 3” ballot boxes. Sadly, some voters, groomed for two years not to trust elections officials, declined to do so.

“Despite this being a legal, secure, and reliable voting option, many high profile and influential individuals instructed voters to not deposit their ballots in Door 3,” the county reported.

Individuals like state GOP Chairwoman Kelli Ward, who shortly after the polls opened on Nov. 8 warned, “DO NOT PUT YOUR BALLOT IN ‘BOX 3’ OR ‘DRAWER 3’.”

And Turning Point USA’s Charlie Kirk, who warned: “DO NOT PUT YOUR BALLOT IN BOX 3 TO BE ‘TABULATED DOWNTOWN’.”

In the end, 16,724 voters opted to drop their ballots into the Door 3 box, either due to printer problems or because they used ballpoint pens the tabulators were unable to read rather than the markers provided at the voting centers.

MAGA COMPLAINT: Potentially thousands of voters left one polling place due to printer issues and went to another but were not allowed to vote.

IN FACT: The county reports that 206 voters checked in at one voting center then left to cast their ballots at a second location. Of those, 84 had properly checked out of the first voting center and were given standard ballots that were immediately tabulated. The remaining 122 voters – the ones who didn’t check out of their first polling place – were given provisional ballots. Of those 122, 109 were checked to ensure the voters hadn’t already voted, and then counted.

Yet you wouldn’t know it from the irate voters who lined up on Monday morning to call the supervisors “traitors” and “vote traffickers”, to cite Bible passages suggesting that county officials are forever damned and in general to rail about “We the People” because the vote didn’t go their way.

“This is clear voter disenfranchisement,” one voter said.

“If you certify today, the only thing you will be certifying is your corruptness,” said another, who acknowledged that both he and his wife were able to vote.

“We have no confidence at all in our elections process,” one woman said.

I believe her. After all, she’s been told for two years by Lake, Ward and a who’s who of hard right leaders that our elections can’t be trusted.

Lake on Monday continued her tirade, with her campaign announcing that the supervisors ignored “overwhelming proof of voter disenfranchisement”.

“This,” the Lake campaign tweeted, “is far from over.”

After next week’s state certification of the 2022 election, look for Lake and company to file their lawsuits challenging the election results − at which time they can introduce their “overwhelming proof.” My guess is their complaints, just as in 2020, will be long on talk and light on actual evidence.

That’s because the real bottom line is just this: Lake and her fellow America Firsters flat out lost. And will now spend the next two years screaming about it.

And raise money to “fight” it.