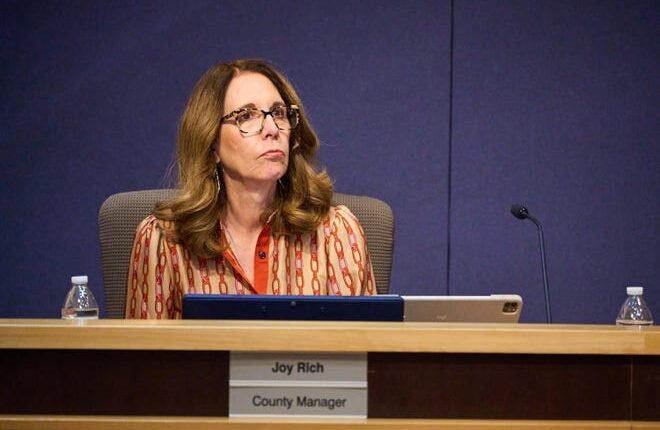 Maricopa County Manager Joy Rich will retire in April after over six years in her position and more than three decades of public service.

“The reward of serving the community and making a true difference in people’s lives never gets old,” Rich wrote in a letter to county employees. “That’s what makes it hard to say goodbye.”

During her tenure, she acted as the CEO of the fourth-largest county in the United States, which employs about 13,000 people and has a $4.5 billion annual budget.

Rich was the county’s first female manager and guided it through numerous headwinds, including the COVID-19 pandemic and controversy over county elections.

She also implemented a new approach to hiring, recruitment and retention for employees, expanding parental leave and encouraging competitive salaries to attract new talent. And she saw the fast-growing county encounter new challenges, such as a lack of affordable housing.

“She called me … and she said, ‘I’m going to let you know, I’m telling my staff tomorrow — I’m going to retire,'” said Board of Supervisors Chairman Clint Hickman. “My direct quote was, ‘Aw s—.'”

Rich had an amazing ability to mentor her staff and work with city governments and other outside organizations, Hickman said. She also ran a “tight, fiscally conservative” ship, a trait Hickman said he hopes to find in her successor.

“She’s a person who just always hit things head on, fixed problems and guided the way for people that were underneath her,” he said. “She’s the perfect brand of a leader.”

County supervisors intend to launch a national search for her replacement.

Hickman and other supervisors have yet to iron out the details of who might lead the county in the interim after Rich departs, or what the hiring timeline looks like for the position.

But Hickman suggested that it could look similar to the situation that followed the departure of former County Manager Tom Manos, Rich’s predecessor. At that time, county supervisors appointed an assistant county manager not in the running for the position to temporarily take over, eventually choosing rich from a pool of internal and external candidates.

“We’ll be putting feelers out there,” Hickman said, adding that he doesn’t intend to rush the process. “We’ll be letting everybody know, the entire country know, that we have an opening.”

What does the county manager do?

County managers are responsible for overseeing staff operations and ensuring work is happening in line with priorities handed down by the board.

“Most of my job is being a bit of a shock absorber between the politics and the policies of what goes on and the work of the staff,” Rich said. “My job, to put it simply, is to take the policies of the board and align our staff with delivering those.”

In Maricopa County, the county manager oversees more than 40 departments. Some, like the county’s budget and finance departments, are mostly internal. Others, such as Animal Care and Control and Public Health, often interact with the public.

Rich said she’s found the job rewarding, but also stressful and, at times, all-consuming. As a mother of three children, she’s had to balance her work with her family — something she said her successor should be prepared for.

“These jobs can be rather intense,” she said. “They become lifestyles.”

Rich, 58, took over as county manager after years of working in local government.

A Phoenix native, she has a bachelor’s degree in geography and a master’s degree in public service from Arizona State University. She began her career as a planner with the city of Phoenix in 1988.

She left for a stint with the city of Glendale as a planner and neighborhood partnerships administrator, then returned to Phoenix and stayed there until 1997, when she joined Maricopa County as a planning manager.

“I’ve been county manager for a little over 6 1/2 years, and I think that’s a good run,” Rich said. “You have a lot of things you want to implement, and then at some point it’s time for someone else to take the reins.”

Rich was known to staff for keeping a low profile — both in public board meetings, where she rarely spoke at length, and in internal written correspondence to staff, which she usually kept short.

Hickman said he’s caught himself occasionally forgetting to ask Rich for an update at the end of formal board meetings, when supervisors and the county manager are generally afforded the opportunity to share announcements and comments.

“She doesn’t grandstand,” he said. “She doesn’t want to tell us in the public square just all the great things she’s doing.”

Behind the scenes, she was an integral figure in running day-to-day county operations. She said she largely focused on efforts to improve the county’s operations and efficiency, reducing red tape to more quickly connect citizens to services.

That included the addition of an ombudsman program to help the public navigate county government and rebranding county departments to raise awareness of their services.

“You always want government not to be considered a barrier,” Rich said. “If one of your loved ones is in the care of the medical examiner, you want to be sure that they’re being treated respectfully, that you can get answers about what’s happening. If you can’t pay your rent or your utility bill and you’re about to be out on the street with your family, you want to know that there’s somebody there to serve you.”

Rich also instituted a new attitude toward hiring and promotions, focusing on qualifications and track records rather than traditional civil service merit systems.

In the process, she expanded perks and benefits for the county’s employees — most recently, with merit-based raises of up to 10% last year and the coming addition of a child care center for staff who are parents.

“We want to be able to attract and promote those who are most qualified,” Rich said. “But to do that, you have to treat your employees right. If they’re not going to have those civil service protections that you hear about, you’ve got to be an employer of choice and support the employee.”

As she looks back on her legacy, Rich said she believes she had a good tenure at the county. She hopes to make up for lost time with her family, she said, staying permanently in her Phoenix-area home of 26 years but traveling to see her daughters, who are all in college.

Whoever takes over her position, she said, will have a well-trained staff and a fantastic opportunity ahead.

“Thank you for the opportunity you have given me,” Rich wrote in a characteristically short letter announcing her retirement to county supervisors. “I’m forever grateful.”

Sasha Hupka covers Maricopa County, Pinal County and regional issues for The Arizona Republic. Do you have a tip about county government or county services? Reach out to [email protected] Follow her on Twitter: @SashaHupka.