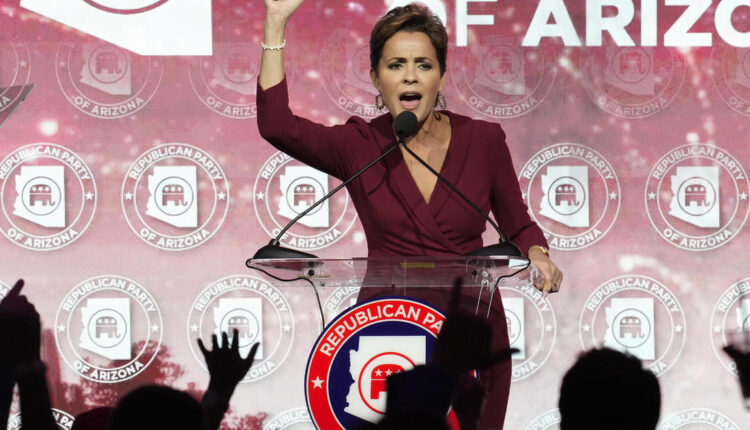 Maricopa County, Arizona, defendants in a lawsuit filed by former GOP gubernatorial candidate Kari Lake are looking to sanction Lake and her attorneys over the suit she filed challenging the integrity of the governor’s election.

The motion, which was joined by Gov.-elect Katie Hobbs, comes shortly after a judge throw out Lake’s challenge of her defeat in the governor’s race. The county wants to sanction the former TV anchor and her counsel, saying they filed a “bad-faith” lawsuit. The courts do not exist to “make political statements” and “fundraise,” or to “harass political opponents” and sow “completely unfounded doubts” about the integrity of the 2022 midterms, the motion states. The motion argues Lake owes $25,000 in attorneys’ fees.

“Enough really is enough, It is past time to end unfounded attacks on elections and unwarranted accusations against election officials,” the motion says.

Last week, Maricopa County Superior Court Judge Peter Thompson, appointed by former Republican Gov. Jan Brewer, found the court did not find clear and convincing evidence of the widespread misconduct that Lake claimed affected the outcome of the election. Lake and her attorneys particularly focused on issues with ballot printers at some polling locations in populous Maricopa County in the suit against Maricopa County officials and Hobbs, the Arizona secretary of state.

Lake, who lost to hobbs by about 17,000 votes, which was among the most vocal Republicans pushing former President Trump’s lies about the 2020 election. She continued to cast doubt on the midterms well before Election Day.

“Before a single vote was counted in the 2022 general election, Kari Lake publicly stated that she would accept the results of the gubernatorial election only if she were the winning candidate,” the motion says. “When all the votes were counted and the result of the election certified, establishing that Ms. Lake had lost the election to Defendant-Contestee Katie Hobbs, plaintiff stayed true to her promise. But she has not simply failed to publicly acknowledge the election results . Instead, she filed a groundless, 70-page election contest lawsuit against the governor-elect, the secretary of state, and Maricopa County and several of its election officials and employees, thereby dragging them and this court into this frivolous pursuit.”

Kathryn Watson is a politics reporter for CBS News Digital based in Washington, DC