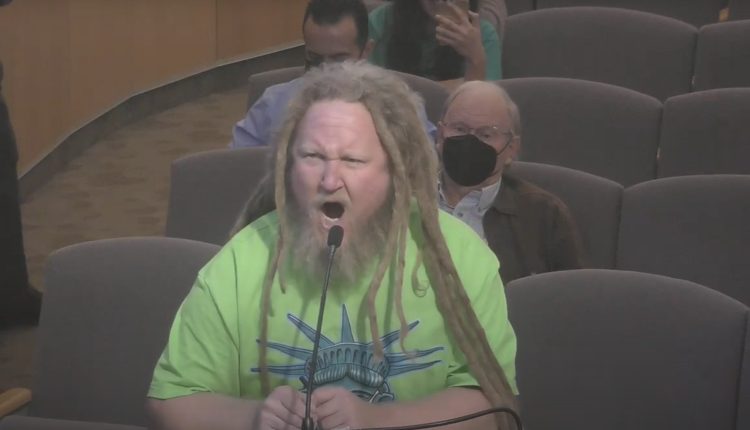 Yelling, interruptions and scathing criticisms were hurled at the Maricopa County Board of Supervisors Wednesday, during the board’s first meeting following a midterm election whose administration has been called into question locally and across the country.

Nearly two dozen spoke during the public comment portion of the Wednesday morning meeting, most of them there to speak out against the way the election was handled.

Elections in Maricopa County are administered through a joint effort between County Recorder Stephen Richer and the board of supervisors, which both support the county elections department. Richer’s office is responsible for early voting while the elections department manages Election Day voting, where there were problems with ballot printers and tabulators.

“Once again, the eyes of the world are upon Maricopa County for another botched election,” Matt Baker told the supervisors. “Am I here to accuse you of stealing the vote? Heavens, no, for that would make me a terrorist, wouldn’t it?”

Baker spoke about tabulator issues that left voters who cast their ballots in person on Election Day with the choice to either place their ballot in a box named “door 3” to be tabulated later or go to another voting site. By the end of his comments, he was screaming at the supervisors, telling them, “You are the cancer that is tearing this nation apart!”

During the Nov. 8 midterm, around 70 of Maricopa County’s 223 voting centers experienced issues with printers, meaning that some ballots could not be read by the on-site tabulators. Voters had the option of placing their completed ballots in a secured box at each site so it could be counted later at the county’s election center or canceling their ballot and going instead to another voting center.

None of the other speakers expressed their dismay as aggressively as Baker, but Supervisor Bill Gates did have to ask people in the audience to be quiet numerous times, as they clapped or cheered or attempted to speak over those they disagreed with, including some of the supervisors.

“I believe our system is safe, secure and accurate,” said Supervisor Steven Gallardo, the five-member panel’s only Democrat. “Folks have some concerns and thoughts about our elections, and those should be looked at as valid concerns. Let’s look at those and see if there are valid things that we need to change.”

Gallardo added that many changes would have to come from the state legislature, not the county.

Chris Hamlet, who ran for a school board position in Mesa and lost badly, getting only 8% of the vote, said he was at a voting center in a conservative area and that both tabulators were down in the first 30 minutes of voting. He said that most people left and he headed down the road to a more liberal area and voted in about 20 minutes.

He said he believed the printer issues were intentional, and designed to discourage voting on Election Day.

“There’s no other way to do this than to have another election, to completely scrap this,” Hamlet said. “It’s absurd to continue this charade and to think that we are going to have anything less than tainted results when you’re done.”

Some other speakers called for a completely new midterm election in Maricopa County, as well, including several poll workers or Election Day observers who witnessed issues firsthand.

There is no state law that would allow the county supervisors to scrap the Nov. 8 election results and to call for a new election.

Former Phoenix firefighter Sheila Roberts said she worked as a marshal during both the primary and general elections.

“I can tell you that 80% of those people that came to vote… voted Republican and America First candidates, because they want to protect this country and this state,” she said, adding that she didn’t believe the results of the election, where several Democratic candidates for statewide office won their races.

It was widely expected even before the election that early mail-in ballots would be more heavily Democratic, while many Republicans waited for Election Day to vote in-person.

Thomas Griner was one of a few public speakers on Wednesday that had positive things to say about last week’s election in Maricopa County.

Griner was a first-time poll worker in the midterm, and said he had a good experience, adding that those staffing the polls were all hard working and that the voters were pleasant and grateful for the poll workers’ help.

“Some of them said they came to our location because of long lines elsewhere,” Griner said, adding that he believed information the county provided on line-length at the voting locations was helpful to voters.

Supervisor Thomas Galvin thanked poll workers and observers who shared the problems they saw and experienced on Election Day, adding that all the supervisors were disappointed that any voters experienced issues.

“It’s incumbent upon us to understand exactly what happened to make sure it doesn’t happen again,” he said.

But Galvin said, he has to listen to the voices of all 1.5 million people who voted in the midterm in Maricopa County, not just the people who spoke during the meeting.

“If people have issues with how long it takes to count the votes, go to your state legislature,” Galvin said. “They’ve been sitting on their butts. They haven’t done a single thing. If you want changes in how votes are counted, then let them know.”