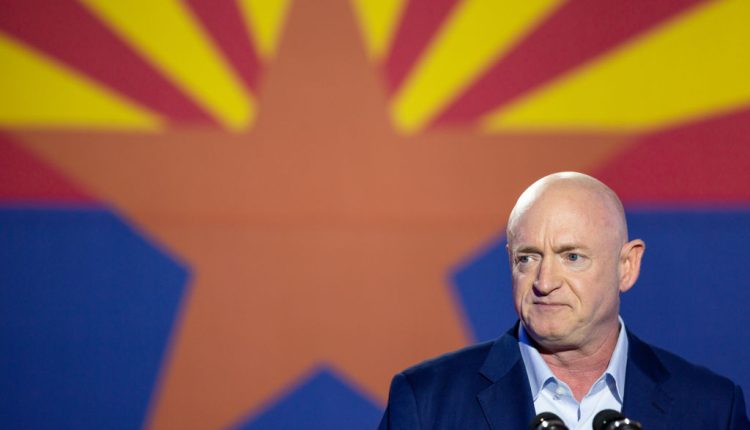 Despite predictions from Republicans that Friday’s vote tallies would favor their candidates not only didn’t come to fruition, but the opposite happened: Democrats made solid gains across the board and clinched two high-profile races.

U.S. Sen. Mark Kelly and Democratic secretary of state candidate Adrian Fontes were both declared winners by the Associated Press following the release of Friday’s vote count in Maricopa County, where some 75,000 ballots broke in Democrats’ favor.

Other Democrats made gains on their GOP opponents, strengthening their position as the ballot-counting heads into the weekend.

Katie Hobbs, the Democratic candidate for governor, padded her lead over Kari Lake by more than 4,000 votes, and it sits now at 31,097.

Attorney general nominee Kris Mayes expanded her slim lead over Republican Abe Hamadeh to 19,151, a gain of about 2,700 from a day earlier. And Superintendent of Public Instruction Kathy Hoffman bolstered her reelection bid by more than 2,800 votes over GOP challenger Tom Horne; her lead now sits at 6,665.

In those races, the results are far from final with about 394,000 ballots in Arizona left to be counted, including some 275,000 uncounted ballots in Maricopa County. Republicans have said for several days that they believe the remaining ballots will more closely resemble in-person Election Day results — which they dominated nearly two-to-one — than the early ballots that were received before this week, which largely favored Democrats.

Friday’s batch in Maricopa County was the first to test that theory. The ballots included 12,000 that couldn’t be scanned on Election Day at polling locations because of problems with the on-site printers — which almost certainly heavily favored GOP candidates — and early ballots that were delivered Monday or dropped off Tuesday at voting centers.

But while Friday’s tallies were good news for Democrats, election data analysts say that upcoming batches of ballots appear likely to be Republican-friendly. As early ballots are verified in Maricopa County, but before they are actually counted, they are added to the county’s early vote map.

That map lets observers see the party breakdown for early voters in congressional and legislative districts. Data analyst Jamal James has been tracking changes to the maps, and he noted Friday afternoon that more than 114,00 verified by uncounted ballots were added to that map, and a plurality of those were from Republican voters.

New maps. This is very favorable to Lake. pic.twitter.com/opCAnI8N3I

According to James’ analysis, nearly 47% of those soon-to-be-counted ballots came from GOP voters, compared to just 24% from Democrats. Another nearly 29% were from voters registered to no political party or a third party.

Kelly and Fontes projected to win

Kelly’s victory over Republican Blake Masters marks the third consecutive U.S. Senate campaign that Democrats have won in Arizona, which was once a reliably Republican state. Kelly was first elected in 2020 to fill out the remainder of the term that John McCain won in 2016. In 2018, Kyrsten Sinema defeated Republican Martha McSally to become the first Democrat in decades to represent Arizona in the Senate.

Democrats and their allies celebrated Kelly’s election to a full term.

“Arizonans decisively rejected Trump’s handpicked candidate because they saw him for what he truly is—an election denier who wants to override the will of voters and an extremist who supports a nationwide abortion ban,” said JB Poersch, the president of Senate Majority PAC, the political arm of U.S. Senate Democrats.

“Arizona voters stood with Mark because he cuts through the political noise, solves problems and delivers results, no matter how difficult the mission,” said Gary Peters, the chairman of the Democratic Senatorial Campaign Committee. “Arizona’s working families, and our country, will continue to be better off with Mark’s independent voice in the Senate.”

And Fontes, the projected winner of the secretary of state race, pledged to work to unite Arizonans.

“The America of tomorrow can be a place where being an American is more important than your political party,” he said. “We must embrace dignity for our fellow human beings and work to become Americans who respect our neighbors, regardless of how they vote.

“I promise to always honor and defend the ideal of fair and honest elections with the voters of Arizona and I will help reignite the flame of unity in our Republic.”

Fontes defeated Mark Finchem, a Republican state senator who built a national political following as one of the nation’s most vocal supporters of former President Donald Trump’s lies about the 2020 election.

While ballot counting will continue through the weekend, Republicans on Friday threatened to sue Maricopa County unless it began working 24 hours a day to tally the ballots.

“The RNC and the Republican Party of Arizona demand that around-the-clock shifts of ballot processing be pressed into service until all votes have been counted, accompanied by complete transparency and regular, accurate public updates,” said Harmeet Dhillon, an attorney for the Republican National Committee, the Arizona Republican Party and Lake’s campaign. “We will not hesitate to take legal action if necessary to protect Arizona voters’ right to have their ballots counted.”

Dhillon said the delays in counting ballots is a blow to public confidence because it isn’t transparent or efficient.

But Bill Gates, the Republican chairman of the Maricopa County Board of Supervisors, said the GOP complaints are the latest in “an incoming tide of disinformation designed to place blame on public servants and election officials” for following long-established election laws and procedures.

“The criticism from the Republican National Committee and Republican Party of Arizona is one more political stunt to try and distract us. This will not happen,” he said in a written statement, noting that the county has averaged 12.5 days since 2006 to post final results. “Changing processes or adding untrained personnel would only slow the counting at this point and we will not deny the voters of Maricopa County an accurate tabulation of their votes.”