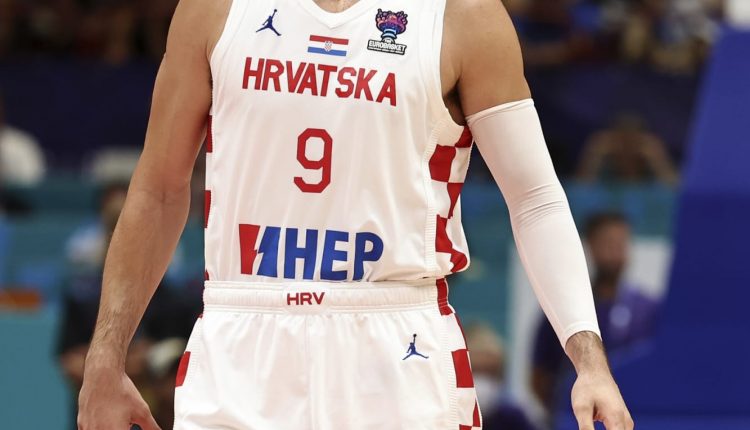 MILAN, ITALY – SEPTEMBER 02: Dario Saric #9 of Croatia looks on during the FIBA ​​EuroBasket 2022 group C match between Croatia and Greece at Mediolanum Forum on September 02, 2022 in Milan, Italy. (Photo by Giuseppe Cottini/Getty Images)

Phoenix Suns’ Dario Saric came to play in Croatia’s round of 16 clash against Finland, however his national team was perilous to stop Lauri Markkanen in a stunning 43-point masterclass.

Croatia would have been confident in advancing to the final eight, but their elimination now allows Saric to turn his attention to an NBA return with the Suns.

Saric finished with 12 points on 4-for-9 shooting, also recording nine rebounds and six steals in a promising performance. He also posted the second highest efficiency rating of any Croatian player.

The game was a hard-fought tight contest throughout – Croatia led by one at the end of the first, before Finland led by two at the half and maintained that lead heading into the fourth.

The game was then tied with less than five minutes remaining, before Finland made the crucial plays down the stretch in a 17-7 run. Markkanen was the orchestrator of everything throughout the game, but he did get some timely help from his teammates to close things out.

Utah Jazz fans would have been impressed with Markannen’s display, with the 25-year-old having recently been involved in the deal that sent Donovan Mitchell to the Cleveland Cavaliers. His 43 points came on 19-for-29 shooting,

Croatia’s turnover issues came back to bite them in the end, recording six more in a theme that had become concerning at times throughout the tournament. Finland also had six more offensive rebounds which, in combination with the turnovers, gave them a game-defining 21 more field-goal attempts.

While the loss will sting Saric and his teammates, it does give him a little more time to prepare for training camp ahead of what shapes as a career-defining season.