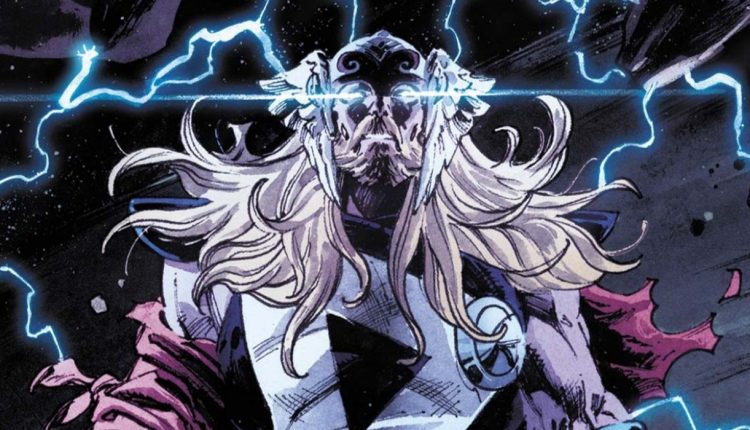 The following contains spoilers for The Avengers: 1,000,000 BC, on sale now from Marvel Comics.

Written by Jason Aaron with art by Kev Walker, the issue answers the question of whom the God of Thunder’s birth mother is. Though Odin’s wife Freya raised him, Gaea aka Mother Earth has been known to be the true birth mother of Thor since the revelation in 1980’s Thor #300. However, Avengers #42 (2021) cast doubt on Thor’s known ancestry when the Phoenix told the hero that she was his actual mother. To put the question’s answer simply, while his father is Odin, Thor hath two mothers: both Gaea and the Phoenix.

The Avengers: 1,000,000 BC revisits the night Thor was born, with thunder booming and lightning flooding the sky as Gaea gives birth to the baby god. The Prehistoric Avengers — Agamotto, Iron Fist, Ghost Rider, Starbrand and Odin — arrive in time for the delivery, but the joyous occasion is cut short when the Frost Giant King Rundey and his allies attack. Rundey manages to nick the newborn Thor with his blade, turning the child to ice before the Phoenix arrives.

After Gaea begs for her help, the Phoenix takes Thor and flies him into the night sky, burning with a colossal amount of flame that “breathed the fires of life back into the child,” according to the issue. The one-shot acknowledges that Thor has three parents, specifically “the Goddess of Midgard and the All-Father of Asgard… and a firebird from beyond the stars.” While Gaea and the Phoenix are shown to behave as friends in the issue, Odin is seen being rejected by the Phoenix many years prior to Thor’s birth, prompting him to advise and turn her away after she saves the life of his son.

RELATED: Thor vs Superman: Who Would Win in a Fight?

After adding on to Thor’s history with his Avengers run, Aaron’s time writing the title will be coming to an end with the debut of the one-shot Avengers Assemble: Alpha #1. Announced during San Diego Comic-Con 2022 and illustrated by Bryan Hitch, the book will unite the main Avengers, the Avengers of 1,000,000 BC and the heroes of Aaron’s Avengers Forever series for “a battle beyond all imaging.” The issue is slated to release in late Nov. 2022.

The Avengers: 1,000,000 BC #1 is written by Aaron with art by Kev Walker, colors by Dean White and letters by VC’s Cory Petit. Main cover art for the issue is done by Ed McGuiness and Matthew Wilson, with variant covers contributed to by Alex Horley, Ryan Stegman, JP Mayer, Jason Keith and Skottie Young. The issue is now on sale from Marvel Comics.