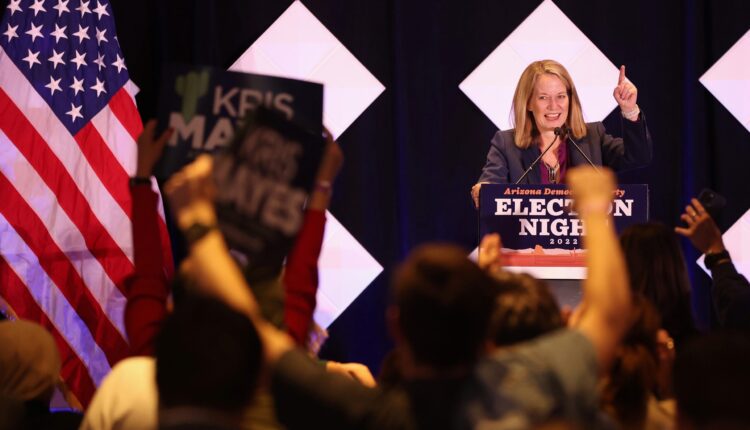 Mayes’ attorney slams Hamadeh’s election challenge as speculation, says it should be dismissed

A lawsuit from Abraham Hamadeh seeking to overturn the election he lost should be thrown out of court for its complete lack of evidence, attorneys for his opponent say.

Hamadeh, the Republican nominee for attorney general, challenged his 511-vote loss last week, alleging that election misconduct across the state cost him a victory. Dan Barr, representing Kris Mayes, the Democratic attorney general-elect, argued in a motion to dismiss that Hamadeh’s suit was long on speculation but short on proof.

“As the party seeking extraordinary relief to overturn an election, it’s (they) who bear the burden to come forward with ‘well-pleaded facts’ showing that they have a right to that,” Barr wrote. “One looks in vain for any such facts.”

Specificity is critical for election challenges, Barr added, because the law is clear about what can be resolved by a court and when. Debates can’t afford to drag on, because the law strictly directs trials to be held no more than 15 days after the election is certified.

Hamadeh’s lawsuit, which was filed in conservative Mohave County, alleges that a combination of thwarted votes for him and illegal votes for Mayes influenced the outcome of the race. To support this claim, he points to issues in Maricopa County on Election Day, as well as the treatment and ultimate counting — or not counting — of ballots by election officials across the state.

Around 70 of the 223 polling places in Maricopa County experienced setbacks due to on-demand printers producing ballots that were too light for on-site tabulators to read. Voters were given the option to deposit their ballots in a separate drawer, nicknamed “door 3,” for later tabulation, or check out of the polling site and travel to another site to cast their ballots.

Hamadeh’s suit argued that poll worker error – namely, the failure to check voters out which later led to rejected ballots as they were logged in the system as having already voted — effectively disenfranchised hundreds of voters.

But, Barr said, this argument fails to establish that intentional misconduct actually occurred and it wasn’t just simple, honest human error. It also doesn’t show that those votes would have counted towards Hamadeh’s campaign in numbers significant enough to dispute Mayes’ win. To merit an overturned election in his favor, Hamadeh must prove both points, Barr argued.

The lawsuit also claims that incorrectly duplicated and adjudicated ballots resulted in votes that were out of line with the voter’s choices. Duplication to preserve the voter’s original intent occurs when a ballot is damaged and can’t be counted by tabulation machines, while adjudication is the process by which a panel of election officials determine that intent when the ballot is too illegible to be read by the machines.

Barr’s response notes that Hamadeh didn’t provide adequate proof that either of the two types of processes resulted in incorrectly cast votes in this year’s midterm elections. Instead, a Maricopa County error rate statistic from the 2020 election was offered to argue that duplicated ballots in the 2022 midterm may have faced equivalent issues.

And to support the claim that ballots were mis-adjudicated, the lawsuit uses the Maricopa County hand-count audit for the governor’s race, which found one instance in which a ballot was erroneously adjudicated. From this one error, the lawsuit concludes that issues could have occurred in the attorney general race.

As the party seeking extraordinary relief to overturn an election, it’s (they) who bear the burden to come forward with ‘well-pleaded facts’ showing that they have a right to that. One looks in vain for any such facts.

Mayes garnered illegal votes, Hamadeh’s lawsuit contends, because election officials accepted early ballots that should have been rejected during signature verification. Election officials compare the signatures on early ballot affidavits to the signatures in a voter’s registration record, or ballots from previous years, but Hamadeh claims using any other record besides a voter registration form is illegal.

State law, in fact, does allow for the use of other election documents to verify voter signatures.

Figuring out which ballots would be unlawful under Hamadeh’s definition would be virtually impossible, Barr said. Once an early ballot is verified and removed from its green envelope, there’s no way to re-link the two. Besides that, the argument as a whole is moot, Barr argues, because state law requires that objections to election procedures must be brought before the election itself is conducted.

Notably, the Election Procedures Manual, which governs how elections are run, including what documents can be used to verify signatures on early ballots, has been around long enough that if this was a real concern it should have been voiced much earlier, Barr added.

“The (Election Procedures Manual) was approved three years ago; until now, Plaintiffs have said nothing,” he wrote.

The complaints outlined in Hamadeh’s suit are unsubstantiated and, due to the laws governing what an election challenge must look like, not eligible for consideration by a court, according to Barr. The only avenue left open to the court, then, is to reject Hamadeh’s challenge and confirm Mayes’ win.

The alternative — to allow the lawsuit to move forward — could create a dangerous precedent for future election challenges.

“Permitting only threadbare allegations and speculation would transform election contests into fishing expeditions that cannot be concluded in 15 days,” Barr warned.

Mohave Superior Court Judge Lee F. Jantzen has set a tentative hearing for oral arguments from both parties on Dec. 19.