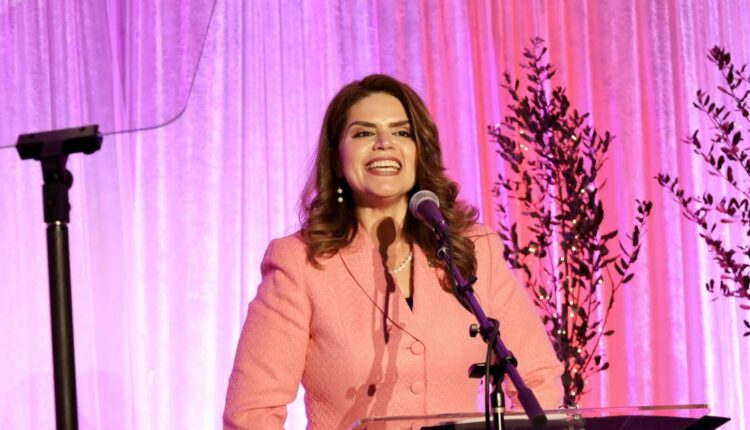 Tucson Mayor Regina Romero delivered her vision for Tucson as an equitable, sustainable and thriving desert city during her 2022 State of the City on Dec. 1. Ahead of her third address, she announced her candidacy for re-election in the city’s 2023 election.

The mayor recalled her first 100 days in office in 2019, during the early stages of the pandemic, and addressed global supply chain issues, shortages and inflation, stating that federal funding made available through the American Rescue Plan has been transformative to Tucson, citing $136 million in aid.

Romero — whose tenure in public service includes experience in administering neighborhood reinvestment programs with Pima County, 12 years on the city council working on economic development initiatives and her past three years as mayor — said her top initiative has been supporting public safety while striving to redefine what community safety, health and wellness means to constituents.

Public safety will receive $90 million over the course of five years for fleet replacement, capital improvements, equipment and more, Romero said. An independent oversight and accountability commission oversees the expenditure of revenues.

After Tucson voters passed Proposition 411, residents will see the $740 million investment toward infrastructure over the next 10 years, including $15 million allotted for “collector” streets, Romero said.

The Tucson Police Department was also selected by the department of justice to participate in the National Public Safety Program, to collaborate and implement evidence-based decision making to ensure that local resources are maximized and that federal assets are leveraged where they are needed most. The department was also provided with funding for over 100 positions.

Romero highlighted the hiring of Sharon McDonough as the city’s public safety communications director, noting her experience to help stabilize the 911 Communications Department and work with the public safety leadership team, and Sarah Launius, the city’s first community safety, health and wellness program manager, to operationalize the 311 system, a nonemergency service line.

“Our innovative programming through our Community Safety, Health and Wellness program is building bridges from Tucson Fire’s TC-3 program and TPD’s Mental Health Support Team to ensure that our city improves the outcomes for individuals struggling with mental health, substance use, homelessness or extreme poverty,” Romero said.

The city has added care coordinators and navigators who are broadening access to resources that address underlying issues that lead to reliance on emergency services, while working directly with marginalized individuals and communities.

“We are building the bridge to connect people to resources,” Romero said. In two months, the city and county were able to allow 29 families and individuals who were at risk of eviction or homelessness, to be or remain housed as well as connecting 300 individuals to services such as detox.

“The city of Tucson was a successful partner in distributing $53 million in Federal Rental Assistance Funds to support more than 9,800 households in Tucson and South Tucson,” Romero said. An additional $10 million was used to convert vacant hotels into transitional and low-barrier housing for those experiencing homelessness, including a partnership with the Arizona Department of Housing, which will implement $2.1 million in tax credits to build The Milagro, an adaptive complex that will bring 63 units of affordable housing to the Grant and Oracle area.

About 31,000 older adult households are housing-cost burdened, Romero said, paying over 30% or more of their income on housing. The Public Housing Authority assists over 5,300 households with rental assistance through the Housing Choice Voucher Program and over 1,500 public housing units. The city and county have also developed a task force to address homelessness and the Homeless Encampment Reporting Tool to report precise information to direct outreach and cleanup efforts.

This past year, the mayor and council delivered a wage increase to all city workers, including a 13% increase worth $14.9 million to Tucson Police Department and an additional average of 7% worth $10.4 million.

After establishing the Office of Equity in 2020 to combat racial and socioeconomic inequities throughout the city, Chief Equity Officer Laurice Walker has implemented tools to help assess budget decisions on marginalized populations.

Romero announced the Transform Tucson Fund, a strategy to invest in green jobs, infrastructure for a climate-adapted city in partnership with the city of Tucson Industrial Development. The fund calls for an extra $1.5 million for the AVANZA Revolving Loan Fund for Under-Represented Entrepreneurs, the co-locating the city of Tucson Small Business Program and the city of Tucson IDA to a singular incubation center and $1.5 million to the Essential Worker’s Mortgage Assistance fund in public-private partnership with the Tucson Association of Realtors and the IDA.

“Every single Tucsonan deserves a city that holds its resources dear and takes actions today to build our climate resilient future,” Romero said. Under her leadership, the city has taken decisive action to leave 26,000 acre feet of water in Lake Mead, with the commitment to do so again in three years.

The mayor and council have taken into consideration about 1,000 in-person and 4,000 online surveys to help draft the climate action plan, Tucson Resilient Together, which will be available for public review early 2023 before council votes.

“A climate action plan such as ours positions Tucson strategically to compete for federal dollars,” Romero said.