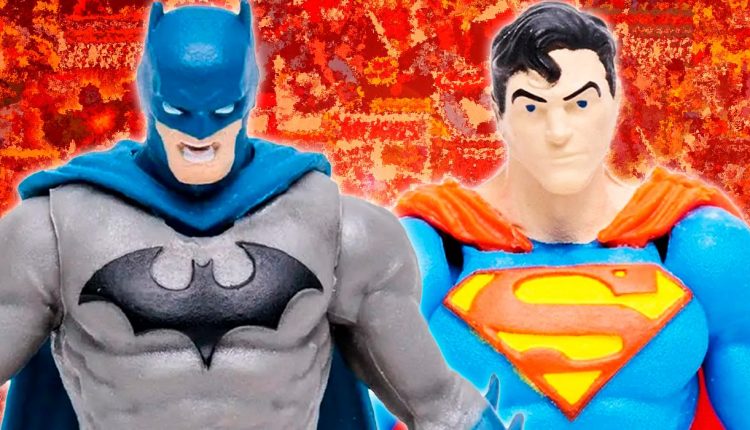 Todd McFarlane is known for revolutionizing two industries: comic books and toys. Spawning an immeasurable legacy by co-founding Image Comics, the writer and artist went on to form McFarlane Toys. Known for extreme detail and collectability, these figures helped put the creator on the map. Having recently begun using his company as an outlet for DC Comics, McFarlane is now launching an idea that could reach the next generation of comic book readers.

“Page Punchers” are a new line of McFarlane figures based on characters from DC Comics. From Superman and Batman to the anti-hero Black Adam, these toys come packaged with comics in a bid to get kids hooked on both. This recalls the history of comics, and could also potentially save them.

What Are McFarlane Toys’ Page Punchers?

DC Direct Page Punchers are 3″ or 7″ action figures of various DC Comics characters. Sold for $9.99, these are essentially two products in one. Not only do buyers get a cool action figure representing their favorite character, but they also get a corresponding comic book to jump into the story of said character. These comics are from different eras, with the look and book typically being one that’s either classic or recent for the character. For instance, the Batman Page Punchers figure includes the first issue of the Batman: Hush storyline, while the Superman figure is Rebirth Superman, containing the first issue from that era. The Flash is based off of his incarnation from the popular Flashpoint storyline, and is packaged with the first issue. The Black Adam figure has the most recent comic, being packaged with Black Adam: Endless Winter #1.

This recalls an older era for comic books, whereby they were sold in stores close to toys. This way, a kid could pick up the character’s latest issue while hopefully finding that same character in plastic form on the toy shelves. Eventually, comics began being sectioned off in the books/magazines section of stores before finally leaving most retailers entirely. This lack of physical accessibility has contributed to the death of the industry, especially regarding the involvement of children. However, page punchers could easily change this.

The toys themselves are designed with kids in mind, which is further reflected in the price point. A total of $10 for a comic other a toy is a pretty decent deal for parents, especially as an impulse buy. Likewise, this first wave of figures represents three popular DC heroes, as well as a character who is soon to be portrayed by The Rock in a big budget movie. The price point and detail are smaller than the typical offerings of McFarlane Toys, while still being more detailed than other DC figures. This all goes a long way in making sure that kids actually get the products and the comics inside.

By having both the action figure and a comic that “talks” about the action figure, children will hopefully become interested in the character and want to learn more about them. This will help them see that these characters are in more than just movies or cartoons, leading to them potentially seeking them out in monthly comic book form. It’s somewhat similar to the pack-in comics that used to come in cereal or other snacks, though these are official DC books, making them more “legitimate.”

The biggest way that this idea could flop, however, would be to not keep adding new waves as quickly as possible. This way, kids can “learn about new action figures” once they’ve experienced the other ones, keeping them interested in the DC Universe as a whole. These should not only be big name characters like Superman, Batman and the Justice League, but also less mainstream characters like Swamp Thing and especially Blue Beetle, given his upcoming film. If DC and McFarlane Toys play this right, they could just create a generation hungry for comic book content, especially if they associate it with the fun and creativity of a toy.

Timothy Blake Donohoo is a graduate of the University of Tennessee at Chattanooga, where he majored in Communication and minored in Creative Writing. A professional freelance writer and marketing expert, he’s written marketing copy and retail listings for companies such as Viatek. In his spare time, he enjoys reading, playing video games, watching documentaries and catching up on the latest Vaporwave and Electro-Swing musical releases.