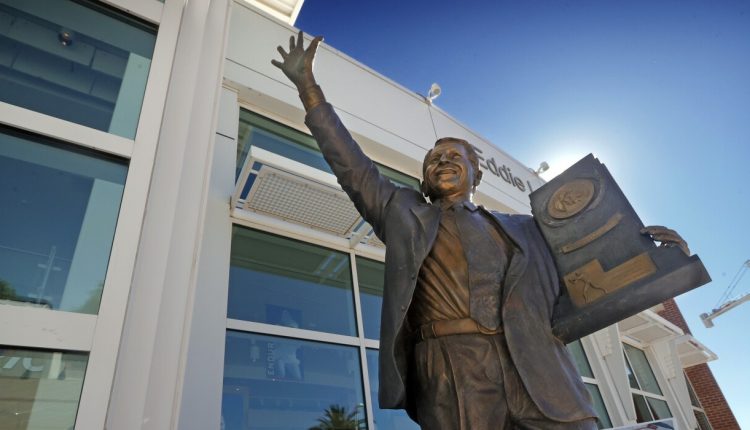 TUCSON, Ariz. — Arizona Stadium and the football team’s indoor practice facility are located on the east end of the University of Arizona campus. Friday afternoon the Pride of Arizona, the school’s marching band, was practicing inside the stadium in 97-degree heat under the desert sun.

One block north is the McKale Center, the 14,500-seat basketball arena that is the pride of Tucson. On the north end is an elevated plaza, which gives a perfect view of the beautiful Santa Catalina Mountains that rise in the distance.

On this plaza, near the main entrance to the arena, stands a statue of Lute Olson.

North Dakotans know of Lute Olson. He was a proud son of Mayville, ND, who turned into a big-time college men’s basketball coach. He got his start at Long Beach College in California before building the University of Iowa into a Big Ten contender.

Lute fled the frozen cornfields of Iowa for the Sonoran desert in 1983.

Good move for Lute. This metro area of ​​over a million people is located on a flat plain surrounded by five minor ranges of mountains within sight of the city. It is sunny and wonderful, if not filled with the beautiful people and buildings of the Phoenix-Scottsdale metro to the north. Tucson is blue-collar, less stuffy, less wealthy.

The statue of Olson depicts the great coach holding the national championship trophy won by the Wildcats in 1997 under his tutelage. There is a sign behind the statue listing Olson’s accomplishments in Tucson.

Lute turned the Wildcats into one of the elite programs in college basketball, for a long stretch on par with North Carolina, Kansas and Duke. Arizona won an NCAA championship in 1997, was runner-up in 2001 and made four Final Fours from 1998-2001. He retired in 2007 and died at 85 in 2020.

The Arizona Wildcats marching band practices in the heat at Arizona Stadium in Tucson, Arizona, on Friday, Sept. 16, 2022.

One mile away on the opposite side of campus at the corner of University Drive and Euclid Avenue is the college bar area of ​​the university. On Friday afternoon, there were several radio stations doing live broadcasts as hundreds of fans in green and yellow North Dakota State T-shirts mixed with college students and Arizona fans, stopping at bars for a beer or restaurants for a bite to eat.

Set up outside Gentle Ben’s Brewing on University was the “Spears and Ali” show on ESPN Tucson, the afternoon drive sports-talk program. They were talking about Saturday’s NDSU-Arizona football game, set for an 8 pm local time kickoff. The music along University was blaring, misting machines were keeping bar patrons cool and there was a vibe of college football in the air, even if the crisp fall air was absent.

After spending a few minutes chatting with the hosts, Justin Spears and Ali Farhangis, about the game, I asked them a question during a commercial break.

Is Tucson a football town or a basketball town?

So Fisch can blame Olson for his challenge in trying to build the Wildcats football program into something with staying power. Football is the clear second fiddle. Championship banners line the street outside of Arizona Stadium in Tucson, Arizona, on Friday, Sept. 16, 2022.

Football had its rise in the 1990s under coach Dick Tomey, who came up with the “Desert Swarm” defense. His 1998 team went 12-1 and finished fourth in the final Associated Press poll, the highest in program history.

John Mackovic followed and was a disaster. Mike Stoops came next and was competent, with a handful of lower bowl berths. Rich Rodriguez succeeded in stoops and won more than he lost, including a 10-win season, but left under the cloud of a sexual harassment investigation.

Since then … uff there, as the many North Dakota and Minnesota transplants in the desert would say. Kevin Sumlin was hired in 2018 and lasted just three seasons.

Fisch took over a beyond-moribund program prior to the 2021 season after Sumlin was fired. The Wildcats went 1-11 in Fisch’s first year, losing even to mediocre Football Championship Subdivision outfit Northern Arizona.

Fisch appears to be as much a salesman as a football coach, trying to market his program to the masses and build a fan base.

Fisch has spent time during each of his last three media sessions praising fans, the tailgating scene outside Arizona Stadium and the atmosphere inside the stadium during Arizona’s home opener, a 39-17 loss to Mississippi State. 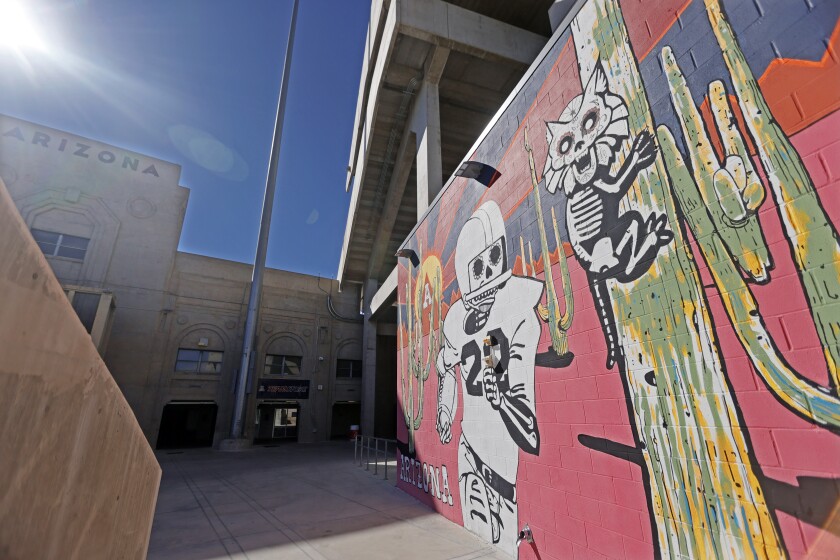 A mural by local artist Danny Martin adorns one of the walls inside of Arizona Stadium in Tucson, Arizona.

“Seemed pretty cool. I noticed the lights looked pretty awesome. It sounded like the fans got into it,” Fisch said Thursday. “The best tradition I saw was that they were all still there. … You could see how the energy was turning. When it was 25-17 and we got that defensive stop, that place was loud, and I thank our fans for that.

“If they can do that for six more weeks in a row, we can have a pretty awesome game day experience and build Arizona Stadium into a place that nobody wants to play.”

The stadium seats 57,400. In seven home games a year ago, the Wildcats averaged 37,705 fans. Over its final three home games, when the season was clearly a hopeless cause, the average dropped to 31,185.

The game against Mississippi State, a rare visit to the West by a Southeastern Conference team, drew a fine and engaged crowd of 46,275. It’s likely the Bison game will draw in the neighborhood of 40,000, boosted by a solid contingent wearing green and yellow.

It is a game for which Bison fans have waited six years. There could be as many as 10,000 at Arizona Stadium on Saturday.

Wildcats fans won’t be quite so enthusiastic. They are waiting and watching Fisch to see how legitimate the program is. A loss to NDSU would be viewed as a deep dent in that legitimacy.

And with Arizona’s basketball team playing an exhibition game Nov. 1 at the McKale Center, the time to be relevant in this town is already running short.