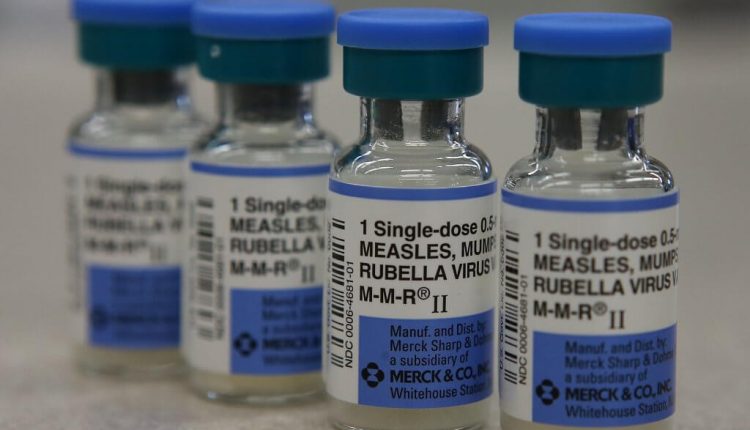 The Maricopa County Department of Public Health recently announced three measles cases in the county as the state has continued to see year-over-year drops in how many children are being vaccinated against the highly contagious viral infection.

Measles has no specific treatment once a person becomes infected, and it is estimated that measles vaccinations resulted in a worldwide 73% reduction in deaths between 2000 to 2018, according to the World Health Organization.

The vaccine is administered to children. In Arizona, the vaccination rates among children have been dropping every year. In some parts of the state, the number of schools with herd immunity has reached single digits.

In Maricopa County, for example, there are 876 childcare or preschool facilities. Just 517 of them — not quite 60% — meet the 95% threshold that protects children in attendance from a severe outbreak.

Other counties are far less protected.

In Yavapai County, only 20% of  preschool or childcare facilities are protected. The figures are even worse at elementary schools: Just 14% of kindergartens and 17% of 6th grade classrooms have community immunity. A similar trend is seen in Mohave and Gila counties.

Harrington said educating parents through their pediatricians and family physicians on the dangers of diseases easily prevented via childhood vaccinations is the agency’s top goal.

“We want to talk to them about the ramifications of not getting their kids vaccinated, because they are especially susceptible,” Harrington said, noting that children infected with measles are prone to deafness and even death.

“It’s about as contagious as some of these new versions of the omicron variant,” Humble said of measles. “It can float around in the air for two hours.”

In total, counties like Yavapai have a coverage rate of 74% among children. Statewide, that figure is 91% — high, but below the community immunity standard. The vaccination for measles in Arizona is not mandatory and Arizona has allows parents to easily opt out of vaccinating their children.

A 2019 study listed Maricopa County as one of the most susceptible in the country for a measles outbreak. The team of researchers correctly predicted where a 2015 Zika outbreak would occur and ranked Maricopa No. 6 on its list.

For health care providers in Arizona, attempting to increase vaccination rates is a challenging task.

Harrington said he is concerned that parents may be conflating the flu vaccine with the MMR vaccine, creating hesitancy to get their children vaccinated. The flu vaccine can have an effective rating between 40 to 60%, leading some who got the shot to still get infected, though they typically experience milder symptoms than those who aren’t vaccinated.

However, the MMR vaccine gives immunity of 93% on the first dose and 97% on the second. It has been in use since the early 1970s.

“It is an amazingly safe and effective vaccine,” Harrington said. “Hitting 97% effectiveness, that is amazing.”

Within the first 20 years of the vaccine being licensed in the United States, it is estimated that it prevented approximately 52 million cases of measles and approximately 5,200 deaths.

“That is the insidious and really difficult part of all this, there are just no easy answers,” Humble said, adding that one of the biggest components is starting with parental education at the “clinical level.”

“Both the decline in vaccination rates during the COVID-19 pandemic and the current cases of measles in unvaccinated individuals highlight the importance of being vaccinated,” Dr. Nick Staab, medical epidemiologist at the Maricopa County Department of Public Health, said to the Mirror.

Staab said that the MCDPH is working alongside the Arizona Department of Health Services and The Arizona Partnership for Immunization to try to reach parents and healthcare providers to remind parents to keep their children up to date on all their vaccinations, including measles.
“In addition to providing childhood vaccinations at our immunization clinics and mobile outreach events, MCDPH is working with ADHS, TAPI and community partners to increase awareness of declining vaccination rates and to expand the number of locations where children can be vaccinated in Maricopa County,” he said.

In December 2014, in California, a measles outbreak started in Disneyland that eventually spread to seven states, including Arizona, and ended in mid-April 2015. Approximately 131 Californians were infected and almost all the cases were in unvaccinated individuals. Twelve of the cases were in infants too young to get the vaccine who must rely on herd immunity to stay safe.

It led the state legislature to pass a law revoking California’s personal belief exemption, as California had some areas where vaccination rates were well below 60%. Now nearly all counties in the state are at 95%.

“It leads me to the silver bullet, which is the interventions that work, which is to get rid of the personal exemption,” Humble said. “You can either get rid of the tree with a chainsaw or hit it with a dull ax.”

Humble said medical exemptions need to be allowed, but narrowly crafted to ensure it isn’t abused by anti-vaccination parents, as happened in California after the personal belief exemption was abolished, something that after California’s personal exemption law was revoked.

But the current Arizona legislature has the “appetite” to do such a thing, Humble acknowledged. Arizona’s legislature just this year considered  a number of anti-vaccine related bills. The only thing that might change that, he said, is if “we had a bad enough outbreak” in the state.

Harrington wouldn’t say if ADHS supported removing the personal belief exemption in Arizona as an avenue to increasing vaccination rates.

“That’s the policy road,” he said, adding that his agency is focused on education. “Making laws for policy, that is out of our hands.”