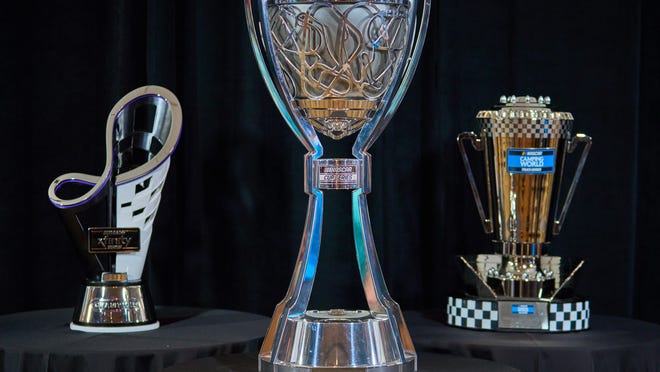 NASCAR’s Cup Series championship is gearing up for a Wild West shootout Sunday at Phoenix Raceway, emphasizing on “wild” with how this season has played out.

Gone are the days of veteran heavyweights like Denny Hamlin and Kevin Harvick being mainstays in the title race. The Championship 4 is loaded with more diverse, ultra-talented and personality-driven contenders than ever before, thanks in part to the Next Gen car that promotes parity.

Here’s a look at the four drivers who will race for the Bill France Cup, including two former champions and a pair of first-time title contenders

Watermelon man: By now, everyone should know Chastain’s backstory as an eighth-generation watermelon farmer turned stock car driver who has been racing in NASCAR since 2011. Chastain will forever be immortalized for executing a once-in-a-lifetime video game move at Martinsville to secure a spot in the Championship 4, but there’s so much more to 29-year-old than people realize. He has made it to this point by scratching and clawing his way through the developmental series ranks. After many runs in subpar equipment, Chastain has found a home in Trackhouse Racing, co-owned by Justin Marks and global sensation Pitbull.

Reputation: Chastain could have a reputation as one of the sport’s villains, given his multitude of on-track run-ins, but that’s part of why people love the guy. He’s unapologetically himself and is not afraid to do whatever it takes to win, which is what makes him such an exciting presence in the Championship 4.

He said it: “I’m just a guy who wants to compete,” said Chastain, who finished second in the Phoenix spring race and his six top-10 finishes in the playoffs leads the four finalists. “I will do whatever I can do to win. That’s what this is all about; this race is only about those other three guys and being the best of four. I’m not preparing to go around the wall, I’m not looking for a petty, wild move — I just want to go beat them, and we have the team and the car capable of doing that. That’s just incredible that we’ve got that potential, but we’re not looking for any fluke way to do it. We just want to go beat them.”

Class of the field: He locked up the regular-season championship with a series-best five wins, 20 top-10s, 857 laps led and a 12th-place average. He also knows what it takes to win a title in Phoenix, having captured the Cup there in 2020. Elliott and his team was typically strong in the spring race, and he’s always run great at the one-mile oval with eight top-10s to his credit.

Playoff enigma: Elliott has been hard to read in the playoffs, scoring one top-10 in each of the three-race rounds, albeit one in the form of a win at Talladega, with the worst average finish of the Championship 4 contenders at 16.3.

He said it: “Our strengths are just our entire team,” NASCAR’s four-time Most Popular Driver said. “The amount of effort they’re willing to put in and the late nights and things that they’ve done throughout this year to be good as a group, I think is really impressive. It’s about them. They have always made me look better than I really am and I appreciate their efforts in wanting to try and make me better. I just hope I can be half as good as the people around me; we’ll be just fine.”

The closer: Following two, gutsy walk-off victories in the playoffs to qualify for the Championship 4, the 27-year-old is making a strong case as NASCAR’s new “closer” with a trio of come-from-behind victories this season.

New blood for Gibbs: Bell’s breakout season could not come at a better time for Joe Gibbs Racing, which is losing Kyle Busch at the end of the year, leaving only two veterans in the waning stages of their careers and an expecting incoming rookie with a lot of maturing to do as their lineup for 2023 — Ty Gibbs, who is in the Xfinity final four this weekend.

He said it: “I don’t think it’s sank in yet. One thing that is very unique about the playoff system and the wins that we have had, you know, at least for me, I don’t feel like I’ve won a Cup race yet. I feel like I transferred into the playoffs and get to race for a championship. In a way the playoffs overshadow the race wins. Whenever you have a race win in the regular season, it’s cherished and you feel like it’s a big deal, where winning a race in the playoffs, especially the way that we did, it’s like, wow, we won three races this year.”

Veteran Savvy: If there’s one driver with a clear-cut advantage in the Championship 4, it’s Logano, whose trademark smile should be permanently leading up to the green flag of the series finale. Logan, 32, brings a boatload of experience in every sense of the word. Not only is he a former champion, this is his ninth postseason appearance and fifth time in the Championship 4.

Local knowledge: Logano’s 2 wins in 27 starts at Phoenix are by far the most among drivers vying for the title, but he also has the most recent success. Over the last seven races at the one-mile track, Logano has led six top-10s and 425 laps, which includes a win in 2020. Where the real advantage comes into play for Logano is his win at Las Vegas Motor Speedway in the opening race in the Round of 8. This victory enabled him and his team to focus all of their assets on preparing their car for Phoenix, whereas Bell, Chastain and Elliott were left with an uncertain outlook until last weekend at Martinsville.

He said it: “I’m telling you, it’s bigger than ever because the race is in Phoenix and it takes a long time for the truck to get there. When you get done in Martinsville, you only have three days to focus to get your car ready when that truck has to leave Wednesday afternoon. That’s pretty tricky for everyone when you think about the drivers doing media and you don’t have much time to prepare with your team. Having the advantage of having two-and-a-half weeks to focus in on one race, while everyone else has had to focus on two races in between that, that’s been a big deal and I think we’ll see a good-sized one reward later on.”

NASCAR primers:What to know about championship weekend at Phoenix Raceway