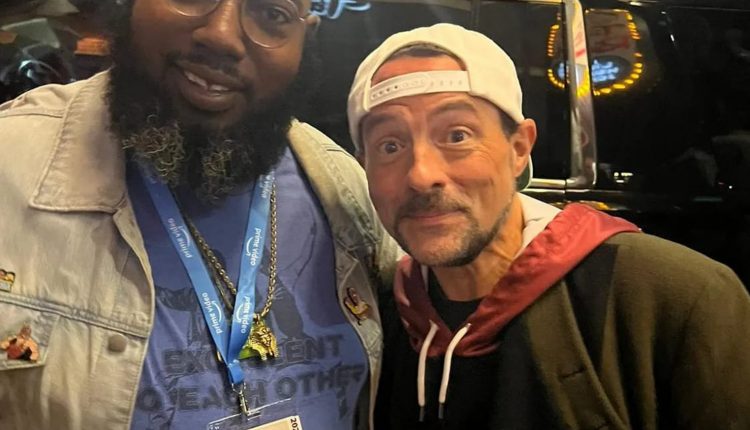 Phoenix New Times’ 2018 and 2019 Best Rapper Teek Hall flew out to San Diego a few days ago to seek out the best marijuana comics and found more than he ever could’ve imagined.

“This is a bucket list moment right here,” he exclaimed in a New Times phone interview while in San Diego. “I’m at night one of Comic-Con International: San Diego!” Even for San Diegans, it isn’t easy to access the half-a-century-old comic book and pop culture convention, which ran from July 21-24. So for a metro Phoenix pot smoker to get a professional badge to enter the enormous extravaganza, it’s a huge deal. Pre-pandemic, the annual show drew 130,000 attendees; this was the return of the full-blown four-day show since 2019. “I’m out here with Mega Ran reppin’ the Mat Mania Podcast on Friday at the Geekscape booth,” he said.

Hall and Mega Ran, another local rap artist, speak about professional wrestling news on their podcasts, produced and aired right here in the Valley. Geekscape, “a community of writers and readers who love geek culture,” brought the two Arizona rappers to San Diego to do an episode.

“I’ve always wanted to attend this show,” Hall added. “I’ve been an artist and drew smaller comics when I was younger. I also have tried my hand at script writing.”

This first time attending the Con was a dream come true for the 37-year-old “Mr. T” rapper straight outta Mesa, who doubles as a quality-control specialist by day.

But this geek “hits a bit different.”

“I am currently an everyday smoker,” Hall said, noting that it elevates the comic book collecting and reading experience. “Weed helps to emerge yourself fully into the comic book or the story. You are expanding your imagination and picturing yourself in that world.

“I also still prefer [print and bound] books rather than reading comics on a phone or tablet.” So he set out to find comic books to add to his collection. And while he was mingling with the thousands of attendees throughout the 2.6-million-square-foot San Diego Convention Center, the “Unicron” lyricist, by happenstance, bumped into a fellow weed and comic book enthusiast.

“I was able to experience the Kevin Smith podcast, Fat Man Beyond,” Hall said. “He (Smith) is a big weed advocate and mentioned that after day one at Comic-Con, he was ready to smoke all the weed!” Hall then snapped a selfie with Smith, the creator of the Bluntman and Chronic comic book, which cameoed in the 1997 Chasing Amy romantic comedy-drama movie. “This was also on my bucket list to meet with Kevin Smith.”

When asked if Hall smoked out with the Jay and Silent Bob originator, Hall responded, “No, because of COVID still lingering around, and Comic-Con’s strict mask policy, I didn’t smoke with anyone. But I smoked and stayed high the all the time I was out there.”

After Hall and Mega Ran wrapped up their interviews about their wrestling podcast, the tag-team rap artists proceeded to geek out with the cosplayers, including some folks dressed as Bluntman and Chronic and Jay and Silent Bob. Afterward, Hall smoked more herb, and then sought some comic books to bring back home to the Valley.

New Times compiled a list of Hall’s eight favorite comic book titles for stoners. While some contain weed content, others are good reads for those who are on a good trip.

Bluntman and Chronic was a trade paperback with three comic book stories released in 2001 by Oni Press. In one story, Kevin Smith’s Jay and Silent Bob characters win the lottery and become superheroes, donning the monikers Bluntman and Chronic. Both names derived from how a joint and weed were coined in the 1990s. Used versions of this book start at $9.34 on Amazon.

The Boondocks was a comic strip featured in The Source hip-hop magazine in the 2000s. It’s about a fictional Black family, the Freemans, who moved into a predominantly white neighborhood. The comic strip became an animated series for the Adult Swim channel, Cartoon Network’s nighttime programming slots.

south park was a circa-1997 Comedy Central adult-natured cartoon that tackled socially relevant issues and showcased crazy hilarious dialogue. One of the aired episodes revolved around a medical marijuana dispensary. While there’s no official comic book that features the characters Stan, Kyle, Kenny, and Cartman, there is the South Park Guide to Life, a book packed with comic strips and lines from the TV show.

Ren and Stimpy originally was a cartoon about the dog Ren Höek and Stimpy the cat, which aired on Nickelodeon. In 1992, Marvel put out a comic book titled The Ren & Stimpy Show #1, which came with a scratch-and-sniff air fouler that stank up then-weed smokers’ rooms pretty bad. The comic book is selling on eBay for $7 and up.

Afro Samurai was a manga, a Japanese comic series, in a magazine about a warrior named Afro Samurai who seeks his father’s killer. Hall loved the storyline and art so much that he made a rap album, Number One HeadBand, dedicated to the manga.

Batman comic books have some of Hall’s favorite storylines, particularly those that feature the Poison Ivy antagonist. Poison Ivy is a biochemist and botanist with a toxic touch like the plant that is her eponym. She can command plants and weeds to do her dirty deeds against Batman and Robin and the citizens of Gotham City. In a recent “Leaves of Grass” storyline, Poison Ivy connected with Floronic Man, a bad guy in the DC Comics world, to get the inhabitants of Gotham City high.

SpongeBob Comics is a comic book series based on the SpongeBob SquarePants animated TV show. Bongo Comics published and distributed the comic book. Hall noted, “You gotta be high to come up with and enjoy that.”