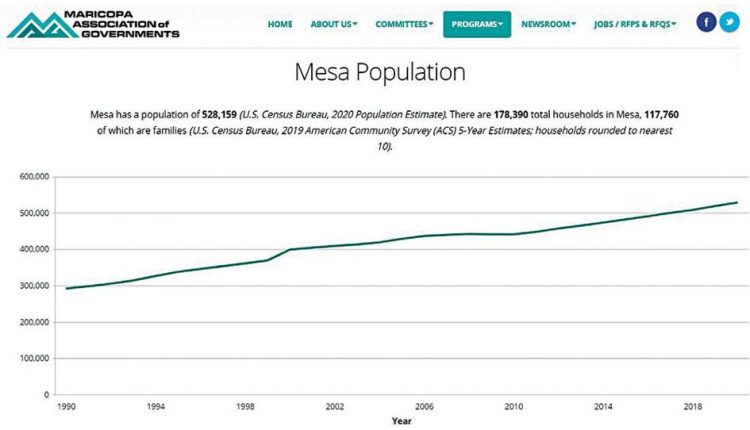 Mesa tops half a million, but not Tucson | news

Although the U.S. census shows Mesa’s population has grown to over half a million and cemented its rank as the second largest city in Maricopa County, it was still far from previous projections.

According to census information released by the Maricopa Association of Governments, Mesa’s official new population is 504,258.

This population is greater than the number of people living in Pinal County (425,264) and second only to Maricopa County after Phoenix (1,608,139).

While some thought Mesa could challenge Tucson as the state’s second largest city, it’s not even close: the Tucson census was 542,629.

“The city of Mesa has grown significantly in the last decade and is now officially home to over half a million people,” said Robbins.

“We remain the second largest city in the greater Phoenix-Mesa area and one of the 50 largest cities in the United States.

Given the explosive growth of Eastmark and Cadence, where some 20,000 people took root in the past five years, some might wonder if Mesa was “knocked down” by the counters.

“While the city of Mesa cannot speak about the accuracy of the 2020 US census or the estimates and projections from the US Census Bureau or other agencies, discrepancies are not uncommon historically,” Robbins said. “We experienced similar deviations in estimates in 2000 and 2010.”

If the number was low, this could be put under “Covid to blame”.

“We acknowledge that the 2020 census was conducted in unprecedented circumstances, but we cannot speculate how far the pandemic has affected the population of Mesa,” Robbins said.

The census triggers a “redistribution,” the process of reorganizing Mesa’s six city council districts based on where they live.

Comments on the reallocation can be emailed to. be sent [email protected].