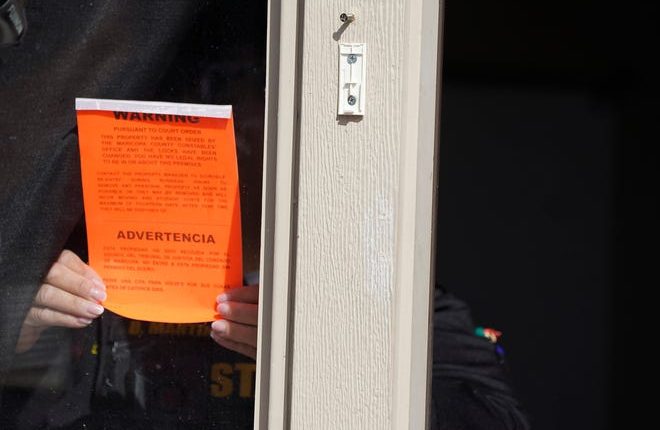 The increase corresponds with deadly Arizona incidents this summer involving constables serving tenants documents forcing them to move out.

Last month, there were 6,574 new eviction filings, according to the Maricopa County Justice Courts. That’s the highest monthly tally since October 2008, when Arizona and the US were in a deep recession.

In late August, Pima County constable Deborah Martinez-Garibay, an apartment complex employee and a resident were killed in Tucson when a tenant was served an eviction notice. The tenant also killed himself, police said. In July, a Phoenix constable shot and killed a tenant while serving a notice.

Both cases are being investigated. It’s legal for constables to carry guns in Arizona.

The Tucson and Phoenix deaths have spurred some lawmakers and tenant advocates to call for changing the eviction process.

“What happened to Constable Martinez-Garibay and the other victims in Tucson is horrifying and inexcusable,” said Groninger.

The Arizona deaths have contributed to a troubling summer for tenants and law officers nationwide. Killings during evictions have also occurred in Texas, Oklahoma and Florida.

“The eviction process isn’t working. It failed four families in Tucson who lost loved ones,” said Pima County Supervisor Dr. Matt Heinz. “I think we should bench all constables for their own safety until we can make the system for evicting tenants safer.”

Maricopa County eviction filings have climbed above pre-pandemic levels this year. In July, there were 6,504 court filings against tenants.

The current pace of metro Phoenix evictions is nearly triple what it was during the first year of the pandemic.

Eviction filings fell in 2020 and most of 2021 due to moratoriums for renters who could show COVID-19 affected their health or income. the final moratorium ended in August 2021, and Maricopa County evictions have been trending up since then.

The Arizona Multifamily Association said that some of the increase in eviction filings is because the state’s population has grown since 2008.

“August filings rose for the fourth month in a row, once again ending at their highest level, post-pandemic,” said Scott Davis, spokesperson for the Maricopa County Justice Courts.

Most states have constables, police or sheriffs serve eviction notices.

Constables in Arizona are elected and receive training through the Constable Ethics, Standards and Training Board.

Heinz said Arizona doesn’t need constables, and police or sheriffs should be serving eviction filings because of their extensive training and oversight.

He said he doesn’t want to fill Martinez-Garibay’s constable position because that would be “putting someone else in a dangerous position.”

Three constables served the tenant who was shot and killed in Phoenix in July.

Maricopa County Constable and President of the Arizona Constable Association Scott Blake said constables do their homework. They know if they are going into a situation with an angry and possibly violent tenant.

He said in those situations it’s good to serve the filing with another constable if one is available.

Blake said he couldn’t comment on either recent shooting because the investigations are ongoing.

“It will likely take legislation to change the evicting-serving process in Arizona,” said Heinz.

Yavapai County Judge Dennis Dowling, chair of the Constable Ethics Board, said he would need to read reports on the investigations before considering any changes to the process.

Watch: The Mysterious Death of a Congressman’s Wife