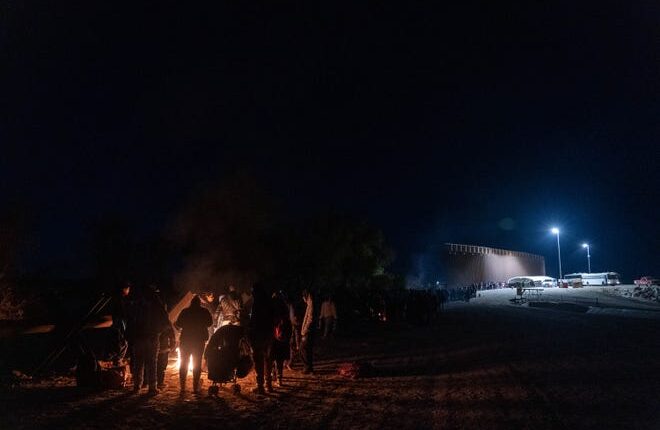 The number of migrant encounters along the country’s southwest border rose by roughly 4% in November from October as the future of a Trump administration border restriction remains in front of the US Supreme Court.

A total of 204,155 unique migrant encounters occurred along the US-Mexico border in November, which does not include numbers for repeat crossings, according to US Customs and Border Protection data.

CBP attributed the uptick in encounters to a large number of people “fleeing failing communist regimes in Nicaragua and Cuba.” Migrants from Cuba or Nicaragua made up about 35% of the unique encounters at the southern border in November, according to CBP.

Unique encounters with migrants from Nicaragua and Cuba, countries whose citizens are largely exempt from being rapidly expelled under the Title 42 restriction, rose more than 55% from September to November at the southwest border.

The future of Title 42 remains uncertain for now. The Supreme Court decided Monday to grant an emergency request by 19 Republican state attorneys general who intervened in support of the policy. The court will hear oral arguments and rule on whether the states can intervene, with a decision due by the end of the court’s next term in June.

In the meantime, the border restriction that was set to end Dec. 21 will remain in effect. The pandemic-era health policy allows border officials to quickly expel asylum seeking migrants to Mexico or their home countries.

Yuma County: Release of migrants onto the streets of Yuma County averted, for now

Unique encounters with people from Mexico and northern Central American countries decreased by a little more than 4% from October to November along the southwest border.

Migrants from these countries accounted for about 30% of the unique encounters at the border in November, a drop from the 53% they represented at the same time last year, according to CBP. Migrants from Mexico and the northern triangle countries of Honduras, Guatemala and El Salvador have long been subject to removal under Title 42.

While encounters from Nicaragua and Cuba increased, CBP touted its newly implemented immigration process for Venezuela, which has led to a significant decrease in the number of encounters with Venezuelan migrants.

The new process, which was announced in October, allowed border officials to swiftly expel some Venezuelan migrants to Mexico if they enter the country between ports of entry or without authorization.

The process also included a humanitarian program that would allow up to 24,000 Venezuelans into the country, given they have a supporting sponsor in the US and after completing a rigorous application process from Venezuela.

After implementation of the process, unique encounters of Venezuelan migrants along the southwest border decreased by more than 81% from September to November, according to CBP data.

Venezuelan encounters dropped from about 1,100 a day during the week before the process was announced to a consistent rate of roughly 100 a day throughout November, according to CBP.

Advocates have criticized the process, which effectively expanded Title 42 to include a previously exempt nationality, as discriminatory against Venezuelans who don’t have contacts in the US and/or migrants who may have already begun their journey when the program was announced.

The Yuma sector experienced about a 1% decrease, with 24,751 total encounters in November.

Have a news tip or story idea about the border and its communities? Contact the reporter at [email protected] or connect with him on Twitter @joseicastaneda.