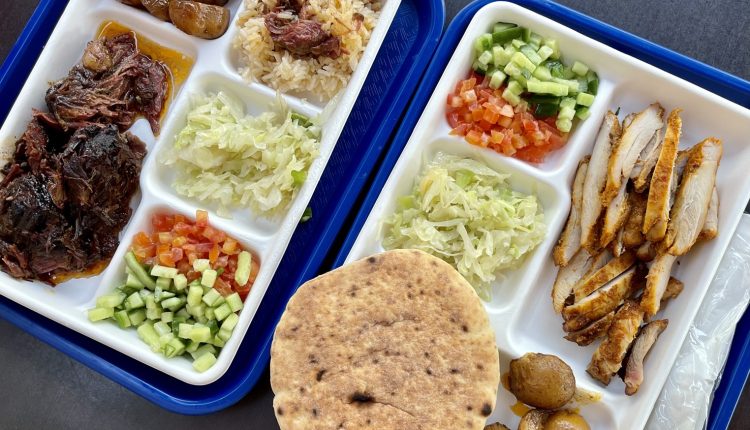 “Are you looking for a big truck or something to eat?” Netanel “Nate” Harat calls out, standing on the curb on Pierson Street.

Definitely the food, we reply. With a toothy grin and a wave of his hand, he turns and leads the way through the parking lot to his tiny restaurant adjacent to a used car shop at the north end of Phoenix’s Melrose District.

“It used to be a jungle,” he later explains while sitting at a table in his new pop-up, Mika’s Kitchen.

“I’m friends with the owner of this building,” he says. “I said, ‘Hey, you’re not doing anything with it, I’m going to make it nice and do a food cart.”

Now, that jungle has been transformed into a shaded patio oasis. A row of tables with white plastic chairs lines a patterned concrete floor. Colorful paintings depicting scenes of Arizona. At the back of the narrow space, a shining stainless steel cart wafts rich aromas into the air.

From that cart, Harat serves a small menu with big flavor. He describes the options as “Israeli street food.” There’s rich, dark, beef that he slow-cooks overnight, grilled chicken, which starts marinating in a fragrant spice rub the night before, and sabich, a pita stuffed with roasted eggplant and hard-boiled eggs that Hatal explains is “primarily tailored to the Israeli community.”

The recipes and dishes are inspired by his mother, Mika, after whom he named the restaurant, and his bringing up in Jerusalem.

“We talk almost daily. She shares recipes with me, I’ll share with her,” he says, noting that his mother recently made his slow-cooked beef for friends at home in Isreal, who loved it.

Hatal moved to the US when he was 22. He first studied in western Pennsylvania before joining the architecture program at Kent State University in Ohio. While studying, he also worked at the school’s bakery for three years, learning the industrial side of running a kitchen. He applied what he learned to cook meals for fellow students.

“It was almost on a weekly basis I would cook for my friends, and it grew and grew,” he says. “Whenever I told people we were having dinner, they’d say ‘Yes, we’ll be there.'”

After changing his major and graduating with a degree in finance, Harat moved to Missouri. In 2007, business ventures brought him to Phoenix, but throughout his travels and career changes, the memories of his mother’s kitchen stuck with him.

Over the years, Harat learned her recipes.

“She’d teach me. She wouldn’t necessarily let me cook with her at the same time she cooked because I would get in her way, but she taught me a lot,” Harat says, joking that “on the contrary, my father who has lived with her for nearly 50 years, he knows how to make an omelet.”

Netanel “Nate” Harat owns Mika’s Kitchen, which he named after his mother.

Despite his lifelong love for cooking, Harat never received any formal culinary training. He decided to turn his passion into a business thanks to a friend who was throwing a party. The friend unsuccessfully searched for a catering company that could cook Israeli food for his event.

“Jokingly I told him, ‘I’m going to do it for you; you just buy the ingredients,'” Harat says. That joke became a reality, and even though the invitation list expanded from close friends and family to more than 100 people, Harat made the food.

“When I did the catering event for my friend, people approached me and said ‘Hey, do you have a business card?'” Harat says.

The experience of watching people enjoy his food inspired Harat to make plans for his own business. Thinking back to that party, and other times when he cooked for friends at college and beyond, Harat remembered which dishes had always been a hit. Those would make up the menu.

The chicken is rubbed with fragrant spices and marinated overnight before it’s grilled and served.

He uses many of his mother’s methods but experiments with ingredients that he can find in the US The cucumbers and tomatoes are local, and some seasonings can be blended to taste just right. But for other items, the original is a must. The tahini is from Israel, and the soft, fluffy pitas he uses are made by an Israeli company with a factory on the East Coast.

Harat’s custom-built cart includes a steamer he had attached specifically for the pita bread. A refrigerated section holds the fresh vegetables and cabbage salad, and a bain-marie, or heated water bath, keeps the beef and chicken, which Harat prepares at a commissary kitchen space, hot and ready to serve.

The menu officially offers sandwiches and rice plates, but Harat is happy to make whatever combinations customers prefer. Spice and tang are provided by a homemade hot sauce Harat has dubbed “Orange Infresno,” a green coriander and pepper Schug, also known as zhug sauce that Harat explains is a “staple of the Yemeni kitchen in Israel,” and amba, a tangy , bright, salty, and sweet condiment made from mangoes. Fresh and floral rose-flavored lemonade washes it all down.

The hummus is an unsung hero of the Mika’s Kitchen menu.

Creamy, tahini-heavy hummus is also on the menu, served sometimes as a side and other times as a main dish, depending on customers’ wishes, Harat says.

“In the American culture, when you think of hummus, it’s always a dip that goes with something prior to the meal,” he explains. “In Israel, you can actually go to a restaurant where all they do is hummus. They serve you a hefty plate of hummus with tahini and chickpeas and some olive oil, and you get two pitas, maybe pickles, a hard-boiled egg and that’s the whole meal.”

Those in the know order hummus plates, and many of those customers, Harat says, find his cart through Israeli community groups on Facebook.

The flavors, and Harat’s friendly service, are what bring them back.

“I like this organic growth,” Harat says. “That’s the biggest compliment you can get, if somebody comes back. One guy that came, he had a pita sandwich, and within the first two weeks, here was here five times. That makes me the happiest, to see customers come and enjoy . I don’t think there’s any bigger reward.”