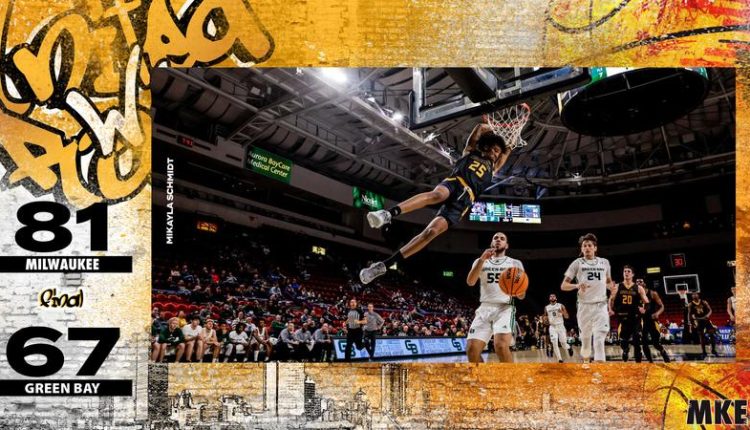 GREEN BAY, Wis. – Strong play from Ahmad Rand and Jalen Johnson helped lead the charge as the Milwaukee men’s basketball team powered past Green Bay by a final score of 81-67 Thursday night at the Resch Center.

The Panthers (6-3, 1-0 Horizon League) used a 12-0 scoring run just into the second half to build a lead as high as 21 to take control, topping the Phoenix (0-7, 0-1 Horizon League ) for the fifth consecutive meeting in the all-time series.

“I thought we were able to wear them down a little bit and were able to get stops and get in transition,” head coach Bart Lundy said. “I thought some of Ahmad Rand’s highlight plays really drained some of their energy. It’s just hard to get road wins… I am proud of the guys.”

Rand led the offense with 13 points, adding six rebounds as well as three impressive dunks and four blocks. Johnson played a crucial role in the first half, scoring all 12 of his points before intermission – while starters were dealing with foul trouble – including eight straight at one point.

“In the huddles we were talking about getting stops and getting rebounds,” Lundy said. “I thought they (Green Bay) were really good on the glass. It just shows how hard we were playing. If we could have cleaned up the offensive glass, we could really have gotten a lot of stops.”

Milwaukee has now won four in a row overall and is 6-3 through nine games for the first time in five years.

“This team is getting better and better,” Lundy said. “We have played a lot of basketball here in the last five or six days, but it’s good for this team to keep playing games.”

Cade Meyer led the Phoenix with a game-high 19 points.

Up 10 at half, Green Bay whittled it down to six with the first four points of the period. Then MKE took over, scoring 12 unanswered to reestablish its dominance, seeing Thomas’ layup at the 13:23 mark extend the lead to 55-37.

The lead grew to 15 on a turnaround in the lane from Vincent Miszkiewicz at 58-43 and Rand then iced the decision with a thunderous dunk and follow-up free throw after a foul to make it 69-48.

Outside of a small stretch where Green Bay pushed back, the Panthers also did well in the first half, finishing the period on a 14-5 run to settle in with a 43-33 lead at halftime.

That was as far as things would get. Browning’s layup had it tied again at 23-23 and Edwards sank a three from the corner to make it 26-23.

The Phoenix was back within one at 29-28 before MKE would score 14 of the next 19, seeing Johnson take over off the bench. He posted his 12 points at just 7:14 on the court, making 4-of-5 field goals and all four of his free throws to power the Panther surge.

Up next, Horizon League play rolls on with the first contest at home, set to host IUPUI at UWM Panther Arena Saturday. Tip time against the Jaguars is set for 7 pm