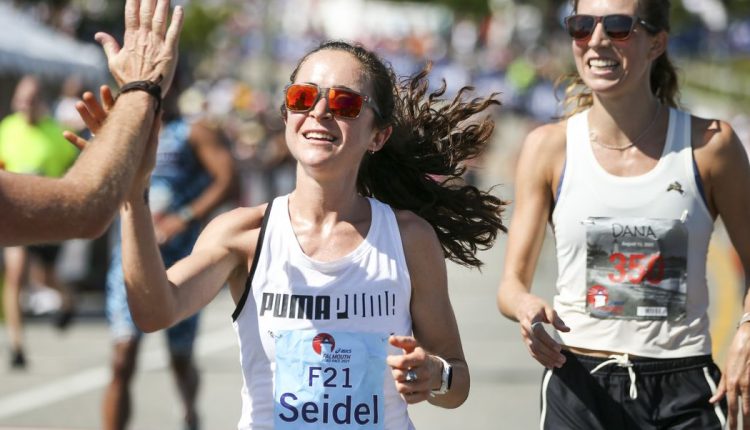 To review: In her first three attempts at 26.2, she exceeded all expectations—she was second in her debut at the Olympic Trials in Atlanta, finished sixth in 2020 in London in 2:25:13 in her second marathon, and won the Olympic bronze medal in Sapporo in oppressive heat and humidity in her third.

By the time she lined up in New York last fall, she was far from an underdog. (She delivered again, finishing fourth in 2:24:42, the fastest time by an American on the course.)

And now, for the 2022 Boston Marathon, she’s a top contender—even though she’s been a marathoner for only about two years.

Adding to her favorite status isn’t just her ability to compete over the distance. She also knows the course well, having lived in Boston for almost five years before she bought a home in Flagstaff, Arizona, last April.

“I have done so much running on the Boston course,” Seidel, 27, said in Boston on April 15 at the elite athlete press conference. “I lived in Fenway and my normal run would be head straight out on the marathon course the wrong way and head back.”

She also babysat for a family in Wellesley (the children of Tracksmith founder Matt Taylor were in Seidel’s care) and she would park at the Whole Foods near the course’s halfway point, run to the top of Heartbreak Hill and back for about 14 miles.

So Seidel is very familiar with the second half of the course and its most difficult sections.

After a few “hiccups” in her training early on, which included a hip impingement that curtailed her training for a few days, the last five weeks of her marathon buildup have been “about as good as I could have hoped,” Seidel said.

“You almost have to reconcile the marathon buildup you want with the one that you get,” she said. “But I think we’re in a really good place now, not only for Boston, but for world champs in the summer, focusing on a lot of the strength as we build for the rest of the year.”

Seidel may be the best American hope, but others are right up there with her.

Stephanie Bruce, 38, who is retiring at the end of 2022, is hoping to place in the top six. Bruce has run Boston only once before, in 2013, and she wanted to make sure she got to the race again before her competitive career ends.

Nell Rojaswho was the top American finisher in Boston in 2021, has been training specifically for the Boston course.

Dakotah Wyvern, 26, who trains with Team USA Minnesota, was 13th in 2:31:04 at the 2021 Boston Marathon, held last fall. She recently completed her first altitude training stint, in Albuquerque, New Mexico, and told Runner’s World she feels she’s in shape to run 2:26 on the Boston course.

Sara Vaughn, a 1500-meter and steeplechase specialist, debuted at the marathon last December, winning the California International Marathon in 2:26:53. She said poor weather in Boulder, Colorado, hampered the first part of her Boston buildup. “I felt like I turned a corner about a month ago,” she said. Vaughn, 35, also said being a relative beginner at the marathon is a blessing. She respects everyone in the field, but she doesn’t put anyone on a pedestal.

Elaina Tabb, 30, ran 2:30:33 at Boston last fall to finish 12th. She is in her first year of teaching high school math—geometry and AP calculus—in Pittsburgh, Pennsylvania, so she runs only once a day, after school. She had spring break last week, which was fortunate timing for the race. “I would love to run a faster time than I did in the fall,” she said.

of the linden, the Boston champion in 2018 and the runner-up in 2011, which was recently named chief running advisor for Brooks. She said her training turned a corner in the past few weeks.

Sarah Lorge Butler
Sarah Lorge Butler is a writer and editor living in Eugene, Oregon, and her stories about the sport, its trends, and fascinating individuals have appeared in Runner’s World since 2005.

This content is created and maintained by a third party, and imported onto this page to help users provide their email addresses. You may be able to find more information about this and similar content at piano.io