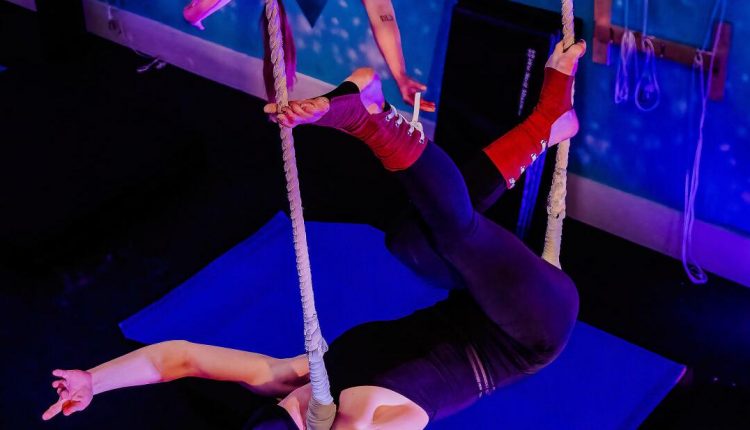 Aerial gymnastics is both an art and a sport, and it’s beginning to take off in Flagstaff. Last week, Momentum Aerial hosted its Trapeze Mini Showcase for advanced gymnasts.

Aerial is no small task, as it requires strength, coordination and balance while dangling at least seven feet in the air from a bar hanging from the ceiling. But the performing gymnasts didn’t let the pressure bother them one bit, as they flipped, spun, swung, twisted and danced to their favorite songs.

The performance was special not only because of the nature of the sport, but also because it was the first time the gymnasts were given the keys to their routines.

The gymnasts coordinated their own routines and practiced them all summer. They chose their own stunts, tricks, and even songs they performed to.

The gymnasts make the gym what it is, and Momentum Aerial is quickly gaining popularity. As of now, the gym welcomes more than 450 gymnasts each week to practice trapeze, silks, lira hoop, ropes and poles.

But why would so many people sign up for aerial gymnastics in small-town Flagstaff?

Ask Louvier and she’ll say it’s the sport-art, or “Spart,” combo that aerial gymnastics is. Flagstaff is an ideal location for aerial because the community is both artsy and active, she said.

Louvier, who grew up in the sports hub of Phoenix, found aerial after trying almost every other sport and not liking them. She wanted a sport that would give her an athletic advantage while helping her conquer her fear of heights, and at the age of 12, Louvier landed on aerial.

“The more that I kept doing it, my dad started to do it,” Louvier said. “We started doing classes together, and pretty soon, I was attached to it. Trapeze was the one for me.”

Louvier has been coaching in Flagstaff for more than eight years and said she grew a following in the community. In 2017, she partnered with Joanie Garcia, who also coaches gymnastics, to found Momentum Aerial.

“We decided to start our business together and never looked back,” Louvier said. “It was the best decision we could have ever made.”

Like most businesses, Momentum started small. But over time, people started catching on to the world of gymnastics.

“It’s grown to be something that I never thought that it would be,” Louvier said. “And it’s awesome.”

Louvier said part of the reason people enjoy aerial so much is because it’s forgiving of mistakes; aerial is a vulnerable sport because gymnasts dangle above the ground and have to keep their balance and coordination throughout a whole routine. If a hand slips, it could mean falling to the mat below.

The nature of the sport makes it one where coaches and teammates are positive when mistakes happen. They understand the challenges of aerial and seek to make gymnasts comfortable while in the air.

“The community is incredibly supportive,” Louvier said. “We set boundaries and rules to make gymnasts feel safe. We open up to hear positive feedback and encourage a cheerful and supportive environment.”

Avril Flory, a student at Momentum, echoed Louvier’s thoughts: “Teamwork is huge, support is definitely essential to build the comfort to try difficult things,” she said. “It can be embarrassing when you aren’t able to do a move right for the first time but then another classmate can do it perfectly without even thinking. So the ability to support each other is just really useful.”

Teamwork and support was on full display at the performance, as teammates cheered for themselves before, during and after every routine. They chanted cheers of support and gave high-fives. Flory described the camaraderie of aerial teams as “fairly unique in the sports world.”

Having practiced aerial since the age of 11, Flory understands what aerial means for its performers. For Flory, aerial was a way to ground herself. She said life presents school, family matters and other stressors that can break a person. But aerial helped her get away from it all and find peace.

“Aerial has been really important to me to kind of get out of my head,” Flory said. “It’s been a really good way for me to stay myself amidst the chaos.”

During the performance, Flory chose to perform a beautiful number to the dramatic song “Me, Myself and I” by LIENNE. She flipped, twisted herself in the bar, and hung upside down from the bar while maintaining steady composure. It was bold, intimate and absolutely stunning.

“That performance was refreshing,” Flory said. “I love performing, I love the excitement, and I love getting to show people what I can do.”

Flory has high praises for Louvier, calling her her “biggest role model,” and adding, “She’s just an amazing human being and so supportive of everything inside and outside of aerial.”

Though Flory is going to Northern Arizona University in the fall, she’ll remain at Momentum to continue practicing with Louvier.

Louvier encourages anyone to try aerial, regardless of strength or previous experience.

“Everybody starts someplace and we have really accessible stepping stones,” Louvier said. “Everybody can start at the first stepping stone and each class builds off of the one before, so you gain strength by coming to class.”

As aerial gymnastics gets bigger and bigger, so does Momentum gym. It’s so popular that the phone lines during the first days of August were all booked with callers looking to register for the fall season.

The performance marked the end of the summer season, and Louvier couldn’t have been more proud of her gymnasts.

“It was emotional, vulnerable, it had style, and it challenged the gymnasts with creative transitions,” Louvier said. “It was amazing to watch all of these guys perform the pieces they’ve been working really hard on all summer, and it just felt so good to see that they’ve blossomed into amazing aerialists.”