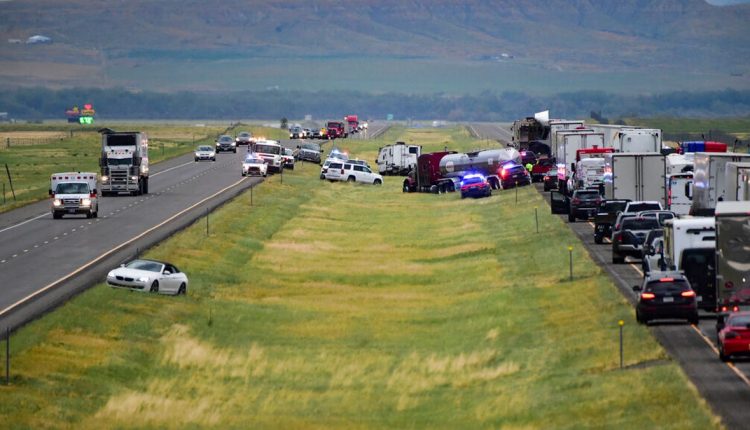 Six people dead in a vehicle pileup on Montana highway

The wind gusts were topping 60 mph, causing a dust storm with zero visibility.

Friday night brought severe weather that turned deadly in parts of the country, including a dust storm that led to a massive pileup on a Montana interstate and rushing floodwaters in Colorado.

A dust storm on Interstate 90 in Montana caused a pileup of 21 vehicles Friday evening, Montana Highway Patrol Sgt. Jay M. Nelson told USA TODAY. Six people, including two juveniles, died in the crashes, and eight others were hospitalized for their injuries.

Severe flooding Friday night in northern Colorado’s Buckthorn Canyon swept away a home and killed a woman and child inside, authorities said.

Weekend Forecast: The Plains and the Midwest now face a threat of thunderstorms through the weekend, according to AccuWeather. The storms are expected to target parts of the northern plains on Saturday before shifting south and east Saturday night.

There was “zero visibility” during the dust storm on Interstate 90 in Montana, which witnesses said stretched for over a mile long, Nelson said. Video from the scene showed scores of tractor-trailers and cars backed up for miles along two eastbound lanes.

“This was sort of an unseen extreme weather event that came up,” Nelson said. “In Montana, we don’t usually have dust storms storms to the extent that there’s zero visibility.”

Authorities did not immediately provide additional details on the conditions of the people who were injured.

Nelson said the nearest hospital to the pileup, which took place three miles west of the small southern Montana city of Hardin, which was “quickly overwhelmed with the number of injuries.”

“With 24 years on the Montana Highway Patrol, I can’t recall a crash of this significance,” he said. “…Our thoughts and prayers go out to the families of people who tragically lost their lives.”

gov. Greg Gianforte said he was “deeply saddened” by news of the crash.

Severe flooding Friday night in northern Colorado’s Buckthorn Canyon swept away a home and killed a woman and child inside, authorities said.

Among these calls were reports that a camping trailer had been washed away with a woman and female child inside. After crews searched for them, both were found dead Friday evening, Moore said.

Floods inundated the rural Buchanan County in Virginia earlier this week, destroying or damaging more than 100 homes. No injuries were reported, and all residents reported missing were found.

As floodwaters receded, work remained for crews and community members grappling with the damage.

Community organizations have banded together to pack and ship a truck of supplies to victims of the flood, the Winchester Star reported. Groups from across the state have made their way to flood-ravaged Buchanan County to help provide meals, according to the Kingsport Times-News.