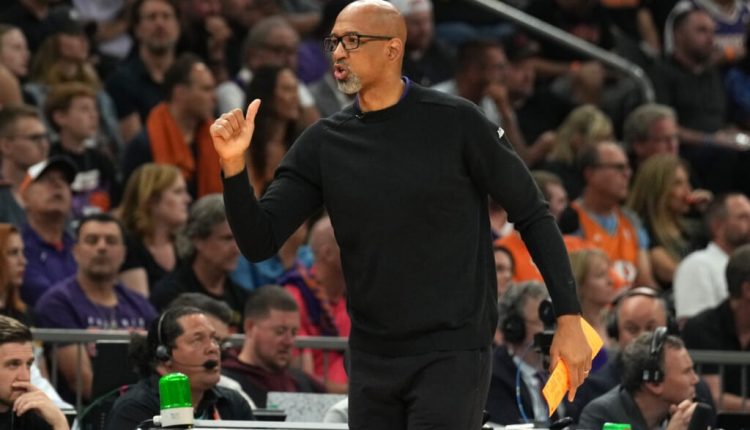 It took longtime NBA coach Monty Williams some time to earn a head-coaching gig after some success with the New Orleans Hornets/Pelicans from 2010-15.

However, the highly-respected basketball mind has helped turn the Phoenix Suns into a juggernaut since he took over as their head coach ahead of the 2019-20 season.

Williams, 50, has now been rewarded for it. Suns star guard Devin Booker took to social media on Monday to report that Williams has won the 2021-22 NBA Coach of the Year award. Other NBA insiders verified his report, too.

This really shouldn’t come as too much of a surprise. The top-three candidates were Taylor Jenkings of the Memphis Grizzlies, Toronto Raptors head man Nick Nurse and Williams himself.

Fresh off leading Phoenix to the NBA Finals last year, Williams helped the team post an NBA-best 64-18 record during the 2021-22 regular season. This represented the team’s best record since it entered the Association as an expansion team back in 1968-69.

This announcement comes with the Suns mired in a difficult Western Conference Semifinals matchup against the Dallas Mavericks. They won both games at home before dropping each of the two outings in Dallas leading up to Game 5 in the desert Wednesday evening.

Since taking over as the Suns’ head coach, Williams boasts a 149-78 regular-season record. Their success under him started in the Orlando Bubble after the 2019-20 season was suspended during the COVID-19 pandemic.

Williams led Phoenix to eight consecutive wins in the bubble, barely missing out on the play-in tournament in the process. Including those eight games, Phoenix boasts a 123-39 record in its past 162 regular-season games under Monty Williams.