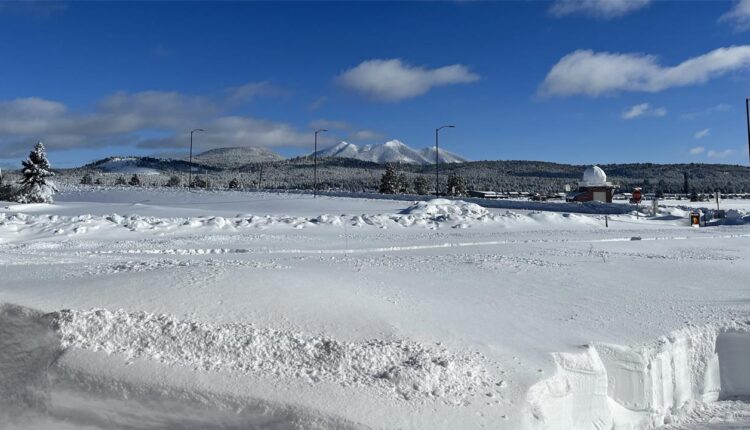 PHOENIX — About 36 inches of snow blanketed Flagstaff during this week’s winter storm, and forecasters say more is on the way in the coming days.

Flagstaff has nearly doubled its usual snow amount by this time of year and is closing in on its typical season total of about 90 inches, Reggie Roakes of the National Weather Service in northern Arizona told KTAR News 92.3 FM on Wednesday morning.

“Normal for Flagstaff is around 40.2 [inches]but this year we’re already at 74.6 there at the airport – well above,” Roakes said.

Drier weather expected today once we get rid of these lingering showers. Another system is expected later Thu. into Fri. that will bring 2-8 inches of new snowfall into the high county. Driving conditions will be impacted by this. Check https://t.co/j8hirxDJf0 for the latest! #azwx pic.twitter.com/YtWYd9zxYF

Northern Arizona University closed its Flagstaff campus Tuesday and Wednesday because of the wintry conditions. Classes were set to resume Thursday.

State Route 64 near the Grand Canyon, between mileposts 241 and 268, has been closed since Tuesday.

“It looks like it will be closer to what most people around here would probably consider a more normal system,” Roakes said.

“But that said, just with all the snowfall that we’ve had, and with it not really going anywhere, impacts will still be expected with it just because there is already so much snow on the ground.”

300 campers stranded at Catalina State Park in Tucson due to flooding: report